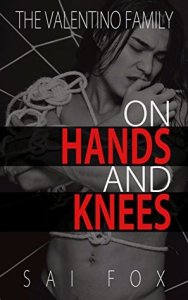 Nicolai Valentino is the almost perfect heir to the Valentino Family—impeccably dressed, devilishly handsome, impossibly cold, and absolutely dedicated to a family that scorns his very existence. Born to the infamous Boss and a Japanese woman of no consequence, Nico must fight for respect in a blood-thirsty world that would be much happier to see him with a hole in his head.

Blood runs thick in the Valentino Family. To them, Nico’s little better than water.

Gabriel Delatto is Nico’s right-hand man, his childhood friend, and under the darkness of their ruby red sheets, his lover. But more than that, Gabriel holds the secret to unlocking who Nico really is—the true Nico, not the mask beginning to crack around the edges.

But there is a pleasure in that pain, he knows. There is only ever pleasure when it comes to Nico, even if it comes from the crack of a whip or on the edge of a blade.

But there’s someone lurking in the darkness, something that neither Nico nor Gabriel truly understand, But there is one thing they do know—

It isn’t afraid to bite.

I had a tough time with the rating on this story for several reasons. On Hands and Knees (The Valentino Family) by Sai Fox was a new title and author for me so you all know I immediately read the author bio and information.  She’s been writing for years. She’s currently living in Japan. Pluses. That leads me to more pluses and minuses of this story.

I’m drawn to stories with complex, dark characters and this promised two.  As I got into the novel, there are multiple mysteries surrounding both main characters of Nico and Gabriel, their traumatic childhoods, and yes, even a present timeline going back 6 months.  The author presents clues but nothing more.  There is really only the barest of world building here and little character framework other than their twined childhoods after a certain age, an implied horrific “Training” they endured by The Family as kids, and the present romantic/physical relationship which is barely tolerated,  and that might end at any moment, It also includes a D/s element (spanking, whipping) .

The story is heavy on sex, light on  layered character development.  We are more told how crazy Nico is than shown except for one rather mild example.

What the story relies on is promise.  The narrative offer is held out for more.  More revelations, more character growth and depth.  Of the two men, Gabriel is easier to relate to but you should be able to relate to both and that really doesn’t happen here imo.  Nico just isn’t given the dimension he needs outside of the sex scenes.

Then there is the issue with the editing.

Here is an example:

“There were scars crisscrossing his skin, leaving perfectly puckered and raised lines for Gabriel to stare down at in complete and utter awe. They were mostly pale brown, not deep enough to leave lasting damage or scar but enough for Nico to feel.”

Well, the author meant bruises or welts from the whipping from a belt earlier that morning but used the word “scars” instead.  That’s only the first of many such errors.  Plus these two men are supposed to be keeping their relationship on the down-low yet plenty of people within the organization have heard the “screaming” going on from their sessions.

The story ends on a cliffhanger with a new element introduced that’s interesting but makes little sense with what the author has already told us.

I have no idea if I’m going further with this series or not.  Probably with one more story just to see how the cliffhanger is resolved.

I will leave someone else to comment about the timing of the sessions (in an office right before an important meeting of the Mafia), the lack of safe words etc., and other aspects of the D/s relationship.  I think I’ve covered plenty here.   If this sounds like this is the story for you, the buy links are listed below.

Cover Artist: Samantha Garrett, the cover art is ok.  The font is easy to read but the graphics are dark and murky which may be what the artist was going for but it loses something in the composition.

Author Note: Please be advised that there are sexual scenes of explicit graphic nature, including spanking, within the following story. These are done in a fully consensual manner between two parties over the age of 18