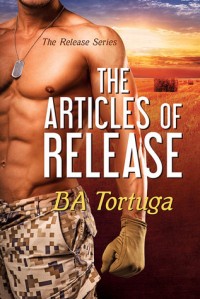 Just released from the military, wounded warrior Eric Tremaine is trying to put his life back together like the doctors reassembled his shattered leg. He’s a man with no home, since his Louisiana family rejected him, so Eric winds up in Texas with his old Army buddy, Adam Winchester, and his lover, Sage.

When Eric decides to stop sitting on his ass feeling sorry for himself, he is introduced to trainer Troy Daniels, who lost both his legs in a teenage accident. Troy knows what it’s like to feel as if your body is your enemy. While Eric and Troy have a bumpy start, they soon find enough common ground to make a friendship, if not more. But taking it to the next level means finding out what they have to offer each other, and the world, before they can trust that the love they find together won’t cause more pain than pleasure.

Each of the books in BA Tortuga’s new Release series deals with a character grappling with a torturous reentry into society.  The first novel, The Terms of Release, has Sage Redding dealing with being a ex-con returning to the small town that condemned him to close to 10 years of hard time in a state penitentiary at the age of 18.  And for a crime that may not have been his fault.  In that story, Tortuga bluntly describes the discrimination ex-cons face upon release, the terms of said release and the accompanying difficulties of losing so much of your life away from the “main culture” that you can feel alone and adrift once you are back trying to find your way inside a community once more.  That same thread is picked up again in The Articles of Release, book two in The Release series.

Making the argument (and proving it) that there are more ways of separating a person from society and community, here its injured vet Eric Tremaine who is coming out of the army, trying to adjust to a new status and situation he never wanted or thought would happen.  A explosion and severe body trauma ended Eric’s military career, leaving him full of rage, pain, and no direction to his life.  A Cajun (a familiar and well loved region for Tortuga) bereft of family, their choice, Eric turns to the only person he can think of, Win Winchester (The Terms of Release), an old Army buddy.

When BA Tortuga is clicking on all cylinders with her writing, as she is here with this series, she not only creates these unbelievably realistic tough, wounded men, but makes us pull for them in their recovery by ushering us intimately into their thoughts and feelings.  Doesn’t matter whether its their out of control “just throw shit” anger or feeling so helpless that they need to break down and sob, either way we are there with them 100 percent of the way because BA Tortuga has made them flesh and blood and vulnerable.

When Eric seeks the help and support of Win, he also gets Sage’s as well.  Sage is still undergoing therapy for the operations needed in the aftermath of the events in The Terms of Release.  Sage proves not only a sounding board for Eric but a curiosity of a man and relationship mentor.  Sage is also his introduction to trainer Troy Daniels.  Troy is a double amputee with a need to prove himself and everything sexy Eric finds in a man.

That’s four dynamic characters, although towards the end Win spends most of the time traveling so its down to Sage, Eric and Troy. No this is not a m/m/m.  Its strictly friendship between the two couples which I appreciated. All three have been through horrific ordeals and hard times, and primarily in the case of Eric and Troy,  still working their way through their physical and emotional issues.  Again BA Tortuga handles their problems and the manner in which their pain and avoidance issues manifests itself authentically, sometimes with humor, sometimes with frustration and rage.  Whatever the situation, my attachment to these men and their relationships is so deep that my attention never wavered. These four characters form such a strong foundation for this story that I could really have kept reading for another 100 to 200 hundred pages at least.

I love The Articles of Release.  I got Sage and Win from the first story and a wonderful new couple in Eric and Troy.  This story has so many layers  to it.  The wounded veteran adjusting to his new civilian life and physical restrictions, the double amputee growing up and dealing with his need to prove himself in risky situations, that being a amputee doesn’t end your sex life, along with Sage and Win’s new life, so many defining moments for each character and for the story itself.

I highly recommend this story and the series to date.  I  certainly hope BA Tortuga intends to continue it.   She’s really onto something here and I hope to see what the next book in the series might bring.

Cover art by Bree Archer.  I like the cover, yes its another torso, but at least it has the appropriate military garb and background.