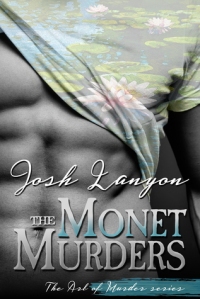 All those late night conversations when Sam had maybe a drink too many or Jason was half falling asleep. All those playful, provocative comments about what they’d do when they finally met up again.

Well, here they were.

And it’s starting to feel like Sam is not thrilled with the idea either.

But personal feelings must be put aside when Sam requests Jason’s help to catch a deranged killer targeting wealthy, upscale art collectors. A killer whose calling card is a series of grotesque paintings depicting the murders.

Nothing I love better than diving back into a Josh Lanyon murder romance.  I love the tight writing, the skillfully constructed mysteries and the complex  relationships between the main characters.  It’s never, never an easy romance.  The obstacles between the men are often huge, sometimes or frequently of their own making, and by the end of the story, it can still be a question mark as to if they are together or will stay that way.  On top of dealing with their own issues and that of their personal dynamics, they have their cases and killers to deal with.  It’s just outstanding!

When The Monet Murders story picks up, the conflicted relationship of Jason West and Sam Kennedy, two FBI agents is again in an uncertain stage.  It doesn’t help that FBI Special Agent Jason West’s Art Crimes Unit is in Los Angeles and Sam Kennedy is in Quantico, VA in the Behavioral Analysis Unit as their Chief.  What it takes to bring them together again, at least physically is a murder or three, all starting with a phone call from Sam.

It kicks off with Jason at the special dedication gala of a museum wing for his grandfather.  We get another peek into the prestigious family background and makeup that belongs to Jason West.  More of that will be filled in later as the story progresses.  It’s a call to action and one that Jason eagerly answers as it means that he will be seeing Sam once more.

Lanyon gives us a crime scene under the Santa Monica pier that starts us off on the  Monet Murders and the reunion of Jason and Sam.  Needless to say nothing about that crime scene bodes well for the couple or for the case.  The LAPD called them in but some of the local cops aren’t happy about having the FBI there, it seems to tie in with another case Jason and  Sam are already working, but then again maybe not.  Muddied clues abound as does the relationship (or non relationship) between Jason and Sam.  The stress and tension is vivid, pouring off the page, a testament to the author’s ability to create just the perfect atmosphere for this scene and meeting.

A fake Monet, so poorly painted as  to be garish, ties more murders together.  As the investigation continues and Jason’s case opens up further leads to involve older crimes, I was just completely hooked.  I love the art elements here, and the mysteries (and side stories) were completely fascinating.  Woven in between the various investigations and detective work, is the romance and shaky relationship between Sam and Jason.  As before, the sex scenes between these two are combustible, making it even harder each time Sam pulls away.  How I love these two even as I want to throttle Sam.

There’s a scary island full of graveyards, some terrific action/suspense scenes to have you quaking as you read and enough plot twists and turns to keep the mystery lover satisfied.  The romance too had an ending that I just loved, although this is Josh Lanyon and her characters so you know I want to add a for now here.

The Monet Murders (The Art of Murder #2) by Josh Lanyon is a splendiferous book.  It left this reader satisfied on so many levels, the mystery lover adored the murder mysteries and how the case was solved, the romance lover can’t get enough of this couple, their convoluted relationship and their path to HEA or whatever they are going to end up with.  The Art of Murder series is ranking high on my all time favorites with just two stories so far so I can’t wait to see what book three brings.  I highly recommend them.

Cover by Johanna Ollila.  I like the cover with Monet’s Lilies painting on t-shirt.  Nice.