Alexis Duran is here today! Check out our interview, read the blurb and excerpt and don’t forget to enter the contest at the end of the post!  Happy Reading.

So I was lucky enough to catch Alexis Duran and have her answer a few questions for me.  Here is the fascinating look at Alexis Duran!

Q: I love the title To Catch a Threeve.  Where did that come from?

AD: This is one of those times a title just popped into my head. After I’d come up with the threeves and the plot unfolded in my head, it struck me as perfect (and pretty darn clever, I must say).

Q:Threeve?  Is that something you created or took from established folklore?

AD: Threeves arose out of my own twisted imagination. I love to create my own mythos, especially when the classic ones don’t quite fit my literary needs. If you’re interested in reading more about threeves, I’m writing a blog post on the topic for Rainbow Gold Reviews. It will come out on November 4.

Q: Fantasy is obviously a favorite trope.  Have you always loved fantasy stories?

Q: When did your love of fantasy start?

AD: From the first time my mom read my sister and I a fairy tale at bedtime. Going to the drive-in to watch a Disney movie was my idea of pure heaven.

Q: Were you a prolific reader as a child and did you have a favorite story or book that has had a lasting impact on you as an adult and a writer?

AD: Oh, yes. I was that kid, the one with her nose always deeply buried in a book. I think my early outlook, as a story spinner and as a human being, was deeply influenced by the classic fairy tales; Hans Christian Anderson, The Brothers Grimm, The Arabian Nights, plus a rather scary big book of folk tales our German grandmother sent us. I think that book might have sent me down the path of dark fantasy.

Q: Fantasy or urban fantasy?  How do you define them?

AD: There’s no either/ or here for me. I love them both. Fantasy, what you might call classic fantasy, takes place in another world or an earth-like setting in a different time. Usually the author makes use of well-known mythical creatures like elves and fairies, but not always. Urban fantasy happens in the here and now, in worlds similar to this one but with magic. Urban fantasy tends to break the “rules” more often, which can be exciting.

Q: Do you have a favorite fantasy author you read?

AD: I tend to have favorite books rather than authors, but a big favorite is Neil Gaiman. Neverworld is one of my all time BBE’s (Best Book Ever). I also absolutely adored Jonathon Strange and Mr. Norrell by Susanna Clarke. New (to me) writers I’ve recently discovered and plan on stalking are Astrid Amara and Rhys Ford.

Q: Why fantasy?  Why does that resonate with you?

AD: Possibility. Potential. Power. As a kid I deeply believed in magic. As an adult, I strive to recreate that feeling of wonder in my stories. I love the idea of a vast mysterious power source that can save us or destroy us, depending on how we choose to use it.

Q: Favorite fantasy universe if you have one?

AD: Ursula LeGuin’s Earthsea. How can I not have mentioned Ursula under favorite authors? Tolkien’s Middle Earth, of course. A bit astray of the fantasy genre is Tom Robbins. He creates magic-tinged worlds I just don’t want to leave.

Q: Old school elf or new mythology elf?  Do you draw from one or both?

AD: Totally depends on the story. My tendency is to start with the with the classic model, then tweak accordingly.

Q: What’s next for Alexis Duran?

AD:I’m mere days away from finishing the next book in the Masters and Mages series, currently titled Blood of Salar. That’s Classic Fantasy. And then I have an Urban Fantasy called Dark Heart nearly completed that I hope my publisher will love as much as I do. My problem is too many ideas, never the opposite. I hope to finish several stories during NaNoWriMo.

Thank you, Alexis Duran, for the great interview and for definitely adding to my TBR pile! And I couldn’t agree with you more about Astrid Amara and Rhys Ford!

Alexis Duran was born and raised in the Pacific Northwest. At the University of Oregon, her fascination with people and relationships led her to major in Sociology, but her main love has always been creative writing. She’s worked in museums, fashion, finance and film production. Her favorite job so far was Administrative Assistant in a haunted Victorian Mansion. 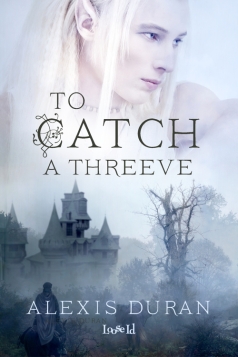 To Catch a Threeve Blurb:

Axel Blackwood catches a thief and is astounded to see that he closely resembles Liam Alloway, the love he lost seven years ago in an attack by the evil woodland folk known as threeves. Axel suspects he’s fallen prey to dark magic, but can’t help becoming infatuated with his prisoner. He’s overwhelmed with the hope that he can at last bring his lost lover home, despite everything that warns him it’s all a diabolical trick.   Bryn Darrow, the half-threeve, half human orphan sent to trick Axel and rob him of much more than a simple gem finds himself equally as fascinated with his handsome human captor and the lure of someplace to call home, but he knows deep down that the constable is in love with a dangerous illusion. When he’s commanded by the threeves to murder Axel and steal a witch’s powerful grimoire, he’s forced to decide between the only family he’s ever known and the one person who might rescue him from a life of isolation and pain.  Will Axel and Bryn be forced into a deadly confrontation before they can discover the truth?

To Catch a Threeve Excerpt:

“What are you, Bryn Darrow?” Axel asked.

“Wish I knew,” Bryn answered, shaking his head and chuckling. “You can go on pretending I’m this Liam person if you want.”

“If you ever try to act like Liam again, I’ll let Drummond lop your head off. He’s itching to, you know.”

“You started it,” Bryn snapped. “And now you’re getting friendly again.”

Axel jerked his hands away from Bryn’s back as if he’d been burned. “I’m looking for your clan sign. Why’d you remove it?”

“Looking with your fingers instead of your eyes? Don’t get me wrong. I don’t mind it.” Bryn looked over his shoulder with that annoying, delectable smile. Only the memory of being spelled senseless stopped Axel from resuming his exploration of Bryn’s skin, kissing his neck, pushing him down into the grass—

Contest:  Enter to win Rafflecopter Prize: $10 Loose ID gift card.  Must be 18 years of age or older to enter. Use the Rafflecopter link below for the entry and for all additional contest details.