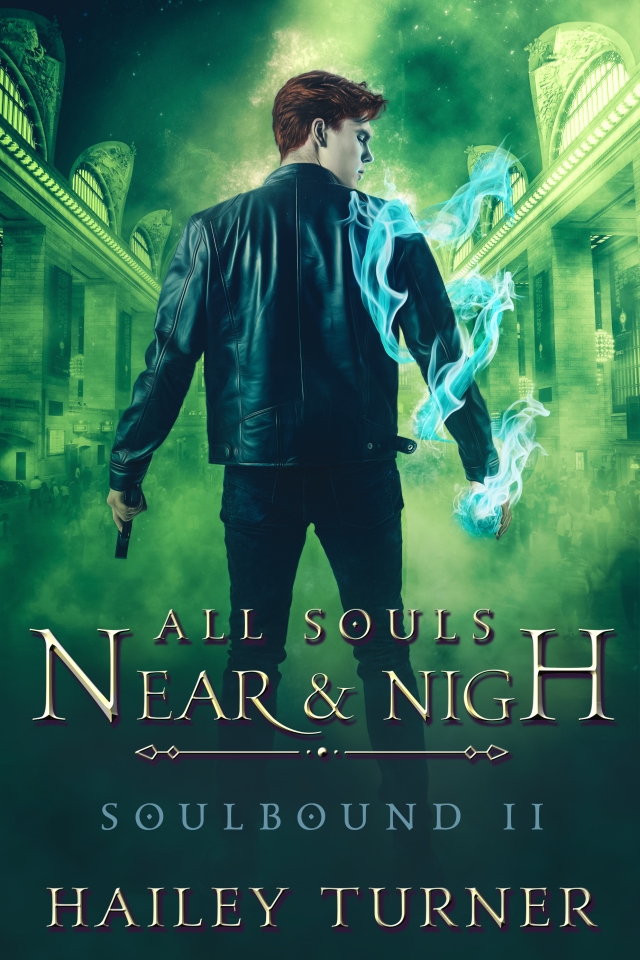 ALL SOULS is the rarest of creatures in the urban fantasy genre–a sequel that outshines the near perfect previous book. Astounding storytelling skill combined with layers of mythology, modern-day dangers, and the haunting sense this is all new yet frightening familiar, the Soulbound series by Hailey Turner is exceptional, addicting, and a new standard for the genre.

All Souls Near & Nigh by Hailey Turner

You can’t bargain with death if you’ve already sold your soul.

Special Agent Patrick Collins has been reassigned by the Supernatural Operations Agency to New York City. Learning to navigate his new relationship with Jonothon de Vere, the werewolf he’s now soulbound to, is nothing compared to dealing with territorial disputes between the vampires and werecreatures who call the five boroughs home. But the delicate treaties that have kept the preternatural world in check are fraying at the edges, and the fallout is spilling into the mundane world.

Manhattan’s club scene is overrun with the vampire drug known as shine and the subways have become a dumping ground for bodies. When the dead are revealed as missing werecreatures, Patrick and Jono find themselves entangled in pack politics twisted by vampire machinations.

Learning to trust each other comes with problems for both of them, and the gods with a stake in Patrick’s soul debt aren’t finished with him yet. Bound by promises they can’t break, Patrick and Jono must find a way to survive a threat that takes no prisoners and is stalking them relentlessly through the city streets.

Old and new betrayals are coming home to roost but the truth—buried in blood—is more poisonous than the lies being spun. Trying to outrun death is a nightmare—one Patrick may never wake up from.

All Souls Near & Nigh is a 104k word m/m urban fantasy with a gay romantic subplot and a HFN ending. It is a direct sequel to A Ferry of Bones & Gold, and reading the first book in the series would be helpful in enjoying this one. Please see the disclaimer in the Look Inside for content some readers may find triggering.

Author Hailey Turner says All Souls Nigh & Near is: An exciting sequel that builds on the series plot and will keep readers wanting more!

Jono braked for the amber light and leaned across the console to kiss Patrick. “Let’s keep that between us, yeah?”

“You know me,” Patrick muttered, chasing after Jono’s mouth when he tried to pull away. “I’m all about secrets.”

“Wish you weren’t,” Jono said, stealing one more kiss before the light turned green to shut him up.

Some things, Jono knew, you just had to live with.

“Everyone is where they should be except for Sage. Her mediation was today and it’s running late, but she’s with a senior partner of her firm. Estelle and Youssef won’t argue with the fae over her whereabouts.”

Jono snorted, ignoring the sounds of taxis honking to his left on Broadway. “Because they’d lose.”

Jono kept his eyes on Patrick, watching as the mage side-stepped a couple of posh-looking blokes as they continued down the street. “I’ll be fine. We both will.”

“Keep an eye on Patrick. Don’t let him do anything stupid.”

Emma laughed in his ear, but there was little humor in her voice. “Call me when it’s over.”

“You don’t have to leave because of me. You can stay here.”

“I don’t want you gone, I just want you back.” Jono smoothed his hand over Patrick’s messy ginger hair. “You’ve been lost in thought since the meeting in the park earlier today. This news article isn’t helping. I hate seeing you like this.”

Patrick sighed tiredly, the troubled look in his eyes something Jono wished he could wipe away. “I didn’t mean to drag you into this.”

“I’m back,” Patrick said in lieu of hello.

Casale opened the office door wider, gesturing for them to enter. “I wish you weren’t.”

“One of these days you’ll miss me.”

Patrick couldn’t help the bark of laughter that escaped his mouth. He respected Casale despite knowing the NYPD didn’t much care for when a federal agency came in to take over a case. But Casale would’ve been the one to reach out to the SOA asking for assistance in the first place. Henry had offered up Patrick out of the field office’s Rapid Response Division and Casale hadn’t said no.

Hailey Turner is big city girl who spoils her cats rotten and has a demanding day job that she loves, but not as much as she loves writing. She’s been writing since she was a young child and enjoys reading almost as much as creating a new story. Hailey loves stories with lots of action, gritty relationships, and an eventual HEA that satisfies the heart.

Newsletter:  You can keep up with Hailey’s future projects by joining her newsletter, where you can instantly download two free Metahuman Files short stories and the Soulbound short story Down A Twisted Path:  http://eepurl.com/cAEejL

Giveaway: Win 1 e-copy of any back catalog Hailey Turner book!