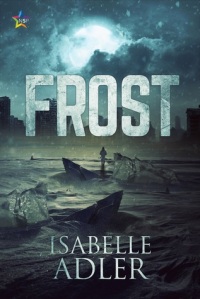 The end of the world as they knew it had come and gone, and the remnants of mankind struggle to survive in a barren landscape. Twenty-three-year-old Finn sets out on a desperate mission to scavenge for the much-needed medicine to help his sister. He knows better than to trust anyone, but when a total stranger saves him from a vicious gang, the unexpected act of kindness rekindles Finn’s lost faith in humanity.

The tentative friendship with his rescuer, Spencer, gradually turns into something more, and for the first time in years, Finn lets himself yearn for joy and hope in the dead of nuclear winter—right until Spencer goes missing.

They say love is the greatest power of all, but it seems it would take nothing short of a miracle to overcome the dangers that threaten to destroy Finn’s only chance for happiness and the lives of his loved ones.

This is the second book I’ve read by this author in the last month and it was another hit for me. (I also highly recommend her book Adrift).  I am a sucker for apocalypse settings in books and read them a lot.  This was the first time though that I have read a book when the apocalypse caused a constant snow and cold temperature.  I thought it was unique and since it would be mine own personal hell I was totally drawn in to it.
The book was relatively short but still did a good job with the world building.  It set a tone of bleakness and fear and I could immediately understand Finn’s desperation to help his sister.  Spencer was intriguing and I liked him immediately.  The bad guys were well done too.  You have to have bad guys in apocalypse stories but if it’s too heavy handed it can be over the top.  This was just the right mix in my opinion.
I really liked the romance and I thought the guys were great together.  It was a bit insta-love and while I don’t generally like that, I will always give that a pass in this sub genre.  It’s the end of the world….. you gotta get your loving when and where you can.
As I previously stated I have read two of this author’s books this month and have really enjoyed them both.  She was a new to me author and I’m really excited to have found her stuff.  I will definitely be reading more by her.
Cover:  This cover was done by Natasha Snow and I just love it. I think it’s really well done and sets the feel of the story perfectly.  I think this cover artist and publisher have the best covers in the genre right now.  They set a high bar for book covers.
Sales Links:  NineStar Press | Amazon
Book Details:
ebook
Published March 4th 2019 by NineStar Press
ISBN 139781950412143
Edition Language English