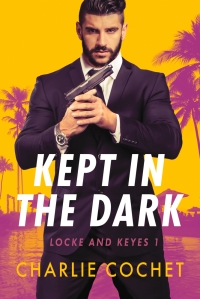 Now Caiden is riding a desk at Langley after his cover is blown. And Álvaro—who was “killed”—has a new identity and purpose as Delta/D, an operative for the Locke and Keyes Agency, under the leadership of the mysterious Alpha Orion.

When D and Caiden team up in a deadly black ops mission, the urge to kill each other will have to take a back seat to the desire for revenge against the man who betrayed them both. Surviving the mission won’t be easy. Resisting the passion between them—that might be impossible.

This was a really good story and I really enjoyed it.  D has been working on a black-ops team since he was “killed” and his world gets thrown sideways when Caiden walks into their meeting.  Caiden’s life was destroyed two years ago and he’s barely been living since and isn’t quite happy to see the man he spent one night with when they meet again.

Both of these guys have secrets, for different reasons but open up more than they ever though they would.  I loved the interplay between these two and hated seeing D feel that he had to push Caiden away for him to be happy because he didn’t think he was worthy.  For a grumpy contract killer D is surprisingly sweet and he did a good job of taking care of and protecting Caiden even without really meaning to.  Caiden longs to really be with D but he is willing to play the long game and wait, though one moment in their mission pushes him a little too far.

I was glad that D and Caiden both got some closure over what happened in Vienna but it looks like there is more to come as the agency digs deeper into their betrayer.  I loved the other guys we got to meet from the Locke and Keyes Agency and really look forward to their stories.

The cover art by Tiferet Design is great and I love the visual of D.