Out of the Shade by S.A. McAuley

Jesse Solomona has always tried to be the perfect straight guy—a cocky sports fan who drinks more than he did in his fraternity days and an expert at one-night-stands. That he hooks up with just as many men as he does women is a secret Jesse’s been hiding for years, fearful of losing his family and tight group of friends. He’s a Kensington boy—a group of guys that grew up in the same neighborhood and somehow all ended up back in their hometown. They, and his family, are the only things that still matter in his otherwise soul-sucking life.

Chuck Dunn, a tattooed and pierced sports photographer, has refused to step back into the closet since he was disowned by his family, but he keeps choosing men who can’t fully be with him. Finally free from a long-term relationship he should’ve ended years ago, he quits his high-profile gig in favor of getting back to the art of sports photography—documenting a local boxing club that works with at-risk teenagers. He may not have the same swagger anymore, but he’s working to be happy with who he is.

When Chuck joins one of the Kensington boys’ community center sports leagues, Jesse’s self-imposed rules are systematically demolished. But there’s one barrier Jesse can’t find the strength to break through—coming out to the other Kensington boys. Chuck knows hooking up with Jesse is a bad idea. Falling for him even worse. But he can’t stay away.

Chuck is damaged by his past. Jesse is frightened about his future. But, together, they may just be able to come out of the shade.

All-Stars was a dive. A worn-down shack on the literal wrong side of the tracks on the south side of James Bay. There wasn’t even a bouncer at the front door.

“This is my kind of place,” Jesse said as they walked into the bar. “Feeling those normal guy vibes.”

Tayshaun waved to them from a table at the other side of the packed room and Chuck acknowledged him before turning back to Jesse. “I’ll grab us a couple beers. Why don’t you go over and say hi.”

Jesse took a step, then hesitated.

Chuck raised an eyebrow as he surveyed one of the biggest, most physically intimidating men he’d ever met freaked over making conversation. “Just normal guys, Jesse, I promise.”

“The Bay’s quarterback is sitting at the table next to him.”

“Okay, so he’s kind of a dick. But you know all about dealing with those because of the Kensington boys.”

Jesse smirked. “Fuck you. Hurry up.”

Despite Jesse’s urging, Chuck took his time at the bar so Tayshaun and Jesse had a chance to talk. He chatted with a couple other Bay’s players who were seated there and by the time he made his way over to Jesse, Jesse was guffawing over something Tayshaun had said. Chuck slipped Jesse’s glass in front of him and took the seat next to him.

“We making friends here then?” he said.

“No surprise there.” Chuck took a deep swig of his drink, the local craft beer rolling down his throat in a pleasant rush. “Did Jesse tell you he used to play in college?”

“Yeah, we were comparing notes on treatment for janky knees.” Tayshaun sat back and gestured between the two of them. “So how long you been together?”

Chuck froze just as Jesse’s eyebrows shot up and he gripped his glass with white knuckles, stammering, “We’re— Uh— We—”

Tayshaun thumped his beer against the table and winced. “Shit. I’m sorry. I assumed— And I— Shit. I should know damn well better, of all people.”

That brought stony silence to the table, but Chuck held his ground, waiting for Jesse to put the pieces together. While he hadn’t expected the topic to come up quite this way, he’d hoped Tayshaun would feel comfortable enough with Jesse to open up. Because Tayshaun was a regular guy, and….

Tayshaun nodded. “My team knows, and so do the coaches. It’s an open secret as they call it. I don’t know if I’m ready to be the first out player in the league. Shitload of pressure.”

Chuck shrugged. “You’re a franchise player. It may be easier for you than others.”

“I ever decide to do it, then you’ll be the first I call. You’ll make my ass look like the masterpiece it is.”

“I’ll grab us another round.” Jesse excused himself and headed for the bar.

Chuck glanced at Jesse over his shoulder. He hadn’t outright denied anything between them, but he hadn’t confirmed it either. And even though he’d left the table, he wasn’t running for the door. How fucked up was it that Chuck considered avoiding a panicked exodus a win?

It was also much too familiar.

“Sorry about that,” Tayshaun said.

All around that could’ve gone better, but he hadn’t been able to figure out how to broach the subject with betraying either Tayshaun’s or Jesse’s trust.

Chuck waved off the apology. He’d find a way to talk to Jesse about it later. “Your season’s going well.”

“Football is my life.”

“We burned hot and sputtered the fuck out. Couldn’t find any time once he got traded. How about you?” Tayshaun tipped his head up. “You seeing anyone?”

Chuck downed the rest of his beer. “Yeah. And it’s—”

“Me,” Jesse finished for him, setting the beers down.

Jesse plopped into his chair, his gaze locked to Tayshaun’s. “We just met about six weeks ago, but I can’t seem to shake him. He keeps showing up in my bed.”

A distinct crimson stained Jesse’s cheeks and half of his beer had been drained even though he’d only been gone for minutes. Chuck grounded himself in those details as he stared disbelieving at Jesse.

“Chuckie’s tenacious,” Tayshaun said. “Like a dog with a bone.”

“Tell me about it,” Jesse responded. “Tenacious and loyal—even when I asked him to keep us quiet.”

Chuck’s head spun. With Tayshaun across the table there was little he could say to acknowledge what had just happened, but he couldn’t let the moment pass unrecognized either.

He didn’t have to scramble for the words though, because Tayshaun was already leaning across the table. “Aw hell. You’re not out either, then?”

“Well”—Tayshaun grinned—“then I guess we have more to talk about than knees.”

Then Jesse set his hand on Chuck’s thigh and squeezed.

Chuck felt the echoes of that touch for the rest of the night. He nursed the beer Jesse had bought for him until the contents were flat and warm, then stuck with water after that—wanting to remember every second of unguarded conversation. Every rumbling laugh Tayshaun elicited from Jesse. Every knowing glance Jesse sent his way.

When the lights flipped on to full power at the end of the night, Chuck embraced Tayshaun and promised to come see him again, and Tayshaun embraced Jesse with just as much warmth, extracting the same promise from him.

Chuck was sober and yet punch drunk.

He started up his truck and stared out the windshield, unsure what to say now that he and Jesse were alone.

But it was Jesse who finally broke the silence. “You and Tayshaun…? He isn’t the pro you were with, right?”

“No. He’s like my little brother,” Chuck said, watching Jesse’s shoulders relax with that answer. “If you really want to talk about exes right now I will, but Jesse— What you did in there…?”

Jesse shrugged. “After how cool Emily was, and spending this weekend with you…. I didn’t want to deny it, and Tayshaun felt safe.”

“All good things start with one step, right?” Jesse smiled shyly. “Or something like that.”

“Yeah, something like that,” Chuck repeated. He set his hand on Jesse’s nape and ran his fingers over the back of Jesse’s head. Jesse arched into the touch, his eyes slipping closed. As emotionally shocking as tonight had been for Chuck, it had to have been taxing for Jesse. “What do you want to do? Grab a hotel or drive?”

“Let’s see how far we can drive,” Jesse mumbled around a yawn. “I really do need to get back to work on Tuesday and I’d rather not be exhausted when I go back.”

“Britney it is, then,” Chuck said, letting go of Jesse and turning on his playlist.

Jesse chuckled lowly and reached for Chuck’s hand as they pulled out of the parking lot. He entwined their fingers and rested his head against the window, snoring softly before they even hit the freeway.

Chuck hummed under his breath. The energy from Britney and the warm, powerful hand in his was enough to keep him going well through the night.

Author S.A. McAuley is a wandering LGBTQ author who sleeps little and reads a lot. Happiest in a foreign country. Twitchy when not mentally in motion. Her name is Sam, not Sammy, definitely not Samantha. She’s a dark/cynical/jaded person, but hides that darkness well behind her obsession(s) with shiny objects. 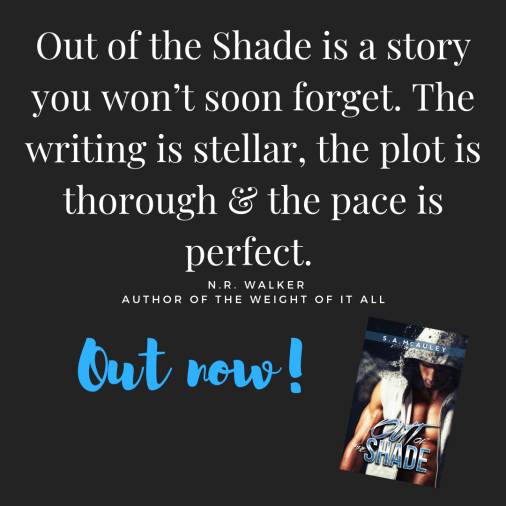 Giveaway: Celebrate the release of OUT OF THE SHADE with author S.A. McAuley by entering this giveaway for a chance to win 1 of 3 $10 Amazon Gift Cards!