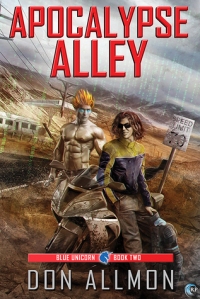 Home from a six-month assignment to war-torn East Asia, genetically engineered supersoldier Noah “Comet” Wu just wants to kick back, share a beer, and talk shit with his best friend, JT. But JT’s home has been shot up like a war zoars out of 5ne, and his friend has gone missing.

Comet’s only lead is a smart-mouthed criminal he finds amid the mess. His name’s Buzz Howdy. He’s a con man and a hacker and deserves to be in jail. Or in handcuffs, at least. The only thing the two have in common is JT. Unless you count the steamy glances they’re sneaking at one another. They have those in common too. But that just makes Comet all the more wary.

Despite their mutual distrust, they’ll have to work together to rescue JT before a cyborg assassin gets to him first. Racing down a miserable stretch of road called Apocalypse Alley, they must dodge radioactive spiders, a lonely cannibal, and a killer Buick. They also try to dodge each other. That last bit doesn’t work out so well.

When I last put down  The Glamour Thieves (Blue Unicorn #1), the first story in this amazing series, JT, Austin, and his elf lover were headed to his  home that he shares with the teenage orc he’s mentoring having stirred up more trouble and uncovered even more disturbing information after freeing the virtual intelligence known as the Blue Unicorn.  Trust me, you need to read that story.  One, it’s a dynamite adventure tale and two, without it, you will be lost diving into this one.

I love Apocalypse Alley but the truth is you won’t get a solid foundation of the world or overall series ARC without reading The Glamour Thieves first.  This story and series builds upon each other like building blocks and you can’t enter midway point.  It’s like being dropped on a warped yellow brick road and not knowing you’re headed to Oz.  Not that you’re all that sure of your destination here.  So many twists  and turns await you!

And it all happens at break-neck speed.  What an adrenaline rush.  I had to read it twice to gather together all the story threads and hints I missed the first time.  Props btw to Allmon for creating a character with the name of Urushiol.  As a park naturalist/Ranger, I’m highly familiar with this chemical compound as is anyone who’s come in contact with poison ivy.  I laughed myself silly when I saw that name.  Perfect in every way.  Anyhow, from the moment the story opens we start picking up speed as Comet returns expecting to find JT waiting to pick him up at the airport and  goes looking for him when he doesn’t show.  Each scene as Comet interacts with both Buzz Howdy (we’ve met him before) and others foe and friend gives the readers more information about the man.

Buzz is a known entity but we get into his head and yes heart here.  He falls for  Comet, quick yes, but you can see how and why it happens.

But mostly it’s a race.  A race to keep ahead of some of the worse villains out there, a race to find JT and crew, a race to stay alive…all in heart pounding, white knuckle…go all out scenes.  It’s wildly imaginative, horrifying, and incredibly suspenseful.  Did I say I loved it?  And just when you think it’s safe…a surprising twist shows up at the end that makes you want to go back and read books one and two again to see if there was anyway you could have seen this coming.  And now I need The Burning Magus (Blue Unicorn #3 to come out in the worst possible way.

So, yes, I  absolutely recommend this series.  It’s one wild  ride.  It has great characters, it’s gritty, suspenseful, full of twists and turns and more plots threads then you can shake a VR stick with.  It’s even got love such as it is.  But you need to start with The Glamour Thieves and then to Apocalypse Alley.  I’ll be waiting for you at The Burning Magus!

Cover by: Simoné. I love these covers.  Perfect in everyway from the tone and characters.