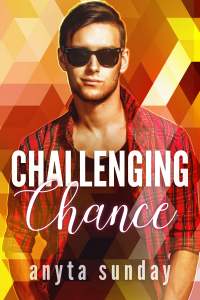 In this third installment of the Love Letters series, I was thoroughly prepared to hate Chance, and not give him a chance, so to speak.  He was so dreadful to Landon in book 2, Begging Ben, that I just couldn’t see a way that he could be redeemed.  I underestimated Ms Sunday because by the end of this book I loved him.

Chance is a poor little rich boy who is surrounded by hangers-on who just want him to foot the bill for everything, a father who has never been proud of him, a perfect brother who can do no wrong, and people who are willing to sell him out for cash.  He has never been able to come out as bisexual because he knows that will be one more nail on the coffin in his father’s regard.

The book starts with an epic fail on the part of Chance, who brings a completely inappropriate date, Bunny Sparkelz, to his brother’s engagement party.  The unfortunate date is not only highly criticized by Chance’s father but also manages to sink Chance’s Lamborghini into the pool.   Not only that but he finds out that his personal assistant has been paid to spill all the dirt on Chance to his father. Well, then, can only go up from there, right?

Chance is a basketball player who’s teammates all take advantage of him and use him. He’s really only had one friend in his life, Landon, and he slept with him over the course of a week and then tossed him out,  so that relationship is over. “Landon might have his life together but he didn’t want Chance anywhere near it just in case he messed it up again.  Another relationship he’d screwed up …”   Dad threatens to cut Chance off and insists Chance plan his brother’s rehearsal dinner.

I was already feeling sympathy for Chance by this time because he really does want to be a better person and he just wants his father to be proud of him but “No matter how closely Chance followed in Danny’s footsteps, he always pissed his dad off rather than amused him.”  Funny enough, Danny is the younger son.  Usually it is the other way around.  Chance is trying and getting nowhere.  “He needed to mature. Not only for the money –he had no skills to afford his lifestyle on his own- but for one look of pride from his dad.”

Since Chance has fired his PA for spilling to dad, he ends up hiring (sort of against his will) Brook.  Brook has to convince Chance to hire him, mainly because Chance is worried what he will do when faced with a handsome man day in and day out.  Can’t be bi, remember, or dad will be upset.  “Brook reminded him of his ex-friend Landon – and the one week Chance had given in to what his body craved.”

Brook knows something about mistakes and wanting to be a better person.  He’s made his share of them, some big, and he’s trying to make up for them.  He has a secret but he needs this job and he will work hard to make it happen. And he does.  He is so good for Chance, seeing through the “friends” who step all over Chance and he sees the Chance that is inside.  Brook tries to do what is good for Chance.  Chance is a vegetarian and Brook’s first effort at cooking for him ends up a disgusting soupy mash, Chance still realizes it was the effort that the kindest thing.  “It’s been so long since he appreciated how hard others died.  When Landon had been there for him, he’d taken it for granted.  He scooped up the mash and brought it to his lips.”  He’s growing, our boy.

He broke my heart, Chance did, and I was cheering on Brook to help.  “Brook had walked in on Chance in bed, tossing a ball towards the ceiling. Up and down, the telltale sounds of a wheezed sob.”  I admit, I was super ticked at dad, expecting the worst always and in one case, moving out the mansion to a bigger one and only taking Danny with him, leaving Chance to his money and lonely huge house.

Chance does everything he can to not give in to what he feels for Brook.  He keeps him a secret and fights everything he feels. He hurts Brook multiple times.  “Brook’s shoulders dropped as he lurched for the door.  Chance hated that he was disappointing another person in his life.”  But it takes time to grow as a person, to realize that you are worthy of being happy and living your own life.  Chance is working on it and Brook helps. I loved getting to see it.

The ending is sweet and perfect, just what I would have wished for these two.

Cover art by Natasha Snow continues the pattern of the others in the series, a colorful background (this one in shades of orange) with the MC on the front, in this case Chance, looking cocky.