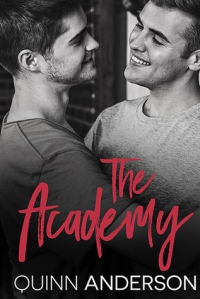 Sebastian, Theo and Dante are friends at a small private college. Sebastian is a notorious player, screw them and leave them.  When Nick starts at the college, grieving for his father and coming from a large city college, they resurrect an immature ploy from their younger days.  The first one to get Nick to kiss them wins Barbzilla, the trophy.  The caveat is, Nick has to be the one to initiate the kiss.  So they go after Nick, particularly Sebastian.  He is unrelenting in the face of Nick’s obvious distrust.

That is, I believe, what kept this from being a higher rating for me. To be honest, I liked Theo and Dante (secondary characters, friends of Sebastian’s) a little more than I liked Nick and Sebastian.  Theo and Dante were friends working on their relationship.  Nick and Sebastian spent most of the book snarking and being rude.  While I usually have no problem with the idea of “the bet”, having read this trope before, I didn’t like the way it was handled here.  You know at some point the bet will be revealed and it will cause problems but Sebastian’s actions were just so over the top nasty I couldn’t handle it.  The fact that Theo’s action, and true friendship towards Nick, made me believe Theo was the better choice wasn’t a good direction for a romance.  That being said, I thoroughly enjoyed Theo and Dante! They have their heads on straight and try to guide Sebastian.  “For Sebby.”

Speaking of the secondary characters, I also loved Deen, Nick’s roommate.  “Deen didn’t ask him what’d happened again.  He didn’t say anything else.  He just hugged Nick and didn’t let go until Nick had finished crying.  Then he hugged him some more.”  Plus, he’s funny even though “Deen beamed, like he wasn’t used to people laughing at his jokes.”  Considering his name is Deenabandhu I did snort when he asked, “It is Nickolas, right?  And not like, Nickstopher or something?”  He’s sweet  Really, that’s the friend I want.  Sweet and funny.

The writing was very good in this book, although parts of it dragged.  Perhaps because it was long at 366 pages there were portions that just seemed to go on and on.  I got a little tired of the back and forth between Nick and Sebastian, because I didn’t feel the connection there.  The fact that it’s really just a matter of weeks could have something to do with it as well.

Overall, the book was okay but not something I’d read again.

The cover art by Garrett Leigh was a little bit misleading for me because it shows two smiling, incredibly happy looking men holding each other.  The book itself didn’t have that fluffy feel to it.

After Harley and his roommate, Ryan, have a chance meeting with the two hot guys, Devon Marx and Tasha Novokov, rooming next to them, Harley thinks he knows which of them is his nightly “companion”. But that guy, Devon, asks Ryan out instead of Harley, and Harley is heartbroken believing that Ryan has been mistaken for him. The other roommate, Tasha,  is dark, handsome, straight and seems intent on befriending Harley.  What’s a gay boy to do when everyone he is attracted to is not attracted to him?

This is a short story whose main attraction is the prickly little porcupine known as Harley Santos.  I found his character to be snarky, pissy, and quite adorable. And totally not deserving of the predictable plot he has found himself in.  Harley comes from a large close knit Portuguese family in a small town in Maryland.  He’s tortured himself with scary images of the dark side of city life and the what if’s of college gone bad.  He’s slight in stature, slender in physique so I can see his behavior as a shield he erects against slights and injury, real or perceived. So does it seem realistic that he falls “in love” with the guy next door just because they are masturbating together?  It doesn’t to me.  Lust yes, love to the point of his heart breaking when Devon picks his roommate? Ummm, no.

Harley then transfers his affections to Tasha while maintaining that he loves Devon who loves Ryan who is understandably confused about the whole thing because no one is talking to each other. Got that? Instead letting Harley get his snark on, Erica Pike turns him into avoidance guy, and then has him sobbing his heart out so traumatized that he is stuttering again (we didn’t know he stuttered to begin with).  To use the current lingo, Harley so doesn’t deserve this.

By the end of The Walls Have Ears, I was beginning to wish that This Reader Didn’t Have Eyes because the ending had me blinking in disbelief.  Erica Pike can write realistic characters AND put them into realistic situations, at the same time.  Just don’t look for it here. 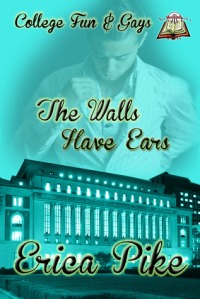 Cover.  Cover Artist Dakota Trace. I just don’t care for the cover for the series .  Different color, different model on the top, same bad graphic on the bottom.