Darcy works for Boyfriends for Hire and his newest assignment is to play the role of boyfriend to a wealthy socialite who happens to be a scientist with no time for men. He never expected the intense attraction to his date’s brother, Adrian.

Adrian has been as unlucky in love as his sister, but he doesn’t approve of hiring a boyfriend, whatever the reason. Until he meets Darcy. Then he comes to realize that love can happen in the most unexpected of ways.

This story had a nice premise and I really liked Darcy’s character. He was everything a mother would want in a boyfriend for her daughter or son. Honest, a veteran, polite, handsome, and well-spoken with a calm demeanor. Unfortunately, though he’s hired to be Abby’s boyfriend, his heart is grabbed by her brother, Adrian.

To be honest, this story progressed as you’d expect this trope to go. It was very light and fluffy. The guys were honest enough to hold off until the boyfriend contract ended before they hit the sack, and they ended with a HEA and everyone happy, including Abby and the guy she really wanted and her parents who now see that both their children are settled.

If you are looking for light reading, this should satisfy your sweet tooth.

Cover by Meredith Russell depicts two men holding hands, dancing against a backdrop of a wedding. The washed out and faded look of the cover isn’t very appealing. 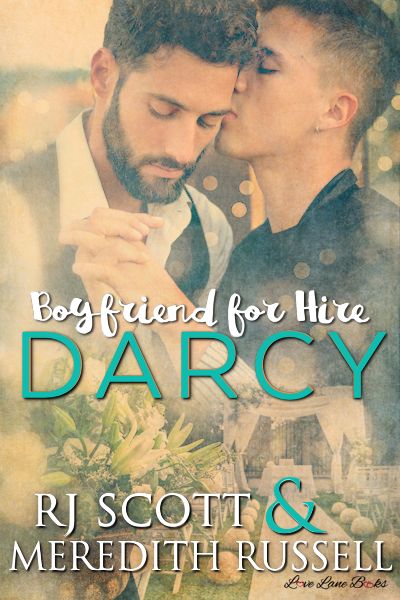 Darcy’s newest assignment is to play the role of boyfriend to a wealthy socialite, but never expected the intense attraction to his date’s brother. Falling for Adrian is dangerous and certainly not part of the plan.

Adrian has been as unlucky in love as his sister, but he doesn’t approve of hiring a boyfriend, whatever the reason. Until he meets Darcy. Then he comes to realize that love can happen in the most unexpected of ways.

One week. That is all the two men needed to fall in lust, but will they have a lifetime to fall in love?

RJ’s goal is to write stories with a heart of romance, a troubled road to reach happiness, and most importantly, that hint of a happily ever after.

RJ is the author of the over one hundred novels and discovered romance in books at a very young age. She realized that if there wasn’t romance on the page, she could create it in her head, and is a lifelong writer.

She lives and works out of her home in the beautiful English countryside, spends her spare time reading, watching films, and enjoying time with her family.

The last time she had a week’s break from writing she didn’t like it one little bit and has yet to meet a bottle of wine she couldn’t defeat.

She’s always thrilled to hear from readers, bloggers and other writers. Please contact via the following links below:

Meredith Russell lives in the heart of England. An avid fan of many story genres, she enjoys nothing less than a happy ending. She believes in heroes and romance and strives to reflect this in her writing. Sharing her imagination and passion for stories and characters is a dream Meredith is excited to turn into reality.