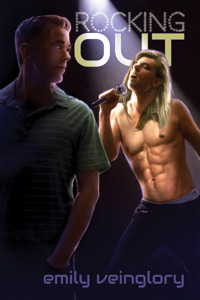 It all started back in high school.  Scott DeMaris and Bevin Stewart formed a band  called Black Lam. Scott supplied the music and the motivation and Bevis wrote the lyrics and sang.  Black Lam played locally with moderate success and everything was fine until Scott decided he wanted to be famous and the band was the ticket.  Scott and Bevin were also high school lovers but being gay in a world of screaming girls fans was not going to cut it for Scott who went back into the closet. Bevin, dealing with the onset of a number of crippling disorders, told Scott he didn’t want to be famous and left both Scott and Black Lam.  And the men parted not to be reunited for another 10 years.

Now Scott has returned and Bevin’s carefully ordered life he has assembled for himself is upended, his strict routine shattered.  Scott wants Bevin to be his friend again.  He is tired of the hangers on and the phonies surrounding him and wants Bevin back.  Bevin likes his life. He owns a cafe shop and a small house. A strict regimen and regular visits with his therapist have helped to keep his agoraphobia and panic attacks under control, among other issues. And Scott back in his life puts all that at risk.  Added to everything else, a closeted Scott wants to renew their relationship and that is something that an out gay Bevin won’t tolerate.  He won’t be someone’s secret and being the hidden lover of a rock star is more than he can handle.  But Scott won’t give up and Bevin realizes that his love for Scott is still there after all these years.  How can two men makes their relationship work when love is not enough to keep them together.

In Rocking On Emily Veinglory has surely given us one of the more complex, damaged main characters that I have come across in Bevin Stewart. When we first meet Bevin sitting at his computer trying to decide if he wants to “friend” Scott on Facebook or not but is interrupted by a sound from the back of the house.  He is trying to navigate through the rooms of his small house with difficulty.  There seems to be clutter everywhere, items stacked on every possible surface of the house he lives in.  And someone, Scott, is tapping on the backdoor wanting to come in.  But napkins, and other restaurant goods are stacked against the walls and door and the only way in is through the front entrance.  Just from this scene alone we are aware that Bevin has some issues, big ones.  And as the story gains momentum, more and more of Bevin’s problems come forward.  Bevin  is an agoraphobic given to panic attacks, and he also seems to have hoarding tendencies to go along with the fears of crowds and tight places.  Yet, he has acknowledged his  problems and sought help with the assistance of a therapist he listens to.  Bevin has also managed to own and run a successful small business and accumulate employees that respect him and in some cases are his friends.  I liked Bevin immensely and wish the rest of the book and his lover were up to his high standards.

Part of my quibbles with this story come from Scott DeMaris, closeted rocker who wants Bevin back in his life but on his terms.  He plows back into Bevis’ life with all the subtly of a runaway train and with just about the same effect as he starts to demolish Bevin’s carefully planned life.  I think we are supposed to root for him as means to shake Bevin up and enlarge his world but instead I ended up more irritated than anything else. Scott reappears, shakes things up and then vanishes on tour without a note or phone call before appearing on Bevin’s doorstep yet again.  Absent and feckless are two of the words Bevin uses to describe Scott.  I can think of so many more and none of them flattering.  Scott declares his love for Bevin but I never feel the truth of that statement.  At one point the psychiatrist working with Bevin, tells him that Scott’s very unreliability maybe just the thing Bevin needs otherwise Bevin would rely too much on a lover who is constantly around and I am stunned by that.  So if I get this right, better to have a so called lover you see intermittently than work on your issues of dependance? Gack.  Most of the problems I have with Scott is that he seems to have no layering to him and he comes across as more of a one-dimensional character than Bevin does.  The two men just do not balance each other out and that inequality effects the entire story.

There are several events within the story that are traumatic for Bevin and they come across so realistically that your heart beats fast and your stress levels rise along with Bevin.  I wish that the drama and strength of these episodes would have been used to better effect within the narrative.  At the end of the seeming endless chain of one night’s events that include abandonment on the side of the road and car accidents, I would anticipated them being used as a springboard to an epiphany or life change or something other than a medium regression to past behavior.  Over and over again, I feel as though Bevin and the reader are being set up for something major and than nothing happens.  Perhaps that is more realism in the way this story actually unfolds than this book can handle.  What I do know is that the ending leaves me unsatisfied and feeling unsettled.  I am not happy for Bevin in the end and he is such a great character that I should be as content as he purports to be as he goes off with Scott.  I’m not and I don’t think you would be either.  In fact, I would be scrambling to find the number for Match.com to hand to Bevin before he boards the plane.  Bevin deserves much better and so do you.

Cover by Paul Richmond is dramatic and wonderful.  Not a match for the book however.

Well, as everyone knows by now, the Cards rallied and the Nats lost.  But oh what a season they gave us!  The Nationals had an outstanding year, giving the city something we haven’t seen in close to a century, a winning baseball team in DC.  We have Davey Johnson, Stephen Strasburg, Bryce Harper, Jason Wurth, Gio Gonzales, Ryan Zimmerman and all the others to thank for all the glorious play, the unbelievable pitches, the outstanding hits and the high drama of the outfield.  It was great!  And now we have all winter to dream of the return of the Boys of Summer.  Great job and thanks for the wonderful memories!

The weather seems more like November than mid October these days with our first frost occurring on Friday.  A portent of a hard winter to come? Perhaps.  We didn’t actually have a winter last year but I just hope Mother Nature doesn’t feel the need to make up for that and give us the snow and ice for two winters.  At any rate, the plants are getting  mulched and the gardens prepared, just in case.  The generator is in, new roof on and gutters as well.  I hope we are prepared but you never know until it comes.  At least I have lots of books to read and pumpkin spice coffee to drink.  Sigh.

Here is the week ahead in book reviews: