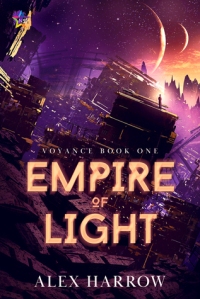 Damian Nettoyer is the Empire’s go-to gun. He kills whoever they want him to kill. In exchange, he and his rag-tag gang of crooks get to live, and Damian’s psychokinetic partner and lover, Aris, isn’t issued a one-way ticket to an Empire-sanctioned lobotomy.

To protect his friends and save his own skin, Damian teams up with Raeyn to make his revolution work. As the revolution gains traction, Damian gets way too close to Raeyn, torn between the need to shoot him one moment and kiss him the next. But Aris slips further away from Damian, and as Aris’ control over his powers crumbles, the Watch catches on.

With the Empire, Damian had two policies: shoot first and don’t ask questions. But to save the guy he loves, he’ll set the world on fire.

Buckle up and hold on tight, you’re in for one hell of a wild ride with “Empire of Light”. And don’t forget the hard hats and bullet proof vests! Oh, and do take a look at the trigger warnings on the publisher’s website, there’s a lot of violence and other stuff going on.

Usually it’s a bad sign when a book makes me wince. That means the writing is so bad, it physically hurts. But here I was wincing in sympathy with poor Damian, who’s constantly getting beaten up or shot. Not that he’s an innocent victim, he doles out his fair share of violence as well. Now, I’ve never been beaten up or shot, but the author did such a brilliant job at describing it all, I could almost feel the pain.

The plot is full of action and leaves you kind of breathless. There’s always something happening and our heroes never get to really catch their breath. This makes for an extremely addicting read. I had to force myself to put the book down and get some sleep.

The setting is quite dark, very much a dystopia for adults, with plenty of blood, sweat and tears. And some sex, but no romance in the traditional sense. Honestly, the romance kind of broke my heart.

But despite the action packed plot, there was a lot of feeling as well. It really affected me and I had to swallow back tears once or twice. And I really rooted for the three MCs. They probably don’t qualify as nice guys and they did some pretty bad stuff, but it made sense in the context.

I enjoyed the world building, I think it was really well done and made a lot of sense.

Honestly, I loved everything about this book. And the best part: This is the start of a new series, so there’s more to come! The ending definitely left potential for more, but there’s no cliffhanger. I still can’t wait for book two.

The cover by Natasha Snow is aesthetically very pleasing, but I’m not sure it quite fits the story. I’d expect a space opera, not a dystopia set in a futuristic New York.