Can missing a fatal flight be the wake up call Harrison needs? 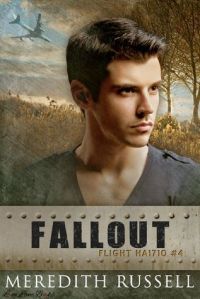 When Harrison Kelley is banned from getting on Flight HA1710, it seems to be the perfect ending to a crappy couple of days. Not only did he wreck a wedding, but he’s drunk way too much and been on the receiving end of the groom’s brother’s fists. Being escorted out of the airport by security was just the icing on the wedding cake.

Elijah Pettifer has lusted after Harrison from afar for years but Harrison never sees him as anything more than a friend. If he ever saw him at all. While attempting to defend what little honor Harrison has left, Elijah gets caught up in the wave of chaos surrounding his teenage crush. But missing his flight home because of Harrison’s mess might just be the luckiest thing to ever happen to him.

With a 24 hour ban imposed by the airport, and having only each other for company, the two men grow closer. But will the fate of the airplane they should have been on be the push Harrison needs to walk away from the toxic relationship of his past? And can Elijah make Harrison see exactly what he’s been missing out on because of it?

The saga of doomed Flight HA1710 continues with Fallout by Meredith Russell.  This time the crash and aftermath affects not the passengers or crew but two people who missed the flight.  Harrison Kelley’s closeted boyfriend of many, many years is getting married, only not to Harrison but to an unsuspecting woman.  Harrison is but one of the wedding party at a destination wedding attended by many of a close set of friends.  One of those friends is Elijah Pettifer, is  crazy about Harrison, has been since their school  days but Elijah has always been overlooked because of Harrison’s passion for Anthony,  your basic self centered user.

Now all gather to celebrate Anthony’s wedding and the situation combusts when Anthony not only expresses his intention of continuing their “secret” affair after the wedding but is caught by Harrison with another man.  Talk about an unhealthy relationship.

And that’s part of my issue with this story.   So much of it is Harrison acting like a jerk, weeping over his long term affair with the closeted Anthony, who is as self serving as he is  emotionally cold.  Harrison, of course, gets drunk and acts out, and behaves generally like a “lover scorned” instead of the adult he is supposed to be.  Harrison’s connection to Anthony is almost one of obsession, one that’s a little masochistic at that.  If, as a reader, you connect to Harrison’s misplaced (and years long) passion for Anthony and sympathize with him, then you will like this story.  If, like me, you found yourself growing tired of his whining and actions, then you will find yourself getting impatient with the characters and the storyline.

Elijah is a caring person, a man who lusts after Harrison because of a drunken kiss in their youth. Yes, there is a pattern of alcohol abuse (Harrison’s) that is not directly addressed here and I think it should have been given its many mentions in the plot.  It takes most of the story before Harrison is able to see him as a person and treats him accordingly.  And yes, it often felt as though Elijah had a doormat in place of a spine.

What saves this book for me is the lack of instant love and a relationship. This is definitely a “promise” of more, instead of an actual romance.  The aftermath of the crash and the emotional impact is handled believably.  The character of Harrison feels realistic too, he’s just not someone I connected with.  For me, it was a nice story in a collection of novels I’m enjoying but not an especially memorable one.

Cover art by Meredith Russell.  Wonderful covers for this series, great for branding and for the characters in each story.

When Flight HA1710 crashes killing seven people the after effects are too many to think on. But how does the crash change people’s lives? From the pilot to the guy who missed the plane we chart the stories of those whose lives were impacted by the crash.