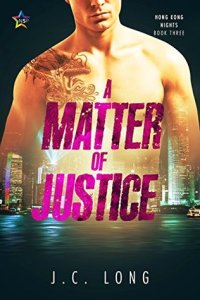 The battle between the Dragons of the Eastern District and their bitter rivals, the Twisted Vipers, is reaching a dangerous point. The Anti-Gang Task Force is hard at work trying to bring down the Vipers. Tensions ratchet when Johnny Hwang guns down a prominent inspector on the task force, and Conroy Wong, Wei Tseng’s second-in-command is a witness. Now, to keep him safe long enough to locate a second witness and put Hwang behind bars, Conroy is forced into close quarters with Allen Hong, a man who once fought side by side with the Dragons until he turned his back on them by joining the police, betraying them. As sparks fly between them once more, the two men must put aside their differences and work together, because the Twisted Vipers aren’t going to let Hwang go down without a fight.

A Matter of Justice (Hong Kong Nights Book 3) by J.C. Long is a tense, complicated and terrific novel. Gritty and intense, it delves into the corrupt landscape of triads, gang wars and bought cops in Hong Kong.  Throw in a old wounded romance between a triad member and a detective and all the elements are there for one memorable story.  Which is exactly what Long gives you.

My only issue is that it took some time to remember who all the cast of characters were.  This is  definitely not a standalone novel and the importance characters and their relationship to each other almost needs a chart at the beginning if you haven’t just read books one and two in the series.  Without all the relationship dynamics being fresh in my mind, it took a while to get into the story, hence the lower rating.  But once it snapped  back into place, then the story took off and I sunk deeply into the drama and fast paced action of a gang war under way and a heinous crime boss who will let nothing stand in his way of revenge.

Conroy Wong and Allen Hong are the reunited couple at the center, one a triad member and one a cop. I loved the tension and anger here.  I did have some issues with the sex scenes. Again, another reason for the lower rating.  Not the angry sex, no that made perfect sense given their past relationship and how it ended.  But that old “no just use spit” thing that keeps cropping up now and again.  Please can we all agree that this is just exceedingly painful and needs to disappear? I mean how realistic is this?  Especially when there was still some lube left to use.  Nope, it stopped me during their sex scene and it should have stopped them.  So yes, another drop in the rating there.  Just my opinion.  Otherwise one hot couple.

J.C. Long brings us into Hong Kong with the food, the people, and the language.  There’s even a dictionary Long supplies for us at the back.  Very revealing, especially about some of the epitaphs hurled during the story.  It definitely sinks you into the city and the situation.

I recommend the series but for clarity purposes, read the stories close together.  It helps keeping all the people and their relationships fresh in your mind as many as they are.  But its one thrilling ride of a narrative and some wonderful couples.  I’m recommending them if you like action, law enforcement stories and in this case, lovers reunited.

Cover art: Natasha Snow is dramatic and works for the story and location. 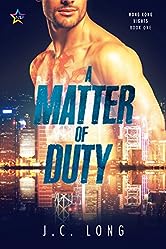 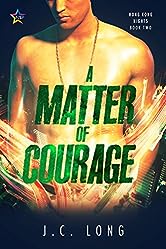