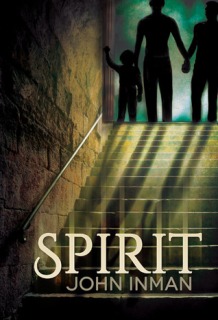 The stories of John Inman are a true favorite of mine.  I think of John Inman and his stories and immediately I start to smile. He has the ability to convey the emotions and thoughts of real people with startling issues in his stories through humor, frankness, and acceptance.  Interspersed, of course, by the occasional moments of angst.

“Laughing through our tears”  is probably a phrase most readers would associate with this author, whether it is through his books, Shy, Hobbled, or the recently released Spirit.   I invited John to talk a little about how he combines the authenticity of every day problems and real life difficulties with humor.  John has brought a copy of his latest release, Spirit, to give away.  To enter to win leave a comment and an email address where you can be contacted.  The contest ends June 4 at midnight.

Writing with Humor by John Inman

I was recently asked how and why I temper the impact of real issues with humor.

Well now, there’s a question and a half, huh?

Questions about why I write the way I do always go flapping over my head like distraught pigeons, because I honestly never know how to answer them. My motives are a mystery even to me. They always have been.

I do know there are times when I’m trying to delve into serious issues in a story and it’s an uphill battle for me to not start cracking jokes or going for a laugh. I’m talking about my writing here. In real life I’m much too shy to shoot for a belly laugh from anybody. I’m the guy sitting in the corner behind the potted palm slurping down cocktails to calm his frazzled nerves and trying to be inconspicuous. On paper, however, I’m fearless.

I honestly had not thought about it before, but behind every one of my comedies — SHY, HOBBLED, SPIRIT, LOVING HECTOR, SERENADING STANLEY — (I’m leaving out PAULIE because the only serious aspect to that story was the fact that everybody wanted to get laid, and I mean seriously.) Taking those other stories in order, the serious issues are Social Anxiety, Murder and Kidnapping, just plain Murder, Physical Abuse, and with STANLEY, an apartment building full of crazy people and the MC’s Inferiority Complex.

✍
Even my serious novels have a good deal of comedy interwoven into the story. Take A HARD WINTER RAIN, for instance. With all the people being violently mowed down left and right, that one simply cried out for mood lighteners. So I gave them to the reader through the gallows humor of two homicide detectives chasing down a serial killer. JASPER’S MOUNTAIN, too, had its lighter moments. How could there not be an underlying comedic tone when the main character had three dogs, two cats, a couple of baby pigs, and a shitload of alligator lizards infesting his mountain retreat?

✍
I think even in the most serious story lines, there is a need to lighten the mood now and then. I realize I go a little overboard with my humor sometimes, but still it serves a purpose. I know when I’m reading a long, sad, morose tale of abuse or angst or heartbreak, I require an occasional chuckle just so I won’t set the book aside periodically and toddle off to the bedroom to blow my brains out.

When I was a high school kid back in Indiana about a thousand years ago, I remember my English Lit teacher giving us an assignment to write a story about ancient Rome. Growing up in Switz City, Indiana, with a population of 212 people, and with only one stoplight, one feed store, one tiny market where the clerk doled out change from a cigar box, and about a gazillion churches, I had, of course, never been to Rome in my life, ancient or otherwise, and unless I was sorely mistaken, I was pretty sure none of the other kids had been there either.

So instead of writing a story about something I knew absolutely nothing about, I wrote a commercial. A commercial like you might have seen had ancient Rome been bombarded with endless hours of mindless television shows like we are. (Yes, even as a kid I hated TV.) Remember Cal Worthington and his dog Spot (who was actually a tiger) hawking used cars all over TV? That’s the type of guy I based my commercial on. Only Cal wasn’t Cal anymore. He was Calicus. And he didn’t sell cars, he sold chariots. Calicus stood there in his lot full of used chariots, his toga flapping around his pale skinny legs, touting the wonderfulness of his inventory in a loud booming voice, while his bigass pet elephant, Spot, followed him around like a Corgi.

I fully expected to get an F on the assignment, but strangely enough Mrs. Donahue (who I always thought hated my guts) –see? I was paranoid even then — well, Mrs. Donahue gave me an A+ and asked that I read my creation in front of the class, which I refused to do because I was just too damn shy. My best friend at the time, Linda Strietelmeier, of brave German stock, took pity on me and offered to read my story to the class in my stead.

✍
I still remember the kids laughing at my silly commercial as Linda stood at the podium reading it out loud. Even sourpuss Mrs. Donahue cracked a smile or two. I sat there looking down at my lap, blushing up a storm, and loving every fucking minute of it. Looking back now, I do believe that day was the beginning of my need to write comedy.

It isn’t a pretty story, I know. But it is my own. And as true as the day is long.

✍
Not only am I simply wired that way, but maybe even more to the point is the fact that I’m doing it because that’s the kind of writing I like to read.

And what better reason is there than that?

John has been writing fiction for as long as he can remember. Born on a small farm in Indiana, he now resides in San Diego, California where he spends his time gardening, pampering his pets, hiking and biking the trails and canyons of San Diego, and of course, writing. He and his partner share a passion for theater, books, film, and the continuing fight for marriage equality. If you would like to know more about John, check out his website at—-

If you are unfamiliar with John Inman and his stories, I have listed a few,ok a lot of my personal favorites below.  Check them out and prepare to start laughing.  It’s the only way to go.  Those marvelous covers are by artist Paul Richmond except for Spirit whose wonderful cover was done by Reese Dante.

Memorial Day.  Two words that bring forth powerful emotions and memories of both of those from our past as well as our present.  We think of the past and those deceased while at the same time our memories are full of family celebrations, and the laughter and love that speaks of life itself.

I was thinking of both of those as I watched the film on the news of the inauguration ceremony of National September 11 Memorial & Museum in NYC.  The pictures brought forth a profound sadness as the cameras scanned over the survivors and their families as well as the exhibits, stopping here and there for closeups and personal stories.  A staircase that was the only avenue for some to freedom and life stands bone white, covered in ash.  Bent, blackened metal framework from parts of the structure from the towers loom upwards over the crowds within the museum, much like the towers they once helped support.  All chilling and stark reminders of that day and our national tragedy.

But for me it was the small items that were so poignant and personal that they made the pain and loss intimate and immediate once more.  A red bandana

from a young man who sacrificed his life to make sure others got down safely.  His mother was present,full of pride for her  son, as she stood next to his photograph and his red scarf now enclosed in glass. It was the scarf that the survivors he helped down that day remember him by.  Over and over again, a young man in a red bandana grabbed people, moving them towards safety and life.  The expression on her face, so full of love, loss, and grief, was visceral as she looked at the scarf.  Another survivor was there looking at the black, dusty shoes she donated that she wore that day as she walked down all those flights of steps. She ended up caring them as she ended up finally walking down in her bare feet because the pain of going down all those steps made wearing them impossible.  Small item after item, watches, cell phones, glasses, standing side by side next to the physically imposing and massive items from the World Trade Center bombings, like a fire truck and or large pieces of masonry from the Pentagon, yes that’s there too. And there is a wall of photographs of those that died that day.  Every race, every gender,, every age….all represented there.  Forever remembered, forever immortalized.

It made me think of another wall, one full of names on black marble.  Here in Washington, DC, where huge crowds will gather on this weekend to

remember, to grieve and to celebrate lives now gone.  There will be Rolling Thunder, and parades, and the echoing refrain of Taps heard over Arlington Cemetery this weekend. The Vietnam Veterans Memorial, my favorite of all Washington memorials, stands as one of our more  striking and haunting memorials. The pictures found there aren’t on the wall but will be left by loved ones, friends, family, and fellow soldiers who come to commune with the dead and their memories.  There, as well as in New York City, the memorials will help all of us remember and help to mitigate the grief left behind.  Powerful images, powerful emotions, and a powerful almost unimaginable amount of loss.

Take a moment this Memorial Weekend and remember.  Do something that will celebrate their life as well as remember their loss.

Now for the week ahead here at ScatteredThoughtsandRogueWords:

Do not stand at my grave and weep,
I am not there, I do not sleep.
I am in a thousand winds that blow;
I am the softly falling snow.

I am the gentle showers of rain;
I am the fields of ripening grain.
I am in the morning hush;
I am in the graceful rush.

Of beautiful birds in circling flight,
I am the starshine of the night.
I am in the flowers that bloom,
I am in a quiet room.

I am the birds that sing,
I am in each lovely thing.
Do not stand at my grave and cry,
I am not there. I do not die.