No Ocean Too Deep by Leona Carver

Begzada Dastyaf, a warlord of the desert Amirate of Ujmah, descends into the deep sea to find his beloved prince and cousin, Sharouk. Not only must he navigate a strange new realm, but he must master an unfamiliar body and learn the ways of the folk who live within that dark and watery place … all while struggling with an unwanted attraction to his resentful sea folk guide, the witch Nils.

My name is Leona Carver and I’m here to talk about my new novella, “No Ocean Too Deep”, and the world in which it unfolds. I’m pleased to offer an e-copy of No Ocean Too Deep to give away.

Contest: To enter the draw, please leave a comment and an email address. The contest runs until midnight EDT June 1st, at which point I’ll draw a name from a bonafide hat.

Where will duty and love take you?

The vastness of the ocean triggers a deep sense of awe. There are a myriad of ecosystems and flora, fauna, and in-between creatures (florauna?), and we know so little about it. Every week there’s some new discovery, an animal or a piece of footage of a place that had never been seen before. It is absolutely stunning. Immersing myself in that world both thrilled and challenged me, making No Ocean one of the most satisfying stories I’ve written.

I’m from the school of, “Write what you don’t know.” I find that I’m most passionate about those stories that challenge me, make me ask questions, make me fling out the long arm of imagination to grab at answers. Dastyaf and Nils travel in a place where there is very little light and the senses are both impaired and enhanced by the characteristics of the ocean. The challenge was to describe actions, emotions, and communication without the use of vision. I drew on research about the abilities of sharks to sense the electromagnetic fields of other animals, and had Dastyaf learn the language of scents and pheromones, which gives the sea folk a nearly telepathic ability to sense the thoughts and feelings of others. If I had had the word count at my disposal, I could have filled entire chapters with Dastyaf learning his new body.

In addition to the difficulties of communicating in the sea, sans sight but with enhanced taste and skin receptors, that world adds another complexity: The entire place is alive. Tiny organisms exist everywhere, from harmful, to benign, to beneficial, and the culture of my sea folk needed to reflect that. They depend on their slimy coatings for protection; therefore, touching is limited and, when it does occur, it indicates a deep level of trust. Sea folk healers understand how some organisms can be used to fight malign organisms, how the deeper briny waters can be used to kill weaker microbes. Witches use that thick miasma of life to cast their magic, to the extreme of the leviathans, giant creatures built from the less-sentient organisms.

The people were adapted to fit the environment, influenced by existing sea creatures. Sea folk come in all forms. The Angler Fish Deep Sisters: mighty huntresses wielding bait made of light, spiky with bone, their males little more than nubs and pustules attached to their skin. The Sirens: though they can be from any species, so long as they are witches, tend to be more vulnerable species. In No Ocean, they are delicate, translucent, highly venomous jellies, and their giant nautilus entombs a leviathan.

Environment is character: Active in the story, equipped with motivations and needs, acting on the other characters and reacting to what they do. In No Ocean, the environment is partially responsible for the existence of the leviathans. They would not be possible without the soup of microbes through which magic travels and acts on the world. When witches die, if they hold onto their lives strongly enough, the sea answers them and weaves them into herself. They are eaten away over time, losing more and more of themselves as their leviathan armour grows, until they become the silent, monstrous guardians of the ocean.

It was my intention to share my love of the ocean and all she holds, and create a new and interesting world to play in. Hopefully, this came through!

No Ocean was inspired by a simple prompt: Write a romance involving mecha. Somehow, that translated into organic armour built from corals, anemones, squids, fish, crabs, etc. Thankfully, Less Than Three Press went along with it. Because, once that seed was planted, it grew into a leviathan of its own. 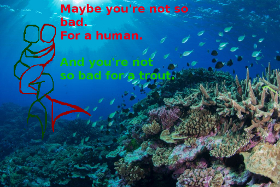 There are deep seas, deserts, castles, a hostile Republic, and even a distant jungle nation to explore. No Ocean is only the beginning.

I’m currently working on the sequel, in which Dastyaf hunts for the ingredients needed by sea folk witches to maintain their sentience and fight their leviathan nature. Once that hurdle is overcome, he’ll need to deal with the Republic. Last we saw them, the Republic had rebuilt their fleet and commenced another invasion.

As well as the direct sequel, there will be a companion series beginning with The Clockwork Centurion. This will be another M/M fantasy/romance set in a Jules Verne-esque version of post-Roman Briton, with the heavier steampunk aspects that No Ocean Too Deep mostly missed out on, other than the Republic’s weaponry. Eventually, the characters from each series will meet and we’ll see what happens.

To buck the brutal rule of the Republic, Amirzade Sharouk and his men pull off a desperate plan: Destroying the Republic’s fleet by joining forces with the legendary sea folk, masters of the leviathans, immense living weapons born of the sea and magic.

Though the gamble succeeds, one of the leviathans vanishes with a valuable human, straining an already tenuous alliance. Her caretaker Nils needs to find her as quickly as possible to redeem himself before his superiors. His search is further burdened by Dastyaf, a furious human warlord and liability in the marine realm. But after combing the deep ocean and discovering the dangers it holds, Nils realizes he may need the human more than he thought, to save his mission and himself.

Leona Carver lurks in a Canadian basement with a cat and an aerospace engineer, one of whom helps with the science while the other scratches at the window to get out. She writes novels and short stories with a penchant for genre mash-ups—because fairy tales need space stations, historical romance needs steam powered cyborgs, merpeople should wear mecha, and all of the aforementioned need a little love. Or a lot of love.

Leona has published two M/M romances through Less Than Three Press: Piper, a space age version of the Pied Piper, and No Ocean Too Deep, a deep sea rescue with giant coral monsters and angry desert warriors.

Follow Leona Carver at: Leona can be rousted from her cave via email (leona.r.carver@gmail.com) or on her website (leonacarver.wordpress.com).