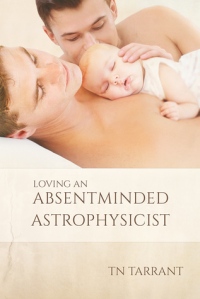 At twenty-three, Dr. Liam McGregor is a well-respected astrophysicist, astrobiologist, and geologist. With no family, few friends, and no romantic prospects, he’s used to being alone. Focusing on his various scientific projects and taking care of his decidedly unusual cat help keep the loneliness at bay.  Jareth Manning is starting life over—new town, new job—after the loss of his husband. The last thing he expects is for the most absentminded, and beautiful, man he’s ever seen to take up residence in his heart. Nor did he expect to find himself a willingly humble slave to Her Imperial Highness, Empress the Cat.

But Jareth has learned that love doesn’t come around often and to hold on to it when it does. Jareth is willing to be patient if Liam is willing to take a risk after being burned before. They just have to survive Liam’s past returning.    Eight years after Liam and Jareth marry, they want a child. Things don’t go well when they try to adopt, with terrible accusations thrown at Jareth. After recovering, they proceed with a private adoption, bringing home a beautiful little girl, Carinae. Then things get ugly, endangering not only Liam’s life, but Carinae’s.

How cute is a cat on a leash! Her Imperial Highness sure is amazing.

This book is a second edition and basically put together the two previous books in the Astrophysicist series by T.N. Tarrant. It’s a really sweet book with great MCs and some valuable second ones. I loved the plot too.

In the first part we meet Dr Liam McGregor, a twenty-three years old astrophysicist, geologist and astrobiologist, simply known as the absentminded astrophysicist. After being attacked by a colleague, he is soon rescued by Jareth, the new head of the security in the institute Liam works at. Where Liam is a chubby geek, Jareth is sexy and handsome. How can someone as the strong guard be attracted to the sweet Liam? But Jareth is determined to court him and show him he can be trusted.

“How can you think so? I’m fat, scarred, and almost constantly bruised because I can’t even keep an eye on where I’m going, or I fall all over myself when I try to,” Liam objected. “Nobody has ever really wanted me,” he whispered.

Jareth knew only time would show Liam he was serious about wanting him. “You are perfect as you are, Liam. I thought you were absolutely breathtaking the day I met you, and I still think so. […]I was paying a lot of attention to you.” Liam obviously didn’t believe what he was saying. “But why?”

“I have no idea, Liam.” Jareth tipped Liam’s chin up so he could look into Liam’s eyes. […]“To be honest, I don’t really care why. I just know that I find you beautiful and sexy as hell, and one of these days, I want to strip you down and lick you from head to toe, front and back, and have you do the same to me, tangled up together until we can’t sort out who’s where.”

In the second part we find them after being together for eight years, planning on becoming parents. It will be a really hard journey, full of hurts, crisis, accusations, and fears. At the end it will be so worthwhile to get Carinae in their life.

I liked Liam and Jareth, I especially loved how Jareth is a positive characters. After suffering the loss of his husband, he went through dark times and started drinking. Thanks to his family who saved him, now he’s going on with his life and he’s ready for a new love. He’s protective and sympathetic with Liam and his world.

Son of two genius parents, Liam had an incredible and really bad youth, he was stabbed almost to death by his mother cause she couldn’t stand him for being smarter than her, with his father as witness. Liam lives for and in his work, he’s pretty much lonely, apart from his cat Empress and the sweet Aimee. He’s not used to be loved cause a lot of people took advantage of his great mind, just used him.

I put this book in my comfort list, a beautiful list to me. First of all it means that I’m surely going to reread Loving an Absentminded Astrophysicist.  I really loved it, it was an emotional reading but at the same time all the bad things were faced with lightness and positivity. So this is definitely a book to reread when I need a hope glimmering in a dark moment. So happy to have met Liam and Jareth and really well done, TN!

Cover Art by Bree Archer. What can I say about it? I’m a sucker for children, so I honestly can admit I even have read the blurb before requesting the ARC. I saw the cover and I had to read it. So if the aim of a cover is to catch the reader’s eye before the story, this cover to me is a winner, so sweet cute aww.