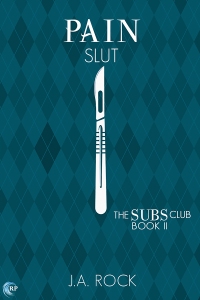 Miles is a pain slut. In fact, he’s the resident authority on pain among members of the Subs Club, a group formed a few months before in “an attempt to give submissives a private place to discuss safety concerns in the kink community.” As the story opens, Miles is participating in a scene with one of his favorite sadists. The scene is explicit and uses medical props so those who are squeamish and not able to read about masochism will be able to test their tolerance early in the story. But for Miles, it’s what he wants and needs, and he’s still suffering the aftereffects (swollen testicles) when there’s an emergency at his business, and he has to go in to take care of it.

He’s dressed in loose-fitting sweats and a T-shirt and slinks in the back door because he doesn’t want anyone to see him. Of course, that’s when the customer at his custom shirt design company spots him. Miles looks up, and up, to the six foot seven inch tall, gorgeous, long-haired, blond man who smiles back at him with shiny, sharp-pointed teeth. And, yes, it turns out his customer, Drix Seger, is a vampyre—a member of a community who believe in feeding on the prana, or life force, of others. He tells Miles he’s a sadist and he likes blood play, but his real kick is in feeding on persons with a really powerful life force.

Miles has met the perfect man for him. Drix is not only a sadist, but he’s willing to train with Miles’s favorite Dom so that he can meet his need for pain. But Miles is in a quandary—he’s just been approved for adoption, and he’s fearful his lifestyle will interfere, causing the agency to turn him down. Staying involved in the Subs Club as they extend their meetings to include community outreach to college campuses and other groups, and staying involved with Drix, knowing he’s risking the adoption with this relationship have Miles’s head spinning. And the more he spins out of control, the more he needs to submit to pain.

At a deeper emotional level, Miles has never learned to share his feelings with others. He keeps them bottled up and rarely shares with his family, his friends in the Subs Club, or even with Drix. He wants to— especially now that he’s beginning to feel so much for Drix, but he can’t seem to force himself to do it. He doesn’t realize it at first, but all of his carefully erected emotional walls are starting to crumble as he learns valuable truths about himself. Can he leave the Subs Club behind? Will he be able to adopt? Can he find his HEA with a vampyre?

What I most enjoyed while reading the book was meeting Miles— being treated to a glimpse of his psyche as he moved from a serious playtime pain slut who took control of his scenes to a totally wrecked and blissed-out pain slut whose heart and mind are placed totally in the hands of his sadist, his lover, his man, Drix. Add to that, his insights into his ability to be a good parent, his fears that his inability to make a decision will make him a bad parent and poor role model, and his awakening love for and dependence on Drix, and I was totally wowed.

~~~~~
Cover Art by Kanaxa shows a small surgical knife against a teal blue argyle background. The background, using different colors, is being repeated throughout the series, and a different BDSM-related symbol will be displayed on the cover each time. I like the way the general look of the cover links all the stories in the series.