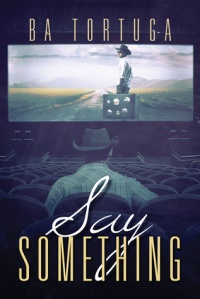 Jensen Thackerson has loved Mike Simon throughout high school.  Mike was always the rising star even then and Jensen knew Mike was destined for something bigger than their small town.  When Mike leaves for college, Jensen stays behind on the family farm in Texas.  Ranching and being a cowboy is the only thing that Jensen knows or thinks he’s good at, other than loving Mike.  But being in that small town atmosphere means that Jensen will forever be in the closet, about his feelings for men and Mike in particular.  It means abiding by his family’s expectations suborning his own dreams and love in the process.

Mike Simon is thrilled to leave Texas behind.  It’s a place he never felt he belonged.  When acting and UNC beckoned he took off, his only regret was leaving Jensen, the boy he loved behind.  As close as two boys could be, they could never figure out how to move their relationship past friendship into romance and beyond.  As Mike’s journey to stardom begins, Jensen and Mike cross paths again and again, but always with the same results.  Mike rockets upward and Jensen remains in Texas, a place Mike never wants to see again.

As the years pass along with personal milestones for them both,  a tragedy gives Jensen and Mike one last shot at a relationship and togetherness.  But it will take  courage and  trust, something both have lacked in the past, to make this last chance work.  Could the timing finally be right for love and a HEA?

I have taken my time writing this review for Say Something by BA Tortuga because this story has me so divided over my thoughts about the writing, the characters, and the narrative.  I have loved BA Tortuga from the moment I read her Stormy Weather and Roughstock series.  A prolific writer, I could always spot a BA Tortuga story from the opening line. I didn’t have to look for the author’s name because Tortuga’s impeccable regional voices and dialects combined with an intimate knowledge of her settings and regional culture leapt off the page with a vitality that couldn’t be ignored.   Her boys bounced, drawled, bucked and rode off into the sunset with humor, sexiness, and a charisma that few other authors achieved.   Even when this author’s stories lacked one element or another, there was always something uniquely  hers that set them apart and made them  worth reading.  So to say my expectations regarding Say Something were high is a tad on the understated side.

Did this story even come close to meeting those predictions? Unfortunately not.  Had the cover not plainly stated that BA Tortuga authored Say Something I would never have guessed this was written by her.  And that disappointment flavored my overall view of this story and its characters.  Readers without prior knowledge of BA Tortuga, and therefore, lacking in assumptions, might have a differing outlook.  But I don’t think so because other elements as well crowd in to make this one of the harder reviews I have had to write.

Say Something’s plot is large in scope,including its timeline.  From high school students to middle age and beyond, this story covers decades of Jensen and Mike’s lives, the majority of which is spent apart.  Tortuga’s novel has Jensen and Mike’s life break off in far different paths at the end of high school.  One stays closeted and down on the farm, the other is out, proud, and rocketing to fame and fortune.  Only tragedy, terminal illness and death brings them back together…again and again.  Each reader will have to look at their own tolerance for this meandering, frustrating, and in my opinion, unsupported  separation between them.  I say unsupported because the rationale for Jensen’s actions and rejection of Mike feels believable only at the beginning.  After a decade or so, it becomes as tiresome and forced as Mike feels it to be.  It’s never a good thing when I find myself wanting to see a main character die off by mid story, so yes, my tolerance for the character of Jensen and the various contrivances the author uses to keep Mike and Jensen apart started waning pretty quickly.

Even when these two come together where is the joy?  The joie de vivre so associated with characters that feel breathtakingly alive?  Not here. Neither are the quintessential colloquialisms or regional flavor that add so much depth to her men and women and settings.  Instead there exists a blandness and anonymity to the locations, people and events that take place throughout the decades here.  And when this element of tepidness and well, just overall sense of “beigeness” that hovers over the characters along with the disheartening events (terminal illness, and death) that the author uses to bring them  together over and over again…well, then this turns into one sad and seemingly interminable journey.

What will also bother readers (without giving away spoilers), is that both men have other romances and love affairs, meaningful ones, throughout their lives apart.  That was a very realistic aspect to this story but I know that some readers will be put off just by that element alone.  Some readers will say “why harp on a lack of joy amidst so much sadness and death?  Because it’s the need to feel alive that’s missing here, from the characters and from the story.

So why give it 3 stars?  Because BA Tortuga is still an accomplished author and sections of this story are very well written whether or not I think it comes together as a whole.  That alone deserves a 3 star rating and it gets one.  If you are a fan of stories of this type and content, you might be the reader Say Something is looking for.  For all others,, pick up one of BA Tortuga’s other stories.  There are many to choose from and several that are sure to delight.  Start there to get familiar with BA Tortuga and the stories that make her a “go to author’ the majority of the time.

Cover Artist: AngstyG has created a beautiful cover in tone and composition.  Love it.