It’s Share the Love Collection Tour – Part Deux!  The holidays are a time of joy and giving.  Riptide Publishing and authors Jane Davitt, Kelly Jamieson, and Sydney Croft have combined their efforts in the Share The Love 2014 Collection for Charity.

Check out Jane Davitt’s story, Lucky Strike and then read the details how YOU can help choose the LGBTQ Charity to receive the 2015 collection proceeds! This year’s Share the Love collection Charity is It Gets Better organization.  Pick up a copy of Share the Love 2014 and get a head start on the holiday giving,, and then help out your favorite local LGBTQ charity as well! 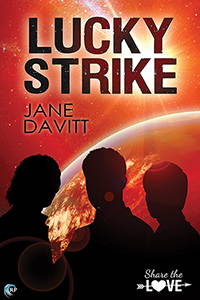 Death’s a heartbeat away, but love is even closer.

Flying a traveler to Leap celebrations on the luxury planet Crestal is no problem for intrepid partners Jake and Rill, even if they have to navigate a deadly meteor shower to get there. But their fresh-faced, privileged passenger is carrying more than Leap gifts: Lian has a message to deliver, treachery and murder to avenge, and a killer close on his heels.

Lian thought he was ready for independence from his overbearing extended family, but his first solo trip off-planet has landed him in a nightmare of deadly intrigue. Though he’s devastated by betrayal, and no longer able to tell friend from foe, he’s fascinated by the gruff pilot and scorchingly handsome first mate who’ve become his reluctant rescuers.

With a dazzling fortune at stake and the fate of the United Protectorate of Planets in their hands, there’s no time for the three men to fall in love. But with their future measured in hours, crew and passenger may have just enough time to discover that three can become one, and that together they are strong enough to beat any odds.

Each year, Riptide Publishing releases a holiday collection in support of an LGBTQ charity. Twenty percent of all proceeds from the  Share the Love collection  will be donated to the  It Gets Better Project.

This collection would not be possible without the talent and generosity of its authors, who have brought us the following holiday stories:

Jane Davitt is English, and has been living in Canada with her husband, two children, and two cats, since 1997. Writing and reading are her main occupations but if she ever had any spare time she might spend it gardening, walking, or doing cross stitch. She’s recently taken up yoga and loves discovering her ability to bend.

Jane has been writing since 2002 and wishes she’d started earlier. She is a huge fan of SF, fantasy, erotica, and mystery novels and has a tendency to get addicted to TV shows that get cancelled all too soon.

She owns over 4,000 books, rarely gives any away, but is happy to loan them, and is of the firm opinion that there is no such thing as ‘too many books’.

Every comment on this blog tour enters you in a drawing for a $25 Riptide Publishing store credit. Entries close at midnight, Eastern time, on December 7. Contest is NOT restricted to U.S. entries.

(If you can’t or would rather not include this whole text, here is the link to our website. Feel free to include as much or as little as you would like: http://riptidepublishing.com/help-us-choose-charity)  Help us choose a charity!

Every year, Riptide Publishing releases a Holiday charity bundle with themed stories by bestselling authors. Twenty percent of the net proceeds of each bundle goes to a charity that serves the LGBTQ population.

Royalties from Riptide’s 2013 Home for the Holidays charity collection have raised over $14,000 in nine months for the Ali Forney Center, and continue to yield several hundred dollars per month in royalties donations. Our 2014 Share the Love charity collection will be raising money for the It Gets Better Project, and we hope to report even better results than in 2013.

For 2015, the theme will be Holiday Surprises, and we’ll have stories by HelenKay Dimon, Christine d’Abo, and Marie Sexton. But we don’t have a charity yet.

We need YOUR help to choose the 2015 charity.

Nominate your favorite LGBTQ charity below and Riptide might choose it as the 2015 Holiday bundle charity!

The chosen charity for 2015 will immediately receive a $5,000 advance against royalties (paid in 2015 on announcement of the award recipient). The charity will continue to receive 20% of all lifetime net sales income from the 2015 holiday charity collection, in the form of a monthly royalty check.

Three honorable mention charities will each receive a $250 donation.

Click here to nominate a charity. Both supporters and representatives of a charity can submit a nomination.