Read an Excerpt/Buy It Here at Riptide Publishing

Scattered Thoughts and Rogue Words is happy to host L.A.Witt and Cari Z. on their Suspicious Behavior (Bad Behavior #2) Tour.  After checking out the story, be sure to enter the giveaway below.

Detective Darren Corliss is hanging by a thread. In between recovering from a near-fatal wound and returning to work at a hostile precinct, he’s struggling to help care for his ailing brother. His partner and boyfriend, Detective Andreas Ruffner, wants to help, but doesn’t know how. And with his own family crises brewing, Andreas is spread almost as thin as Darren.

For cops, though, life takes a backseat to the job. When a stack of unsolved homicides drops into their laps, Andreas and Darren think they’re unrelated cold cases. But when a connection surfaces, they find themselves on the tail of a prolific serial killer who’s about to strike again.

Except they’ve got nothing. No leads. No suspects. Just a pile of circumstantial evidence and a whole lot of hunches. Time is running out to stop the next murder—and to pull themselves back from their breaking points. 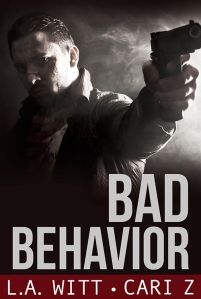 About the Bad Behavior Series

It’s “hell no” at first sight for newly partnered detectives Andreas Ruffner and Darren Corliss. Darren is too chipper, Andreas is too gruff, and that whole “IA wants me to prove you’re a dirty cop” thing really doesn’t get them off on the right foot.

It doesn’t matter if they like each other. They’re partners and that’s final. Though Andreas is easy on the eyes. And Darren is kind of cute. And . . . okay, maybe they can make this work.

They’d better, because as their cases get more horrifying—and more personal—they’ll have to trust each other with their lives, and with their hearts.

Cari Z was a bookworm as a child and remains one to this day. In an effort to combat her antisocial reading behavior, she did all sorts of crazy things, from competitive gymnastics to alligator wresting (who even knew that was legal!) to finally joining the Peace Corps, which promptly sent her and her husband to the wilds of West Africa, stuck them in a hut, and said, “See ya!” She also started writing, because some things she just thought she could do better. She’s still climbing that ladder, but can’t stop herself from writing, or from sharing what she creates.

Cari enjoys a wide range of literary genres, from the classics (get ‘im, Ahab) to science fiction and fantasy of all types, to historical fiction and reference materials (no, seriously, there are so many great encyclopedias out there). She writes in a wide range of genres as well, but somehow 90% of what she produces ends up falling into the broad and exciting category of m/m erotica. There’s a sprinkling of f/m and f/f and even m/f/m in her repertoire, but her true love is man love. And there’s a lot of love to go around.

Cari has published short stories, novellas, and novels with numerous print and e-presses, and she also offers up a tremendous amount of free content on Literotica.com, under the name Carizabeth.

Connect with Cari at http://cari-z.net/  or via her blog, http://carizerotica.blogspot.com/

L.A. Witt is an abnormal M/M romance writer who has finally been released from the purgatorial corn maze of Omaha, Nebraska, and now spends her time on the southwestern coast of Spain. In between wondering how she didn’t lose her mind in Omaha, she explores the country with her husband, several clairvoyant hamsters, and an ever-growing herd of rabid plot bunnies. She also has substantially more time on her hands these days, as she has recruited a small army of mercenaries to search South America for her nemesis, romance author Lauren Gallagher, but don’t tell Lauren. And definitely don’t tell Lori A. Witt or Ann Gallagher. Neither of those twits can keep their mouths shut . . .

To celebrate the release of Suspicious Behavior, one lucky winner will receive a $10 Riptide credit and their choice in an ebook from each of Cari and L.A.’s backlist! Leave a comment with your contact info to enter the contest. Entries close at midnight, Eastern time, on August 26, 2017. Contest is NOT restricted to U.S. entries. Thanks for following the tour, and don’t forget to leave your contact info! 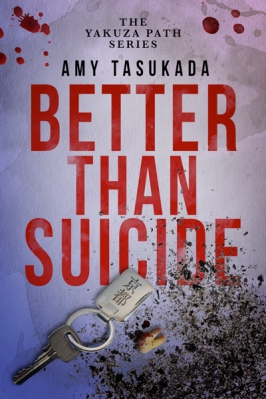 
A stash of drugs. A twisted cop. A mob on the verge of self-destruction…

Nao Murata is the new godfather of the Matsukawa syndicate. When Detective Yamada confronts Nao over a dead drug dealer, Nao knows his organization isn’t responsible. The Matsukawa doesn’t deal drugs… or does it?

When Nao discovers drugs in a locker owned by his syndicate, he no longer knows who to trust. With the police bearing down on the Matsukawa, Nao must make unlikely allies to find out the truth. Can he discover who is betraying him before time runs out, or will everyone suffer for a crime he didn’t commit?

Better Than Suicide is the second book in a Japanese mafia thriller series. If you like complex plots, gripping suspense, and a splash of romance, then you’ll love the next installment in Amy Tasukada’s Yakuza Path series.

Buy Better Than Suicide to start the race against the clock today!

This can be read as a standalone.

Amy Tasukada lives in a catless home in North Texas. (She enjoys cats but can’t quite make that kind of commitment yet.) As an only child her day dreams kept her entertained, and at age ten she started to put them to paper. Since then her love of writing hasn’t cease. When she’s not chasing after stray cats, she can be found drinking hot tea and filming Japanese street fashion hauls on her Youtube channel.

It’s Detective Keegan Monroe’s first day off after a long undercover assignment and all he wants to do is relax and enjoy his coffee.  But his day is shattered when a  man dives in front of him throwing them both to the ground.  Then a gunshot goes past them as a murder attempt fails.  The man laying on top of him is stuttering that he couldn’t let him kill Keegan.  Suspicious of his savior, Keegan takes the man into custody for questioning.  But at the precinct some astonishing facts are revealed. The suspect is a former I.A . police detective.

Detective Brennan McGuire has been struggling to adjust to the brain damage he incurred when his car went over a cliff during an investigation.  Along with stuttering and the massive physical scarring caused by the accident, Brennan also has long and short term memory problems which make it almost impossible to cope with the requirements of every day life.  Brennan can’t remember the accident or much else about his life as a police officer.  But something sparked in the depths of his traumatized memory when he saw someone aiming a gun at the man at the table and he reacted.

I think Annmarie McKenna has the makings of a terrific story here but several issues, including the ending, leave it at that – just the ingredients and nothing more.  I loved the idea of a brain injured detective whose traumatized brain holds the key to his injury and much more.  It’s a great plot tactic because it pulls in those readers who love the hurt/comfort element while upping the tension and anticipation in the story for the moment when the character remembers the past and pulls it all together in a satisfying denouement.   And it works for most of the story. Right up until the author throws it all away.

Detective Brennan McGuire’s life’s a mess.  He can barely remember the social niceties that get people through the day, let alone  pay for a cup of coffee. As created by McKenna, he is an object of sympathy and engages our affections immediately.  I liked her treatment of his brain trauma.  He is still touchy and snarky even if he can’t remember the simplest thing like a pepperoni pizza or to shake the hand offered to him.   His is a beautifully layered portrait of a man coping with brain trauma and not always succeeding.

Keegan Monroe is a somewhat less effective character.  As a detective who immediately gets sexually involved with a suspect, and a brain damaged suspect at that, Keegan appears to have a less than solid grasp on police ethics, not to mention the appearances of taking advantage of someone in recovery.  I got that the sparks flew between them.  McKenna does a more than credible job making us believe the men can’t keep their hands off each other.  But the facts about their relationship and Brennan’s physical and mental state kept me from throughly investing myself in their affair.

The author does a good job in plotting out the mystery for the readers.  She slowly gears up the anxiety over the safety of the men as more and more facts about  Brennan are revealed. But all the suspense and anticipation is demolished in an ending that is rushed and incomplete in terms of motives and facts.  I was, in fact, astonished when I came to the end.  All that build up and the reader gets nothing for their time and effort spent on this story.  It pretty much just stops with no real explanation, no satisfactory reveal of  all the criminals, and certainly no resolution to the relationship of a detective and a still brain damaged individual.

And that is a shame because this book could have been so much more.  With a longer, more fully developed ending and perhaps even an epilogue, this could have been one of my “must read” recommendations.  But as it is, I will say that if you are a fan of Annmarie McKenna, then pick this up.  But if you are looking for romance, a terrific mystery and an ending that will leave you satisfied, then head elsewhere.

Cover by Angela Waters.  This is just a generic cover that has nothing really to do with the story.  Grade C for effort.