All he ever wanted was to be a normal guy…. 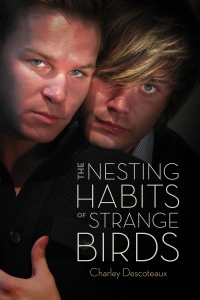 Phil Brask’s life has been one of abandonment and abuse. Jerry Callahan found and rescued Phil after an attack.  Jerry offered Phil a job, and a home as well as a becoming a mentor to the younger man.  Now Phil lives in Jerry’s basement.  He spends his days in solitude, converting legal documents into electronic format. When Phil is not working, then he lives behind the lens of his camera, photographing nature, including the nesting habits of migratory birds. His only friend and outside contact continues to be Jerry, the father figure and mentor, who understands Phil and his issues.

When the pipe feeding the water heater bursts, Phil’s life undergoes a dramatic change. Plumber Lee Redding arrives to fix the pipe and water damage done to the basement where Phil lives and works. The two men establish a shaky and instantaneous attraction.  And before Phil is even aware, he is drawn away from the narrow focus of his computer and camera lens. Lee gives Phil hope for a life past the walls that Phil has built around himself.  Lee’s arrival  expands Phil’s universe as he meets Lee’s family and band. But there’s a reason Phil retreated behind those walls, why he panics at a simple touch.

Lee’s life is full, if not exactly what he had wanted. He works  with his uncle and helps out on his mother’s farm. He  playis bass in a horrible metal band, and hooking up when he pleases—but he’s always suspected something was missing. When he meets Phil with the icy-blue eyes, he knows exactly what that something is. Phil isn’t like other guys, but neither is Lee beneath his carefree exterior. Lee has his own demons to fight.  Between the two of them, maybe they can help each other past their issues and histories into a future both have always dreamed of.

From the wonderfully quixotic title to the intriguing blurb, this was a book that drew me in with just one glance.  It is also the first book by Charlie Descoteaux that I have read but it certainly won’t be the last.   The Nesting Habits of  Strange Birds is a wondrous journey into the complex minds and lives of two wounded men and their families.  From the surface, each group seems so dissimilar.  But upon closer inspection, each young man carries the scars of their past, if not upon their bodies, then upon their inner selves. And each man’s family (in Phil’s case, it is Jerry) is as different and supportive as each one of the them needs them to be.  The family dynamics and individual give and take found in this story were among the highlights of this amazing novel.

In particular, I loved Lee’s family. It consists of Lee’s mother Tina who runs a holistic farm, his sister Becca who I just adored, and his Uncle Lenny who will grow on you by the end of the story.  Phil’s adopted family can be found in Jerry Callahan, whose past makes him ideal to act as a mentor and father figure to Phil. Every character here is a believable human being, consisting of layer after layer of values, beliefs and faults.  There are so many surprises and delights to be found amongst this group, none of which I am willing to spoil for the reader.  The joy is in the nature of these individuals and the matter of fact manner in which Charley Descoteaux slowly reveals the family dynamics and close relationships found between them all.

Descoteaux’s descriptions are vivid and gripping in their naturalness and authenticity.  The author’s imagery pulls you into the scenes and keeps you involved and part of whatever situation is unfolding at the time.  It doesn’t matter whether it is the Great Blue Herons interacting with their young that Phil is photographing and Lee is observing for the first time or Phil’s introduction to Lee’s band and ear numbing music.  It’s carries an emotional wallop while continuing to be totally absorbing.

Is this story for everyone?  Well, it depends if you are looking for a story that is strictly romance or one where the romance is just another lovely thread in the narrative. If romance is your goal, then perhaps The Nesting Habits of Strange Birds isn’t the story for you.  This story certainly has its dark moments as it should given each man’s background and emotional status.  And the narrative slows down to deal with issues raised during the course of the story line.  There are no “instant cures” for the ailments and issues carried deep inside Phil and Lee.  Instead it documents how these two can learn to adapt, changing enough to allow their lives to expand to include love for each other and their families.  That they achieve it is remarkable and heartwarming.

I absolutely recommend The Nesting Habits of Strange Birds by Charlie Descoteaux.  It’s a slow, thoughtful read with complex characters who find themselves trying to deal with life and sometimes difficult situations.  Its full of love, family, and the strength and courage needed to live a life beyond the barriers we erect to protect ourselves, even if it means that sometimes we get hurt in the process.   Pick it up and decide for yourself.

Cover art by DWS Photography.  I wish there was more to this cover than just two models.  It just doesn’t speak to the story within.

The Nesting Habits of Strange Birds