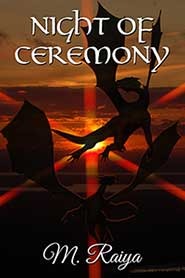 Just days after their wedding, high school teacher and dragonshifter Adrian Kendall and his human husband Josh have new trials to face before the two of them and their newly adopted dragon shifter daughter, Jenny, could settle down to a normal family life. Well, as normal as any family that is made up of a dragon shifter, a human with special gifts and a half dragon shifter adopted baby girl.  Also included in their family is Huntington, Adrian’s brother, Justin and Wells (an ancient dragon and his knight partner) and many others.

The ceremonies Adrian and Josh must face are those of dragonkind.  One to see if Adrian’s clan will accept Jenny as their daughter and the other to see if the clan will accept Josh as his mate  No little stress there. But unknown to all, a much larger event is on the horizon, one that will change the future for the young family and all around them, if any survive the night of ceremony.

I love this series by M. Raiya and this book is an excellent example of why it deserves not only your attention but affection as well.  We have just been witness to a remarkable wedding of Adrian and Josh, their adoption of a half dragon child and the entrance of a ancient black dragon and knight with unknown connections to Adrian and his clan.  Night of Ceremony picks up shortly thereafter, with the celebrants still basking in their happiness.  But Adrian and Josh are also facing many new potential obstacles to their happiness and union, and that would be Adrian’s Dragon Clan.

M. Raiya has been developing a complex wonderful dragon society that exists along side the human one and each book delivers new aspects of the ancient society’s culture and laws.  Like our present world, the society of dragons is slowly being modernized, from their evolving views on remaining hidden to their complex relationships with their knights.  Within every story, the author offers up some new aspect of the changing dragon viewpoint along with a human problem of equal complexity, mostly revolving around Josh and Adrian’s relationship.

I find the author’s characters just amazing, from M. Raiya’s ability to get us into the mind of a nonhuman dragon like Adrian and Justin to one of the more interesting and complicated characters around, that of Josh the increasingly gender fluid husband of Adrian. In Adrian’s inner circle, there are both humans and dragons which gives the author plenty of subjects when addressing the differences between cultures, their views on equality and sexuality.  All of the characters are just so well done here.  Huntington the brother has changed greatly from the first introduction in Notice (Notice #1) when he tried to kill Adrian, the brother he didn’t know he had to the full acceptance of his role as beloved brother and confidant, gifted in his own right with special talents unknown in other dragons. Even the new baby Jenny has enough interesting aspects to her personality that I look forward to new stories involving her development. But there is one that is so special, so remarkable, that I find him hard to describe, a fact he would surely applaud.

That character would be Josh. I love Josh so much and of all of the characters, his is the one to experience the most growth and change of them all.  When we first met Adrian and Josh, they were dating and Adrian was unsure of his feelings for the very “femme”, very flamboyant Josh.  Adrian had always been attracted to masculine gay men and Josh was the very anthesis of that.  Over the series, we have watched Josh wear women’s clothes, apply makeup in a manner that demonstrated a perfected skill and reveal that he is troubled and unsure about his gender identity.  And while we are learning so much about Josh, including his horrific backstory, Adrian is learning about acceptance not only of his own homosexuality and of Josh’s but to come out of the closet in his communities (human and dragon).  M. Raiya’s treatment of Josh, Adrian and their relationship is one of this series shining features.  Here is one of my favorite excerpts.  Huntington, Adrian’s brother, has just realized that Josh prefers to use the womens bathrooms instead of using the mens facilities and wonders aloud to Adrian as to what it means:

“Damn! I mean, I’ve gotten used to having a gay brother.”

I paused and then said levelly, “You still have a gay brother.”

“Yeah, but if Josh is in a dress walking down the street, and God knows he can pull off female, then everybody’s going to think you’re straight!”

“And why do we care what everybody thinks?”

Huntington started to say something, but then Josh walked out of the women’s room, a diaper bag over one shoulder, Jenny on his other, and he tossed his hair back from his face and gave us a dazzling smile.

After a moment, Huntington did, too. ***

Perfection and nothing more needed to be said.  So many joys to be found in this small gem of a series.  All of the stories that makeup the Notice series are short in length for the most part. Notice has the most pages at 176 pages. But most are under 75 pages in length.  I have listed them all at the bottom of the review in the order they were written and should be read.

Are there issues with the stories?  To be sure as none really exist as stand alone fiction and some are lacking in backstories and world building if not read as part of the series.  But the positive points of the series far outweigh any qualms you might have with other stories in the same universe. This really is a lovely story. A terrific little tale in a gem of a series by an author whose works I continue to look forward to.  Start with Notice and work your way forward.  I think you will find yourself just as affected by Adrian and his Josh as I am.

Here are the stories in the series in the order they were written and should be read:

Nice: The Dragon and The Mistletoe (Notice #2) (review included with Notice)

Stories in the same universe:

A Dragon and His Knight

Origin in the Shifting Steam Anthology.

Short and sweet today.  It’s Mother’s Day and the cookout here is only hours  away.   Plus it’s my birthday week, so I expect to have a hopefully fun filled, jam packed schedule.   So if life and my schedule permits, here is the week a head in reviews:

So there it is. Got to go.  Wish like mad it would warm up,  Poor plants, flooded and now cold.  Is that a sniffle I feel coming on?