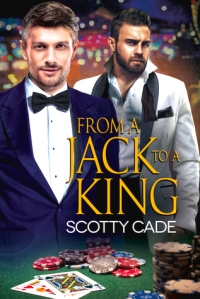 New York Times best-selling mystery writer Bay Whitman leads the life of a celebrity—at least on the surface. In public he’s self-assured and in control. Women hang on his every word, while men envy his confidence and swagger. But in reality, Bay is a loner. He’s shy and introverted, and his life consists of sitting in a dimly lit room writing his famous Jack Robbins mystery novels. His one vice—gambling. Winning an escort in a poker game will change Bay’s life in ways he never imagined.

Matthew “King” Slater is one of the hottest tickets in gay porn. He spends his days in front of the camera and his nights as a highly paid escort to the rich and famous. Deep down, he craves romance and a real connection, but his past makes it hard to separate the needs of his body from those of his heart. For now, it’s easier to think of sex as just a job. But while doing a shoot in Vegas, King is hired for a tryst at a famous hotel and casino, and his handsome client might blur the line between work and play.

OK, I’m going to admit right off the bat, I misjudged this book.  Not by it cover, but by the synopsis!  I thought I was going to get a typical high priced call guy/porn star meets and transforms a nerd sort of story and gets a life makeover himself.  All of which does kind of happen.

But…and it’s a huge one, Scotty Cade takes that barest of well if not themes, then outlines and fleshes it out with surprising twists in his characterizations, story framework, and unique elements.  It begins with his multiple pov, told from both Matthew “King” Slater and Bay Whitman.  We don’t actually hear the name Matthew used much until the end of the story which is appropriate because for much of this novel, it’s King Slater, the vastly popular gay porn star and high priced escort that you hear from.  We meet him in the middle of a “shoot” for a porn film, taking a call for a hookup later on.   And it’s our first inkling of the twist that’s coming when  we hear King’s inner thoughts, both on the shoot and the escort job to come.  The layers that Cade start to pour over his character to distinguish him from others you might have stashed away in your mind.  I don’t really want to give away the issues with King.  But needless to say, the author has done considerable research and it comes through how King internally voice’s his insecurities and deep fears.  It’s believable and his actions at all times feel authentic.

So too does the bullying element that has played such a restrictive, altering role in Bay Whitman’s life.  The author mentions the horrible effects that childhood bullying have had on him and it translates into the  character of Bay in the story. That simply said, they carry over into adulthood with often surprising ramifications on that persons life.  With Bay Whitman, Scotty Cade is able to show what course those repercussions might have taken with one person.  And again, Bay becomes someone you can connect with, a person who needs to create a persona to deal with the “outside”, to handle people and events that he himself thinks are beyond him.  It’s so easy to emphasize and feel compassion for both individuals.

I enjoyed the path the author plotted to their HEA, as potentially loaded with emotional potholes and outright craters I kept waiting for them to fall into. But the author was kind and, I believe, sympathetic  himself towards this pair that needed each other and love so badly.

He gives them a ending that, perhaps I had to suspend my belief a little more than usual (which is why the rating) but it’s also a tremendous way to end the story.  Did I enjoy it? Absolutely.  I was rooting for them after all.

I think you will too.

I definitely recommend From a Jack to a King by Scotty Cade.   If you love romance, and for two men who deserive a chance at HEA, I think you will love this contemporary novel.

Cover art: Paul Richmond. You can always pick out a Paul Richmond artwork.  This one is absolutely perfect for the characters, story, and of course, the cover.  Love it.