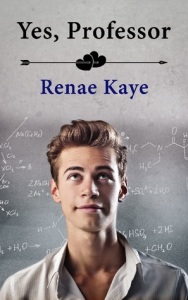 Twenty-two-year-old Avery Stewart has a crush on his neighbour. Always attracted to older men, Avery is tantalised by Mr Redding’s professorial looks and obvious obsession with perfection.

When he finally gets the courage to speak to Christopher Redding, Avery manages to get invited back that evening on the pretext of bringing a cake for Christopher’s birthday. But things don’t work out how Avery had planned, and he finds himself sent home with the cake and without any intimacy.

Christopher is everything Avery has ever desired—older, self-assured, dominant, and intelligent. Avery needs someone in his life to take charge—in and out of the bedroom. He wants Christopher to be that man. However, Avery must first convince Christopher to take a chance on him.

Renae Kaye is a “must read” author for me.  I adore her stories and The Shearing Gun is among my all-time comfort reads.  So you can image how eagerly I await each new story by her.  Yes, exactly!  With a high degree of anticipation over the type of main male character I will find and the story Kaye has decided to tell for him.  Usually she throws a quirk at her readers and its no different here.

Avery Stewart is has some of the same elements I expect from Renae Kaye.  He’s got his  own brand of quirkiness while Kaye explores yet another ray of the Rainbow sexuality (or any sexuality for that matter) – this time its that of control and older men .  Here it translates into Avery’s obsession on his older neighbor, Mr. Christopher (not Chris, thank you very much) Redding.  Avery’s unable to focus for very long on things like his  studies or goals or anything other than his object of lust, Mr. Redding.  His day is almost planned around how to meet the man next door who he watches trim his hedge row very meticulously in his very trim, neat, meticulous clothing.

I have to admit Kaye almost lost me completely within the first 5 pages of this story.

But it was Kaye so I read on.  Yes, Avery does grow on the reader.  I sympathized with him and almost with his obsession.  Which I never, ever got.  Even after meeting the man.  That’s the crux of my issue with this  story.  I never really got a feel for Christopher Redding or felt any chemistry between him and Avery.  Any real insight into Christopher Redding the man came too late for me and as a reader, that all important connection to him and to them as a couple was never made.  That loss which was so surprising in a Renae Kaye story was one that Yes, Professor never recovered from.  I won’t go into any aspects of insta-love vs obsession, although an argument could certainly made for it here.  That would take up pages.  Lets just bring it all down to super control vs super flighty.

I love the full range of the variety of types of characters Kaye has shown us in her stories.  Whether its Shawn of Shawn’s Law (love, love him) to Jay Bell of Loving Jay to the gruff Hank of The Shearing Gun and the miner Lon Taylor and young Casey of Safe in His Arms, and everything in between.  Twunks, twinks, blind men and their housekeepers.  Kaye’s imagination has ranged magically all over the place so a unfocused Avery and a dom Prof shouldn’t have been a issue but somehow it just never gelled for me.

Maybe I’m overthinking this here.  Its just I look for such high storytelling standards in her novels and I think Yes, Professor didn’t hit them in my opinion.  Others may pick it up and find it a nice  romance with D/s elements (yes, there are  those here).  I will be waiting on the next  Renae Kaye story to arrive.  She always has something different in store for the reader.  Its just that this one wasn’t for me.

Cover art is cute but that guy seems too conservative for Avery.