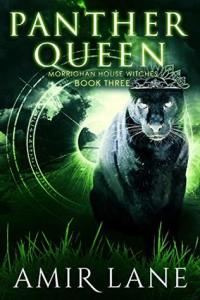 “That’s panther queen to you.”

When cattle rancher Lenna Alvarez rescues a black jaguar, she discovers there’s more to the animal than meets the eye. Bonding with a centuries-old Aztec Warrior wasn’t part of her plans. Then again, neither was simultaneously facing off against an American businessman and poachers encroaching on her family lands.
With her newfound powers, Lenna is sure the poachers don’t stand a chance. Only, Lenna isn’t the only one bringing strange animal powers to the game. The poachers have them too, led by businessman Ansen Peters. Lenna is in over her head, and not even the jaguar can save her.

Ansen Peters doesn’t want the ranch. He wants the jaguar. And he’s willing to kill her for it.

How to review Panther Queen (Morrighan House Witches #3) by Amir Lane?  Ok, let’s compare it to the experience of going out to dinner at a well known restaurant.  They are a fine dining establishment with an elevated cuisine due to their chef and their menu.  You ask for the chef’s special’s and then the courses start to arrive.  Starting with the first course, you are amazed!  It’s a 5 star feast for the literary senses.

Author Amir Lane takes the reader into Brazil’s Pantanal, a little known but enormous and ecologically rich wetland the size of Washington State,  We’re dropped immediately into the life of Lenna and her family’s struggling ranch, we feel the heat, hear the calls of the wildlife all around us, feel the eyes of the caimans lurking just above the waterline…and we’re there.  We’re feasting on the delicious storyline of strong characters in a loving family under threat in a wild environment also perpetually under threat itself.  It’s a narrative meal you can’t resist!  And won’t!

The power, the joy. the sheer vibrancy of the majority of this novel is incredible.  There you are, eating a remarkable rich and delicious eight course meal.  And for six or  seven courses you’re treated to a aromatic banquet of layered flavors….adventure, Mayan religion and mythology, suspense, and high action mixed with familial love and the power of the land. Oh my.
Then comes the seventh and eighth courses.

And it appears that a change has happened in the kitchen and a new chef has taken over because otherwise I can’t account for the utter lack of energy or color or  lack of connection to anything that went before or just plain  no substance at all. What a debacle!  It’s as if the head chef said, “hey, not feeling how to finish up the rest of the meal, so I’m leaving, ciao”.  The owners, in a panic took some hapless stranger off the street to finish remaining dishes and dinner saying this was the plan now carry on.  Smh! Inset every astonished, gobsmacked emoji you can think of here!  Because what happens to this story next is unthinkable.  You  wouldn’t even recognize it as being anywhere near the same novel if I had scattered all the pages like a puzzle and asked you to piece them together again.

I’m going my reasons under one spoiler section for those that are interested because, again, irritated beyond belief that anyone does that to their own story.    If you don’t have an ending, Well, then….You don’t rush to publish you wait until you have the ending the book and your characters deserve.  But you don’t tack on a colorless, lifeless, absurd, and frankly, meaningless ending as was done here.    You had a 5 stars book that ended at a 2.   I could cry at the loss of promise here.

So here’s some spoilers for those that  are interested:

Anyhow to finish with my metaphor.  Here we are at the table and the check comes. We leave a tip.  Not the waiter’s fault.  But ask to  speak to the manager or owner.  We  politely explain that we lost ourselves in the lushness and variety of the majority of the dinner.  It exceeded our expectations.  But all was lost at the end when the final dishes destroyed our taste buds and made us forget exactly why we thought everything before was so wonderful.  Instead we are leaving disappointed and rather sad.  And won’t be returning.

Cover by Combs.  Great cover. Love all the elements and the color combination.