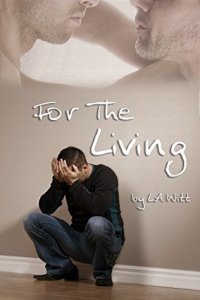 I love rereleases when it is a one I somehow missed. I am a fan of LA Witt, so I was eager to read this.
What I loved the most was that it was different. One man struggling with his sexual identity and then forced to grieve a wife that deserved more. And a mortician who he met while burying his wife. You don’t read about that everyday.
The pain Jay felt was so real. First the pain of knowing he was gay, but how to tell his wife about it. Because he did love her, he just wasn’t in love with her. And then to lose her so suddenly. No closure, no truth, no nothing. She was just gone. He doesn’t know how to deal with all of that at once. And then Scott offers a friendly ear and shoulder. Yes, he is a funeral director so comforting people is a bit in the job description. But he also knows what it is like to struggle to come out.
Scott was a bit too perfect for me. So sympathetic and understanding. Most of the time he wasn’t taking his own feelings into consideration. And then when he was upset, it was like he flipped a switch. 90% way too saintly and 10% why are you being such a jerk? I found it almost funny that he is this professional, clean cut funeral director/mortician, but he is covered in tattoos you only see when his shirt is off. Like she was saying “see? he’s a bad boy!”.
I liked Jay though. I felt like his struggle was real. Oddly, even though his parents were close to him, they didn’t seem to have too much in the story. You would think that their son losing his wife would bring them forward more. Having him struggle with that would have been very realistic. Instead he leans heavily on Scott.
So, yes, it was a good story. I liked it. I just didn’t love it. Assuming that because this is a rerelease it was also re-edited. It really needed more though.
Cover art Lori Witt.  Wonderful cover.  Love the composition.