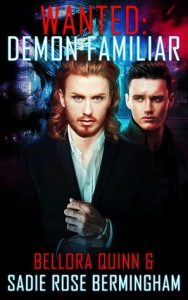 Sometimes when you don’t know what you want, life gives you what you need.

When Neil Markovic witnesses the murder of his mother by Bone Men his world is thrown into turmoil. On the run from the assassins that killed her, his sorcerer father and the police, Neil finds help in the form of a tall half fae alchemist named Malachai. Mal seems more accepting than most of Neil’s demon bloodline, but curiously immune to his charms.

Malachai Valentine, disgraced scion of a noble Leprechaun clan, back in the Old Country, is happy living as an anonymous scrap dealer. Using his talent for alchemy to make fuel and potions, most days he doesn’t even think of his ruinous past. When a scared young man with a fancy car crashes into his life, at first, Mal thinks he can do without the hassle. But as Neil begins to get under his skin, Mal starts to reassess his hopes and ambitions.

Harassed by megalomaniac fae and stalked by sorcerous killers at every turn, Malachai and Neil must fight to be free, and to find what they both truly wanted.

When I finished Demon Familiar, I just wanted to do a little teeth gnashing.  Where, oh, where, was the next book in this series? Oh, wait…not to be published until August 2018.  Let the wails commence.  That’s because at the end of this gritty, sometimes tender, occasionally horrific but always, always riveting story I wanted nothing more than for it (and this couple and other characters) to continue.

Demon Familiar by Bellora Quinn and Sadie Rose Bermingham is the first in their new Wanted series and as such left some fairly large mysteries looming large while the overall arc for this story was resolved.  Yes, I was completely satisfied yet I knew just as Mal and Neil’s relationship was going to grow and deepen so would their journey that would continue to explain each of their back histories.  And I can’t wait.

The authors were masters at the tease here.

They gave us intriguing (and so often appalling hints as to events in Mal’s past and elements from Neil’s, that had our own speculations leaning from the tortuous to the downright insane.  And probably being right.  On top of that, they weave Gaelic mythology into an alternate city of  Detroit that’s just familiar enough to be both alien and mundane.  What a marvelous location.  It felt like a character itself with its atmosphere and vivid descriptions.

I loved the way the authors carefully built the relationship between Mal and Neil, while exposing both characters to the readers (alternating pov).  This is a big cast, full of fae, gremlins, demons, and more.  Not high fantasy but more urban fantasy,  the gritty underbelly of society for many.  Think pimps, drugs, whores and thieves.  And with that comes non-con for a section.  It’s only a section but its there and I expect to see it again for reasons I will not go into in the upcoming stories.  Maybe wrong but I don’t think so.  People and beings are in part a commodity in certain sections of town here.

They have just started their world building and it’s only going to get better because the foundation is already rock solid.

I thought it ended a little too soon but I’m hoping the next book picks up directly after the events of this one.  My mind is buzzing over a few clues here and there, and the mysteries left unsolved.  I want more of these characters and more of Mal and Neil.  I want their backstories and I want their future.  I can’t wait for this series to go forward.

Pick this one up which I highly recommend and join me in waiting for the next one to roll out.

Cover art: Posh Gosh.  The red head works for Mal but in no way does the dark haired character work for the incandescent youth Neil.