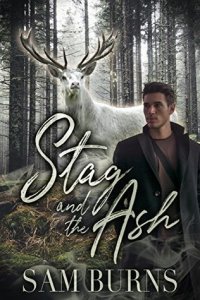 Jesse Hunter is finally trying to be an adult, but still feels like an act. His place on the town council is a sham. He’s rarely called on to do anything. His boyfriend is grieving the loss of his mother, and while everyone seems to think he’s doing a great job caring for Sean, Jesse feels like he’s more of a distraction than a real help.

March is shaping up to be a bad month. First, random chance leads him to the realization that the town’s recent trouble is his fault. Then new werewolves come into town, and it turns out they’re also Jesse’s responsibility. He feels like he may be at his breaking point, and he doesn’t want to drag his friends and loved ones down with him. But how will he handle it alone?

In “Stag and Ash” we’re back to my favourite couple of the series: Sean and Jesse. Once again, this book is not a stand alone. You have to read the previous books to understand enjoy this book.

I really like both Jesse and Sean and their relationship dynamic. They’re so wonderful together. Neither of them is perfect and Sean is definitely going through a rough time after his mother’s death.

Jesse has to face his own demons and he grows while doing so. I think I actually like him even more now than I did after their first book.

We also get some more world building and learn some interesting details. I really enjoyed those parts.

Overall, this book is a quick, fun read. I finished it in less than 24 hours and found myself well entertained.

But just like the rest of the series, “Stag and Ash” is a bit short and was over too soon. It kind of feels like the books always finish before things can get really going. But it’s better than part four, which was my least favourite so far. I really hope the next books will be longer again.

The cover by Melanie Farlow fits the overall look of the entire series. It’s not my favourite but it’s okay.