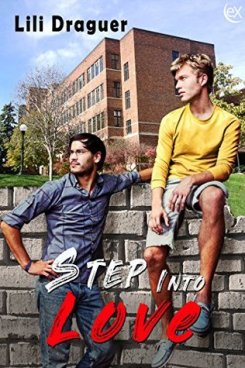 Colton Johnson has successfully buried the crazy attraction he feels for his younger stepbrother for so long, he can pretend he’s not attracted to Asher at all. Graduating and dealing with the daily chore that is his bipolar disorder are the only two things on his mind. Then Colton makes the impulsive decision to accept his stepmother’s invitation to visit. What Colton doesn’t know is that Asher has been making plans.

With boundless enthusiasm, good looks, and endless amounts of persistence Asher Miller usually gets what he wants. The one plan that hasn’t worked out for him is falling in love. He never thought his off limits, damaged, hot-as-sin stepbrother would be the one to catch his heart. For years Asher has squashed down his forbidden desire but now he’s eighteen, he’s following Colton’s footsteps to college…and all bets are off. It’s time to take the steps that will seduce Colton into love.

I enjoyed this story and liked that they gave a glimpse of what a relationship can be life with someone who is bi-polar.  As my spouse is it hits close to home for me, there are times that they can never think anything positive and it can be a struggle.  Colton has worked hard to keep his hand off his step brother and when Asher starts to come onto him it sends him running.  Asher knows what he wants and isn’t scared to go for it, even if he has to push a little bit.

I liked both of these characters.  Asher is quite mature for his age and the openness he has with his mom helps the situation also.  Colton has to deal with a jerk of a father while trying to succeed at school, when Asher stands up to his father it gives him the chance to see that there is someone who would want to be with him.  We get to see how both of them feel and their reactions to what the other does.

The cover art by Latricia Waters is cute and gives a nice visual of the characters.