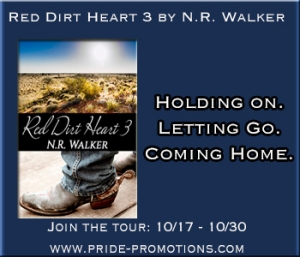 N. R. Walker’s Red Dirt Heart series has turned out to be one of my latest obsessions.  I love every part of this series from the location to the characters and even the animals you meet along the way.  Now N.R. Walker has released the third installment, Red Dirt Heart 3.  Here is your first look at this must read series and book.  And don’t forget to enter the contest too.  Who doesn’t want a stuffed wombat of their own or a copy of this story?

I was thrilled to have a chance to “talk” to N.R. Walker, ask  a bunch of questions about the series, LGBTQ rights in Australia, and all things Aussie in general. It was a great interview. Here’s your chance to get to know this fabulous author a little bit better:

Q  I love this series and characters.  Where did the inspiration come from for Charlie and Travis?

N. R. Walker:  Aw, thank you so much! I had seen some pictures from an R.M. Williams clothing catalogue and just knew they were these boys. It fit them perfectly. I love writing these Australian Outback characters. I grew up in regional Australia (not the Outback) so I can relate to the people in these books. Every character is a little slice of someone I’ve known in real life.

Q  Since there is a real “Sutton Station”, have you visited it and experienced the red dirt for yourself?

N. R. Walker:  I did base Sutton Station on a real, working station in the Outback. You can see it here .  Though you’ll need to zoom riiiiiiight in. I based my fictional property on this location, not size.

I have been through the Outback, many years ago. Though it’s not a place that leaves you in a hurry. And I will say, the fine red dirt gets into everything. Every. Thing. Lol

I have climbed Uluru (back when it was known as Ayers Rock and it was climbable) and visited Kings Canyon. Quite a remarkable place.

Q .  The scenes with Matilda and now Nugget are adorable and yet so real.  Did you visit or have any experience with animal rehabilitation facilities for kangaroos and wombats?

N. R. Walker: Not in the rehab facilities as such, but we had a pet kangaroo when we were kids. Growing up in a small rural Australian town, caring for sick or injured wildlife is common. I did a little research on proper care of joeys (both kangaroo and wombat) but most of what I wrote was just what I knew.

Q  Is there a set number of stories for this series or is it open ended?

N. R. Walker: There will be 4. I’m almost done writing book number four now, and I expect it to be released early 2015. I have no plans for more Charlie and Travis after that, but I do like to never say never. 😉

Q.  The current state of equality in Australia seems to go along the lines of state rights in the US regarding marriage and adoption. There is no gay adoption in the Northern Territory where the Sutton Station resides or gay marriage in Australia. Will that play out in the stories to come?

N. R. Walker:  It is something the boys discuss and encounter in book 4. I haven’t actually written that part yet, so I can’t say for certain exactly what will come of it, but yes, it is in the series.

Q. How do you feel about the status of LGBTQ rights in your country and do you feel stories such as yours help to bring greater acceptance? Australia has one of the biggest gay Pride events in the world.  Have you ever been?

N. R. Walker: I went to Sydney Mardi Gras a LONG time ago, and I’ve only been once. I’d love to get there again.

I hate that Australia is so behind in equality. I think we will need a change of Prime Minister before we see any move forward. Our current PM is a giant setback for a lot equality in this country.

I’d like to think my stories bring greater acceptance, and I’ve had people write to me and tell me they appreciate my ‘voice’ which has been lovely. I figure if I can make acceptance and understanding start in my house and bring my kids up to believe as such, then I’ve done my job.

Q.  Your favorite place you would want tourists to see in Australia?  What would you want them to experience and take away with them?

N. R. Walker: Oh, wow. There really is too much to see in Australia. LOL We have deserts, rainforests, coral reefs, beautiful cities and rolling country sides. I love it all for different reasons. I’ve seen a lot of Australia, and I’d have to suggest that people get off the tourist tracks and meet some genuine Aussies.

Q.  I love that we experience two national views that are so similar in some respects with Charlie and Travis.  It is a wonderful aspect to this story that we get the “insiders” and “outsiders” perspective on life on the farm and the Northern Territory.  Did you plan that from the beginning?

N. R. Walker:  It wasn’t really planned, but I have LOVED writing the differences between Aussies and Americans. I have a good friend in California who I talk to all the time and we quite often joke at the differences between us, even though we both speak English. And being an Aussie who has written mostly American characters for years, it’s been fun having the characters bicker about different word uses. I think it gives them a sense of realism.

I have loved writing in Australian English. And funnily enough, I have found myself having to change words back to “Australian” because I’m so used to writing “American.”

Q.  What would be a Australian comfort food?

N. R. Walker:  Well, that can vary from house to house given we’re such a diverse country. But I’m a seventh or eighth (not sure exactly) generation Aussie. My ancestors came out here from Ireland with the convicts LOL. So a “comfort food” for me would be maybe corned beef and béchamel sauce, or a pot of tea and something sweet like a cake or slice.

Q.  If you have a favorite childhood book, what was it and how did it impact your writing. today.

N. R. Walker:  I loved The Little Prince by Antoine de Saint-Exupéry. I’m not sure it impacted my writing, just my love of reading

Q.  What’s next for the Red Dirt Heart series and N. R. Walker?

N. R. Walker:  RDH4 is next. I would also like to get a short Christmas story out, and I have my next novel planned/outlined in my head. It’s a sci fi-ish vamp story which is not normally thing but these characters are not letting me get out of writing it. I will look at and aim to have between 6-8 releases next year, but looking at my very blank 2015 yearly planner, it feels a little ambitious.

Thanks for having me here today. Great questions

STRW:  Thanks for the great interview.  It’s been a joy.  Now for all you readers, here is a look at Red Dirt Heart 3!

Author Bio: Who am I?

I am many things: a mother, a wife, a sister, a writer.

I have pretty, pretty boys who live in my head, who don’t let me sleep at night unless I give them life with words.
I like it when they do dirty, dirty things… but I like it even more when they fall in love.

I used to think having people in my head talking to me was weird, until one day I happened across other writers who told me it was normal.

I’ve been writing ever since… 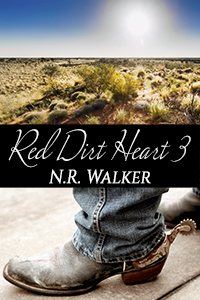 Life for Charlie Sutton has never been better, or busier. With Travis now a permanent fixture of Sutton Station, a permanent fixture at Charlie’s side, Charlie’s convinced he couldn’t do anything on his ever-growing to-do list without him.  He can run a multimillion dollar cattle business, finish his degree, try and further the local beef industry, deal with staff issues, Ma’s failing health, and an attention-demanding wombat. He can even deal with an unexpected visitor and some shattering news.   He can deal with it all, as long as he has Travis.  But what happens when he doesn’t?  Red Dirt Heart 3 is the story of Charlie Sutton finally realizing he can be the man Travis Craig deserves, even if he doesn’t have Travis. It’s a story of love, family, holding on, letting go and coming home.

We climbed into the ute and Travis drove, only mumbling under his breath once or twice about what side of the road he was on. I thought we were headed to find something to eat, but he pulled up at a pet store.

“What are we doing?”

“You’ll see,” was all he said as he was getting out.

I followed him into the pet shop, past the puppies, fish and birds down to the kennels and produce. When he stopped at cat beds, I shook my head. “Oh, no no no. We’re not getting a cat. We used to have one, it lived in the shed and the bloody thing was feral.”

He didn’t even look at me. “It’s not for a cat, Charlie.” He picked up a cushion-box looking thing with a hole in the front. The label called it a cat igloo. “It’s for your damn wombat.”

He pushed Nugget’s new bed into my chest. “So he sleeps in his bed, not ours.”

A sales guy, about eighteen years old, walked up and was looking at us funny. He probably just heard what Travis said, and I didn’t care. I just shrugged, guessin’ that I’d come a long way in the last six months. “How did I know he’d think it was playtime?”

Travis sighed and turned to the sales assistant. “Do you have any feed pellets for wombats?”

He raised his eyebrows. “Wombats?”

Travis took a god-fucking-help-me breath. “About a year old, pain in the arse, stubborn as hell, boot-chewin’, gets into everything type of wombat.” 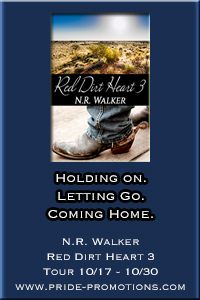 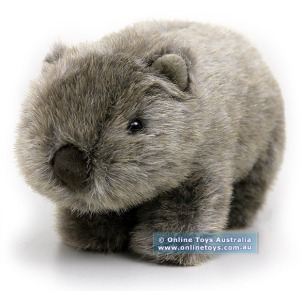 Contest: Rafflecopter Prize: One of 3 e-copies of Red Dirt Heart 3 or a stuffed wombat toy! (I want that toy!). So must be 18 years of age or older. Use the Rafflecopter link provided to enter and for all additional contest details. Did I say I wanted that toy? sigh. But only you all can enter…