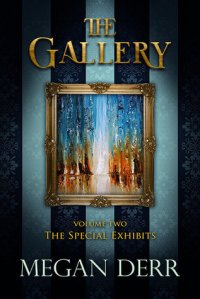 Welcome to the Gallery, where you can admire hundreds of beautiful paintings, and perhaps find what you didn’t know you were looking for…

In these rooms you will find the Special Exhibits, those paintings which remain at the Gallery only temporarily. Their time here can range from weeks to decades—even centuries. But they do eventually leave, so admire while you can. The subjects of these paintings come from all walks of life, from lonely individuals seeking respite while they await their true love, all the way to dangerous beings captured by the Curator or given to him for safekeeping until such time as they can be trusted out in the world again.

Today’s featured Special Exhibits include: The Assassin, about a killer on the run and a painting of a man who once chose surrender over murder; The Lion and the Mouse, where a grouchy accountant escapes the snow only to find himself on a beach with an ancient gladiator; The Gargoyle is a beautiful, erotic statue not for the faint of heart; Shapeless brings a new and rather unique guest to the gallery when he is bequeathed to Silenus by a dead alchemist; and finally, in Fallen Soldier, a man escaping his kidnappers hides behind a statue of an unusual being who once betrayed a dying kingdom…

I absolutely loved the first book in this series,The Gallery: The Permanent Collection.  Derr gave us a wonderful concept, than an complicated buildup introduction to the owner of the Gallery, the Lord of Satyrs, and a terrific foundation of world building. Just magical.  So I was really looking forward to the sequel.  We had a brief peek at this “area” of the  Gallery and small explanation but no more.

Now the The Special Exhibits are on display.  And depending upon the “art work” the very nature of this portion of The Gallery made it less….magical or something.  You see all the inhabitants here are only temporary.  The amount of time they have spent living inside their “art” can be a thousand years to decades.  It depends upon the person they are waiting to find them.   And what happens after that.   Which is that they leave the paintings/sculptures etc. (actually small bubble universes) to join that one they’ve been waiting all this time for.

Now in the Permanent Gallery, that person joins their fated one within the art work.  Makes sense because again.  That art work is really a contained universe.

But here the inhabitants, such as the Lion, a Gladiator who had never lost a battle, steps out of his painting into our century to become a…bouncer at a leather club with his sex club accountant boyfriend leading him?  For me that was just nonsensical.  Talk about culture shock.  A fracas at the door of a local club  is put down by a man using a net and trident? That would bring in the media.Yes, yes, I know that wouldn’t happen but that is the picture that sprung to mind.  How do all these beings face life and relationships in our world and with our technology?  Hard to answer in 66 pages to my satisfaction. As each long-term being left it’s temporary holding place in The Gallery, I just couldn’t help but think…what happens next to them?  What about the culture adjustment?  Where do the couples go? None of these questions really arise in The Permanent Collection for obvious reasons.  That book just had more depth to it imo.

The only ones I wasn’t worried about particularly, was the  Mist.  Very imaginative.  And playful. Plus the Merperson/Octopii being and the human mate. Yes, there is tentacle sex. Just a fyi.  Their ending seemed rather wonderful although I  still wanted to know  what happened next to them as well.  Especially as they were the end story to  The Special Exhibits, with the notation that another would soon replace them.  Yes, this gallery is one constant turnover.

Plus there is only a brief mention of the demon problems here that were such a major element in the first story.  All in all, this is a lighter short story collection without the depth of the first.  I would have loved to have known more about what happens next for many of the couples, a question that arises out of the nature of their temporary status in the The Gallery.

We have two books.  I wonder where Megan Derr is going next.  Will we find out more about the demons and the humans who have brought this problem into the world?  What will happen to the Gallery and it’s owner next?

I can hardly wait.

Love this series. So will you.

Cover art by Aisha Akeju is beautiful, compelling and perfect for the story and cover.

Author’s Note: Two of these stories were freebies on my website. They have been edited for re-release, and received minor changes, but nothing major.

Welcome to the Gallery, where powerful beings enjoy peace, quiet, and the company of each other, where they are free to love as they choose, be it one, many, or anything in between.

The Permanent Collection comprises those paintings which never leave the Gallery. The beings within these paintings have bargained with the Curator to stay on forever in return for gifting him their powers, resources, or knowledge. They help the Curator in running the Gallery, and provide sustenance for the Curator.

Today’s featured pieces include: The Assistant, about a lonely, misunderstood young man and the unusual new job he is offered by the mysterious curator; The Tycoon is about a rough and powerful man who went missing several years ago, and has every intention of remaining so; Three Kings once walked away from their kingdoms, and now spend their days with each other; The Bastard Son is about a man who once fled betrayal and heartache, and now uses his deadly skills and famous sword to defend the Gallery. And in The Demon Slayer, an angel arrives to find the gallery under attack, and soon one demon is slain while another falls…

I have always loved this concept.  The idea of pictures actually being alive and here Megan Derr carries it into an unusual gallery.  This is the first Collection with another installment in the works.  This one introduces us to Rex upon his entrance into the Gallery.  And as he starts to understand it’s peculiarities and occupants, so do we.  It’s also presided over by one very special owner.

Rex, who’s identity is key here becomes a thread that ties all the paintings together, along with its owner.  It’s a unifying touch that pulls all the stories together as a whole, as well as creates a foundation for the set to follow.  I truly loved Rex and wished we knew more of his background.  Perhaps that’s coming still in the Semi-permanent Collection Gallery of Stories to follow (the one that he originally played a part in).

Each painting forms very quick tales of passion and love, flashes of depth (a man alone in a tower) to a twist  on King Arthur to three Kings…all different in taste.  I wanted more of some, not of others.  But with another book to come and an overall arc appearing, I’m hopeful that I’ll see more of these occupants as well.

This us just such a juicy novella…it wets your appetite for more.  More of these fascinating paintings, more of the owner and Rex of course.  And more from Megan Derr.  You just can’t go wrong.

Cover art:  Aisha Akeju.  Not a fan.  Most of the paintings in the gallery are formal and this should have reflected that.

Author’s Note: A few of these stories were freebies on my website. All have been edited for re-release and some, like The Tycoon and Three Kings, have undergone significant changes.