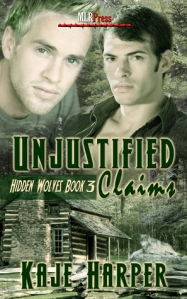 Having run away from his home pack in Michigan, Brandt Davis spends his time in his wolf form. Winding up following a wolf pack in Minnesota, he stumbles upon an injured man, Ethan Sjulstad. Ethan, having tumbled off a cliff, thinks he must be suffering from delusions when a large wolf and a handsome, naked man come to help. Together, they must try to heal each others’ wounds, both physical and emotional.

This is the third book (with two intervening novellas) of the Hidden Wolves series by Kaje Harper. While it could be read as a stand-alone, it is recommended you read the other books in order to pick up on some of the finer details of the plot lines.

Brandt, a werewolf from Michigan, travels west after fleeing from his home pack after his stash of gay porn is found by his alpha. Spending his time in his wolf form to try to forget his troubles, he follows a pack of wolves in the Boundary Water area of Minnesota. Hearing a scream, he goes to investigates. He finds man with a tree branch through his leg. The man tries to scare the wolf away to no avail. The wolf then brings the man his backpack, which had fallen out of reach. Seeing the man struggle, Brandt decides to shift and help the man in his human form.

Ethan, hiking to get his mind away from having his motel vandalized by homophobes, believes he must be out of his mind with delusion when first a large wolf, then a naked man come to his rescue. As Brandt helps get Ethan to safety, the two talk as to how each of them wound up in their situations. After successfully getting help for Ethan, Brandt decides to help Ethan out getting his hotel into shape while he is recovering from his injuries. The two begin to grow closer during the process.

I loved the interplay between the two main characters. Having meet not in the best of circumstances, they help each other deal with their problems. Brandt struggles with a particular fetish that he favors. Ethan shows his that it is not only alright but encourages Brandt. Ethan’s spying is understood considering that Brandt is trying to escape from a “cult” that dislikes gay members. Ethan only wants to protect the man he is growing to love.

I also enjoyed visits from Simon and Paul along with Aaron and Zach, the main characters in the previous two books as well as Paul and Megan who are spunky human mates in this little werewolf pack.  I would  recommend this story and the series, but make sure you read them in the order they were written.

The cover art by Winterheart Design has one of the cabins of Ethan’s motel with the images of Ethan and Brandt above it. The models are perfect depictions of what I would think the couple would look like. It also fits in with the motif of the previous book’s covers.