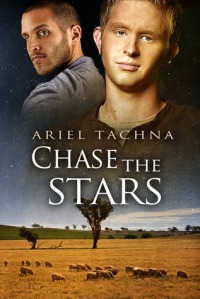 Chris Simms and his brother just happened to be in the wrong place and at the wrong time and now Chris was getting the beating of his life  by a gang of homophobic thugs.  His brother, Seth, runs off to find help and the jackaroos who return to intervene and take him to the hospital end up changing their lives forever.  One of the men to stop his attackers happens to be Macklin Armstrong who along with his partner Caine Neiheisal, offer Chris a job  and both brothers a place to live on Lang Downs, their sheep station. Chris realizes how badly he needs this place for himself to heal and for his brother’s safety but it is so hard for Chris to trust other people, especially with his history.

Jackaroo Jesse Harris is gay and quietly so as he has seen more than his share of homophobia on other sheep stations he has worked for.  Having a station manager and a station owner  who are not only gay but partners is taking some getting used to, so is not having to hide his sexuality as Jesse has always done before.  Then injured Chris Simms arrives at the station with his brother and Jesse’s offer to help Chris adjust to station life turns into mutual attraction between the two men and then so much more.  But Chris’ emotional state is in turmoil.  He feels guilty for not pulling his own weight on the station because of his injuries and ignorance. And so is being there for his brother as Seth adjusts to a life so different in every  respect from the one they were used to.  Can he and Seth make a home on Lang Downs and be happy?  And what about Jesse?  Most jackaroos are nomadic by nature, roaming from one sheep station job to another from season to season.  Would Jesse be able to make a commitment to Chris, a family, and life lived permanently at Lang Downs?  Impermanence is all Jesse has known but when he falls in love with Chris, he realizes in a panic that returning that love means a fundamental change in his life.  Now only if he can find the courage to accept that.

Chase The Stars is the sequel to Inherit The Sky, the first Lang Downs novel and I certainly hope this is not the last visit to the men and the Lang Down sheep station I have come to love.  Once more we are pulled into the world of wide open spaces of New South Wales and quiet reserved men who make their living off the land.  Caine Neiheisel and his partner, Macklin Armstrong are featured here just as much as Chris Simms and Jesse Harris to my utter joy.  Caine and Macklin have had six months to adjust to their new love and partnership.  Lang Downs too is having  its own  adjustments to make to having an openly gay owner and manager.  As Caine and Macklin work to create a successful and accepting work place, they also are still discovering new things about themselves as they  learn to trust each other and lean completely upon the other man fpr their emotional support. Work schedules are tight on Lang Downs where they are shorthanded as not all the seasonal jackaroos will accept working with gay men and Macklin is still keeping secrets from Caine about his history to Caine’s frustration.  Nothing ever comes quickly and there is work to be  done, even on relationships, if all are to succeed.

Into this evolving mixture of men and relationships, Tachna adds the Simms brothers, Chris and Seth who are woefully in need of sanctuary, a home and support.  At Lang Downs, they find all that and more as Caine and Macklin provide a needed portrait of two gay men who love each other and successfully work together.  Chris and his brother Seth were tossed out of their home by their stepfather after their mother died  and Chris was having a hard time just getting them food and shelter on a day to day basis.  With Caine and Macklin making them feel at home, Chris can finally get past a state of stress and starts to think about a future for them both.  Chris Simms and his brother, Seth are wonderful characters and work perfectly within the established framework Ariel Tachna has created.  We have already gotten a real understanding of the flow and pace of life on a sheep station, we anticipate the seasonal duties the jackaroos have before them as much as they do, and we sympathize with Chris and Seth’s feelings as outsiders when they first arrive at Lang Downs.  But then the station’s strangeness starts to wear off as Chris and Seth find their way into the rhythm of life at Lang Downs. Seth settles down as he starts the School of the Air with the other children and finds an outlet for his mechanical nature in helping to work on the engines, the people around him making him feel like family.  But it is Chris who we empathize with the most.  He is the one beaten for his sexuality, he is the one who has shouldered all the responsibility for his brother and we breathe a sigh of relief and joy as Chris learns to trust in his situation and the men around him.  Chris’ vulnerability and sensitive nature engages our affections from the beginning and we root for him to succeed and find happiness just as Caine and Macklin have.

The character of Jesse Harris brings a wonderful contrast to Chris Simms and Macklin Armstrong.  Jesse Harris is more typical of the seasonal jackaroos who work the sheep stations, never settling at one place for long.  These men have learned to be self sufficient and hard, reserved and used to isolation.  Still Jesse’s homosexuality sets him apart from the others and the high standards that Macklin and Caine set are not only new but bring the potential for more into a future Jesse had never thought of for himself.  Watching Jesse change and adapt to new thoughts and feelings is like watching the parched ground soak up the rain after a steady shower, the cracks fill up and finally disappear as the ground repairs itself.  We thrill to watch that evolution happen within Jesse as well.

And that’s really how this book and Inherit The Sky feel to me.  They are as much about a life lived as close to nature and as in tune with the seasons as one can be.  Changes in emotions and thoughts are measured as incrementally as changes in the land around them.  The wind blows a little  colder, the rains and sleet pour down upon men and sheep equally.  And life is slow until the threat of dingos appears and then the rush to face the threats is quick and fierce as the storms themselves. There is the calm enjoyment of the beauty of the outback and the clear night skies contrasted with the life and death nature of the floods in the rainy season.  This is a novel that spreads out before you in as elemental and  earthy manner as the land itself.  We are made to see an Australian night sky ablaze with stars, and feel the cold seep into bones of the men checking the fence line and what a gift that turns out to be.  It is a treasure when an author can meld you seamlessly into their world, make you a part of  their  characters lives so completely that you hurt and laugh when they do.  Ariel Tachna did that with Inherit The Sky and does it again here with Chase The Stars.

Easing back into the world of Lang Downs was like revisiting with old friends and meeting new ones as well.  I love watching the changes in the lives of the characters I have come to love, whether the permutations inch forward or flow fast like a stream.  I hope that Ariel Tachna  brings us back here again, to see what changes time has brought and to whom Lang Downs has given sanctuary and home.  Until then, I will be picking these two books up again and again to read and remember.

Cover by Anne Cain is lovely and perfect for the book and the story within.