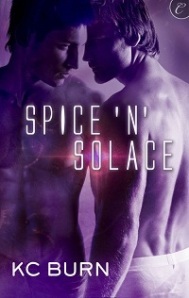 Kaz Deinos knows what it feels to be an outsider, he’s been one all his life.  When his family cast him out at an early age due to his sexuality, he lived in the marginal sections of the space station making his living any way he could.  Now he is the owner of one of the only male oriented brothels on the station and he has worked hard to make sure the sex workers in his brothel are taken care of, paid well and never harassed by any client.  It has made him wealthy and his workers some of the most sought after by people of every station, including the most influential and important government figures.  But lately someone is trying to sabotage his business.  There have been rumors of illness at his place and several of his workers  have been ambushed and hurt.  When his business is placed in isolation due to another rumored sickness, Kaz must figure out what to do when his most famous client  has requested a escort for the evening and none can leave the brothel.

Jathan One Moon is one of the galaxies most famous negotiator as was his father before him.  His father negotiated the treaty that ended the war between the Ankylos and the human race.  A treaty that has to be renegotiated once a year, this time by him.  In addition to the treaty, Jathan One Moon is under pressure to  marry and have an heir to take over from him later in life.  But Jathan is gay and not inclined to satisfy the demands he marry.  Instead he is looking to ease some of his tension by a visit from escort from the brothel owned by Kaz Deinos.  While  Jathan has never met the man, his escorts are the best in the business and he is looking forward to this evening.

When Kaz goes over to Jathan’s suite to let him know that there will be a delay for an escort, he is mistaken for one by Jathan himself.  Kaz takes one look at Jathan One Moon and does something he has never done before, substitutes himself in his escorts place.  One night of passion turns into a week as the negotiations continue.  And both men are wondering how they are going to deal with being separated at the end, as their meetings are less and less about just a sexual connection and more about love.

I read and reviewed the second book in the series, Alien ‘n’ Outlaw, first and I am sorry I did that as the additional exposition you get here makes the second book much clearer, especially concerning the outbreak of the war between the races and why the mineral is so important to  Ankylos. Lesson learned.

That said, I enjoyed reading this book just as much as I did  Alien ‘n’ Outlaw.  Spice ‘n’ Solice introduces us to all the characters we meet in the second with one exception, and the author’s gift of giving the reader realistic characters and backgrounds continues here.  Kaz is beautiful and tough as he has had to be growning up in his religious, conservative family.  Only now is homosexuality being accepted on some of the more  traditional human outposts and Kaz has had to work hard to get his type of brothel and sex worker accepted and respected.  But we also get the idea that the isolation Kaz lives in it also a form of protection against emotional pain and the prospect of love.  Jathan One Moon is Kaz’s equal in everything but background and Burn is sure to make it obvious that their relationship may start off based in sex but deepens based on mental equality and mutual respect.  Yes, there is a huge secret between them, but Kaz is quick to understand that he must be honest with Jathan no matter the consequences.

The Ankylos, the two tiered  race,  is here as well.  I thought the idea of the worker bee/royalty set up intriguing as well as their hive mentality and communication.  And while there is nothing especially “outer spacey” about the space station, the descriptions of a huge city geared around hospitality and the ships that visit are well done.

As I said before, there is also something kind of goofy and endearing about this series.  I just like it and hope KC Burn intends to continue to give us  more installments.  I, for one, will be lined up to get them.