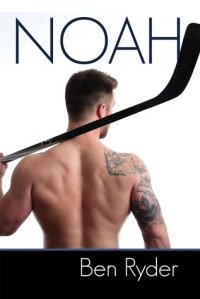 Callum Walker, rising software designer, is called upon by his boss to supervise the installation of the communication software program he designed for the new Toronto Maple Arena, a new contract won by his firm in London.  It meant that Callum was spending the next 16 weeks in Toronto, supervising the work and trouble shooting the installation.  It also put him directly into the path of Noah Lukas, the highly popular star player of the Toronto Bobcats professional hockey team.  For Callum, his attraction for Noah is instantaneous from the moment they meet in the Arena gym but he is sure the hockey player is straight and settles for Noah’s friendship no matter what Callum’s heart is saying.

Noah Lukas is at a crossroads in his career.  Noah’s contract is up shortly, and he is not sure if it will be renewed, if he will be traded or even if he will retire.  Noah is gay but deep in the closet as he is sure that would wreck his career on the ice, a profession he loves.  But since meeting Callum, he is finding it hard to remain in the closet, especially as his feelings of friendship start to turn into love.  When it comes down to a choice between love and career, which will come out the winner?

Again, Ben Ryder is a new author for me and  I throughly enjoyed my first story from him.   I have to admit I am a sucker for a gay hockey player so this got to me right from the start.  Noah Lukas is a star player on the cusp of momentous change, both personal and professional.   Noah is playing at the top of his profession but as a star player, his contract is also up for renewal.  The chances that he will be traded are as great as his chances to renew his contract or even retire if no one elects him to play for their team.  He is also lonely and tired of hiding his true nature.  Ryder makes us feel the stress of the situation and the emotions pressing down on Noah time and again.  It is a wonderful, compassionate characterization and it certainly helps to connect the reader with Noah.

Callum Walker is Noah’s opposite.  He is out and comfortable in his skin.  And while he doesn’t quite feel he is in Noah’s league, he feels secure in who he  is.  I liked the slow build in their relationship, including the fact that they became friends first.  It is a realistic touch and nicely done. The only other character that really figures into the story is a grating female one, Amy.  She is believable in her ambition and the tactics she uses to get ahead, not merely a witch for witches sake.

Ryder uses a very effective format in which to tell his story.  It opens in present time in London with Callum checking his smartphone, clearly waiting for a call.  And with each succeeding chapter, the time progresses through the day with Callum getting increasingly nervous as he waits. That is followed by a scene in Toronto and another flashback to their relationship.  The author smoothly flows from one time period to the other, progressing both stories neatly while pulling the reader into Callum’s ever deepening anxiety over the phone call that hasn’t come in.  So well done, this narrative hooked me in immediately.

My one quibble is a large one however, and that would be the ending.  In my opinion, it felt as though we never got one.  It just ends and the emotional satisfaction we were expecting from a well deserved resolution never comes, and we are left hanging.  I kept thinking that we were missing at least one chapter or just possibly an epilogue.  Nope, not there.  I don’t know if we can expect a sequel to tidy up all the loose ends that frayed the ending, but I certainly hope so.  Both the readers and the characters deserve it.  Still, I enjoyed the story enough to recommend Noah and look out for more from this author.

Run over now to Dreamspinner Press where it is being offered up free for the taking.  You won’t be sorry.

Cover Photograph by Scott Henrichsen Cover Design by Paul Richmond.  Hard to argue with a cover this sexy so I won’t.