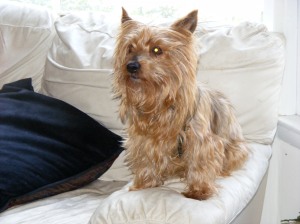 The hurt and pain is never lessened by the fact that it has been anticipated.  My mind told me it was coming and that my heart should have made the necessary adjustments.  But the heart and mind rarely occupy the same tracks on occasions like this and never has the hole in my heart felt so wide.

When you have had a wonderful friend and boon companion for 18 years like I did in Winston, my redoubtable Australian terrier, it often feels like they will be forever at your side, gazing up at you with adoration and often patience in their eyes.  Short legs and wagging shorter tail followed my footsteps everywhere, no matter the house or location.  Whenever the question was “where’s Winston?”, the answer was always “right there, behind  you” or “next to you” but always there.  He was there comforting me as we lost Seanan and Blaithin, our Irish Wolfhounds, and later Taz, the wonder lab. He mourned with me even as we celebrated their short lives with us. Winston has always been my one constant and now he is gone.  Where is my constant now?

Winston appeared in my life in a remarkable manner.  I was living near my folks at the time, on a treacherous winding country road.  My neighbors had 2 long haired Chihuahuas that their teenager was always letting outside (and just as promptly forgot).   So when I got a call from my dad saying he and the farmer across the way had found one of their dogs in the road and “oh by the way, would I  come and get him”, I was not surprised.  It was dark and rainy and how anyone saw the dog in the road was a wonder.  As it was they watched a car swerve to avoid hitting him before they got to him.  So I pulled on my rain gear and trundled on down the road and found the dog that became my Winston being held in Dad’s arms, definitely not a Chihuahua.

He was the most pathetic sight I had ever seen.  After telling Dad and Mr. Alnutt that this definitely wasn’t my neighbors dog, I took him home to get him dry and fed.  He looked up at me through the matted, dirty hair, trusting me completely.  He sighed and went to sleep as I carried him home.  The next day I phoned all the local Humane Societies and shelters to see if he was missing (he wasn’t) and to let them know I had him if anyone came looking.  Then we went off to my vet’s to  look for a chip and see what condition he was in.  My vet was shocked and couldn’t even get a needle through the matted coat to get a blood sample.  No chip and  time for a body shave and a bath.  Oh my, he was a bag of bones under all the fur.  The more we uncovered, the more grim the picture became.  He had been on his own for quite some time and was about 2 years old, all 7 pounds of him.  How he survived I will never know.  We  have coyotes, hawks, owls, and the occasional bobcat in the area, plus that awfully deadly road.  Horse farms and cornfields are everywhere, and the large tractors that are constantly mowing and tilling.  His survival was amazing.

At home, Winston was not at all cowed by the towering Irish Wolfhounds or loopy lab already in residence.  He let Seanan know immediately that he now ruled the roost and get off his couch, thank you very much.  If you have never seen a 200 pound Wolfhound gaze in fear at a small bag of bones and attitude, then you have really missed something.  I have never laughed so hard or fallen in love so quickly.  Soon I hated the sound of the phone ringing, sure that it would herald the loss of Winston (yes, he now had a name).  But the weeks turned into months, and the shelter said he was mine.  In Winston’s head, I just know it was the other way around, and he would have been right.

The 18 years went by so quickly.  True his coat went completely silver in the last year and his step a tad less jaunty but then so was mine.  And if he was no longer 15 pounds hefty, well that happens with age.  Cataracts slowly took his vision but his memory made navigation a snap. But this last year it became apparent that old age was finally making a huge difference.  Winston was sleeping more instead of barking his opinions at the world.  He even accepted the arrival of Kirby, the soft coated Wheaton with more than his usual grace.

Memorial Day brought a seizure and my heart started to ache with the realization that our time together was running out.  Each moment and every minute of the day become more treasured, as I desperately tried to stock up memories for the time when he left me.  As it did yesterday.

I know for some, the loss of a dog is not on the same scale as other major losses in life.  But for me, they have been my family, my heart, and a large part of my life.  In Winston’s case, 18 years of my life and his, twined together, inseparable.  And now the house seems so quiet and the loss of such a vital personality and loving presence is beyond painful.

His passing made me think of a quote by Patrician McConnell, it goes like this:

There’s a stone I had made for Luke at the top of the hill road, where the pasture opens wide and the setting sun highlights the words carved into its face. “That’ll do, Luke, that’ll do.” The words are said to working dogs all over the world when the chores are done and the flock is settled: “That’ll do dog, come home now, your work is done.” Luke’s work is done too. He took my heart and ran with it, and he’s running still, fast and strong, a piece of my heart bound up with his, forever.

Patricia McConnell
For the Love of a Dog

So after 18 years, that’ll do, Winston, that’ll do.  I will miss you and love you always.  Your work is done.

15 thoughts on “My Winston”