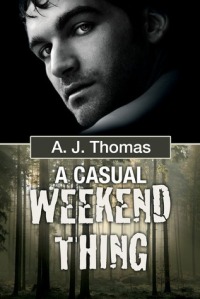 Doug Heavy Runner is the only member of the Baker County Sheriff’s Department that is also a member of the volunteer search and rescue team operating in his section of Montana.  So it is no surprise when a 911 call results in Doug hanging over the edge of a cliff, hauling up a body caught on ropes below him. The man is an apparent suicide but his suicide note and death will draw his younger brother to town, along with complications and clues that point to a criminal operating in town, something Doug Heavy Runner left Miami PD to get away from.  Doug lived an out lifestyle in Miami, but the undercover work and an abusive boyfriend sent him home to Elkin and life as a small town deputy and closeted gay.  Now one death may unravel Doug’s new life.

San Diego PD Detective Christopher Hayes is still trying to recover from a devastating gunshot wound that threatens to end his career when he gets a call from a small town coroner in Montana.  His older brother has committed suicide and Chris needs to identify the body and see to his brother’s estate.  The problem is that Chris hasn’t seen his brother in over 20 years by choice as his brother was a convicted pedophile who Chris thought was still in jail.

On the way to Elkin to attend to his brother’s remains, Chris stops in to a local gay bar,  hooks up with a Native American cop and a hot weekend of sex ensues.  Imagine both mens surprise when the suicide’s brother turns out to be Chris and the deputy in charge of the case is none other than his weekend hookup, Doug Heavy Runner.  When Chris’ brother’s house is burned to the ground and the cause is arson, all clues lead to another pedophile operating in the area.  The deeper they probe into the brother’s life, the wider the scope of the investigation.  Soon the FBI is involved and Chris’ partner from San Diego shows up, and everyone is second guessing themselves and each other as the case folds back to Elkin and its citizens. And all the while, Chris and Doug’s casual fling deepens and turns into something neither expects or can accept – love.

I was not expecting a book as complex and moving from the title, A Casual Weekend Thing.  A.J. Thomas has written a book with so many layers to it that I was continually amazed with each reveal and new element  she added to the overall picture.  This book is a police mystery, a cop romance, a character study, and just a grand read.

At the core of A Casual Weekend Thing are two damaged men, each a gay police officer whose back history has made them who they are today, two driven individuals who run from commitment and any relationship other than friendship or casual hookups.  Each is a runner, one by name and one by emotional need, a clever turn by the author.  Christopher Hayes is an ultrarunner, a rare breed of runner who pit their endurance against distances from 50 to 100 mile runs in extreme weather conditions.  Chris was told by his abusive brother to run for his life when he was 12 and run he did, never looking back.  Chris is still running, from his past, from his tenuous future on the force, and from all relationships, never fully trusting anyone.  In Christopher Hayes, Thomas has created an emotionally damaged man, who thinks he has coped with his past but in reality is in denial.  It is a wonderful characterization, multidimensional and realistic in every respect.

Doug Heavy Runner is Chris’ equal in complexity and pain.  In Doug, Thomas gives the reader a man who ran from his culture, that of a Salish-Kootenai Indian on a reservation where crime, poverty, and despair rule and very few escape.  Doug fled to Miami, to become a police officer and live an openly gay lifestyle, passing as a latino.  But the undercover work and abusive boyfriend combined to break him down until his path led him home to the reservation and the small town nearby.  Doug is running just like Chris, too afraid to trust himself in a relationship or to come out to the community.  Thomas balances these two men against each other’s past history even as the author starts them on the investigation that will hit close to home for both men.  Thomas manages to create not two but multiple realistic characters, including Chris’ partner, Ray, a man who was supposedly “straight” until he wasn’t, to Chris’ surprise.  Not once did I feel that any of these characters strayed into a less than authentic portrayal of a real person.  Some were repulsive, some sympathetic, and others incompetent, but always real.

Great characters were certainly a necessity given the complex, and densely layered plots that play out in this story.  Thomas takes the time to set up the situations for the events that follow.  It is a slow build that pulls in element after element, revealed to Chris, Doug and the reader in small increments.  As more facts are unearthed, a feeling of unease sets in.  Then we discover the truth of Chris’ relationship with his late brother, and the horror arrives.  That he treats it so unemotionally makes it worse.  The more clues are discovered, the more horrific and wider the investigation becomes, pulling in the FBI and Chris’ partner.  Thomas does a superlative job in creating a monstrous psychopath who eludes identification until close to the end.  And intertwined with this investigation, is the romance between Chris and Doug, a tenuous thing given each man’s trust issues and past history.

I have to admit I came so close to giving this story 5 stars.  I really wanted to.  But there were a few minor issues with police procedure as well as some actions on the part of Chris that had me shaking my head in incredulity.  I just don’t think a police officer of his experience and background would have committed the errors he did, given the clues he had at his finger tips.  I can’t say any more but when you read the book, you will recognize the areas I am talking about.  That, combined with a little rough transition at the beginning, kept A Casual Weekend Thing from being perfect.  But it sure came close.  It hooked me right from the beginning and keep me on the edge of the bed (so to speak) until the last page.

The end leaves us with a very realistic HFN and I think it needed it.  A HEA for Doug and Chris, considering the events they just emerged from would be just implausible and not in keeping with the characters Thomas was so careful in creating.  I can hope, however, that this will set them up to return in a future novel with another case to solve together.  Now that would be perfection.  Consider this book highly recommended.  I can’t wait to see what A.J. Thomas has for us next.

Cover Art by Brooke Albrecht.  I applaud the cover artist’s choice of model, although he looks far more Indian than Native American.  Also the woods below aren’t really in keeping with the landscape around that area of Montana.  I know, that’s really getting picky, isn’t it.  But they get the tone of the book right.

5 thoughts on “Review: A Casual Weekend Thing by A.J. Thomas”