Today we are lucky to have as our guest Kendall McKenna talking about her latest release, The Final Line (Recon Diaries #3).  To celebrate its release, we are giving away one copy of The Final Line and one copy of any other Recon Diaries title to a person who comments either today or tomorrow.  So don’t forget to leave a comment at the end of the post.  This is an incredible series and The Final Line is one of Scattered Thoughts Best Books of the Year: 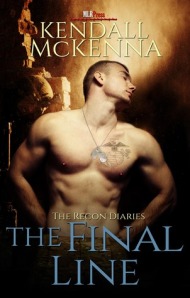 Hello! My name is Kendall McKenna and I write M/M Erotic Romance novels and novellas. I’m going to talk about my U.S. Marine characters, and give away some free e-books, so let’s have some fun! Thanks to everyone for joining me today! On July 4th, The Final Line, my fifth novel – #3 in The Recon Diaries – was released to great reviews and a lot of excitement. This is the story of Corey Yarwood, who readers have watched grow up during the first two books in the series. Corey falls in love, has some hot sex, but also struggles with Post Traumatic Stress. That’s one of the hallmarks of The Recon Diaries, a hot romance woven together with a realistic military situation.

That’s actually what I do, as an author. My specialty, if you will.

My journey into writing love stories about U.S. Marines is pretty direct. I have never served in the military, but I have worked in law enforcement. There is a lot of crossover. Quite a few of my family members left the military to become law enforcement officers. I grew up in San Diego, where there are more Navy and Marine Corps bases than there are schools. Okay, not really, but almost. You get the idea. Growing up and into my late 20s, I was very close to my maternal grandfather. He had served in the Marines during WWII, and had been one of the founding members of 3rd Reconnaissance Battalion. This all mixed together to become an extensive knowledge base and understanding of all things military, quite specifically, the Marines.

When I got all grown up, I noticed how inaccurately both cops and Marines are portrayed in books, movies, and on television. I desperately wanted to read good books about these characters, that didn’t have glaring errors or clearly indicate that authors had no military knowledge at all. You can tell from my books that military personnel have ways of thinking and speaking. As a sub-culture, they have a language of their own. I understand all of this, and can tap into it. I’ve explained before that it’s a lot like spending your first ten years in another country, speaking English as well as the local language. If you move to the U.S. at the age of ten, it becomes the language and culture you most closely identify with, but you can still access everything from your first ten years.

That’s just one piece of the puzzle, though. My characters are very crucial to my stories. I would say they’re more important than my stories, but I know many would argue. In any event, people who thrive in the military culture, have certain personalities. They also go through a process of socialization and conditioning while in the military. What this means is that military characters have to be created in a specific way for them to be realistic. First of all, they’re emotionally reserved. They aren’t overly talkative, especially when it comes to their feelings. They tend to prefer actions over words. They possess an inclination to ‘protect’ their loved ones from the ugliness of their professional lives. They need something pristine as an escape, so they attempt to keep the two halves of their lives separate.

Anyway, I first tried writing military characters and military themed stories, because I believed I could do it better than in some of the things I was reading. And I’m not just talking in the m/m genre. It’s a widespread issue. So, I sat down and wrote. I edited, I re-wrote. And I wrote again. I went out and found editors and beta readers who I knew could be very critical and push me to be better. I wrote, they corrected me, and I re-wrote. I grew from simple stories of 2,500 words, to my sweeping 100,000 word epics.

It’s one thing to write a series of stories that are strictly about two people falling in love. Obviously, I love a good romance. I wanted to do more, though. I wanted to write realistic, believable (yet, fictional) stories that would serve as the backdrop for the love story. It’s a commonly used technique, but I looked around for something that either affects, or only occurs to military personnel. I start with that kernel of truth, and from it I develop my own story and draw my own conclusions. It’s a really big game of what-if, for me. My characters think, speak, act and react to the fictional situations I devise. I weave the love story in and out of the fictional plot, until they’re hopefully, seamless.

Here’s how it all worked for my latest story, The Final Line. Corey Yarwood is a small, secondary character who first showed up in Brothers In Arms. He reappeared, a little older and more mature, in Fire For Effect. When it came time for his own story, I aged him and promoted him, giving him a few unpleasant experiences to make him interesting, but also to give him some baggage. I created a love interest for him who is just different enough to create some conflict, but different in ways that balance Corey out a bit.

You pretty much have to be living under a rock, these days, to miss the fact that our military veterans are battling against Post Traumatic Stress. I gave Corey a case of PTS, and was careful to realistically portray the symptoms, as well as the treatment. I didn’t make anything easy. Corey suffers, and it takes him some time to heal. Even then, it’s not perfect

Also, if you pay attention to national news, you know that there have been some incidents that have occurred, resulting in military personnel being prosecuted. I created an event that would serve as a war crime, and would feasibly lead to stateside prosecutions. What better incident to trigger Corey’s PTS?

Finally, returning vets are suffering high rates of domestic violence. I used a local incident as a jumping off point for a plot point that sets the entire story in motion. If Corey was affected by an incident in Afghanistan, others in his platoon would be as well. If Corey battles to overcome his PTS, would there not also be someone who sank into darkness following this event? And what would happen if everyone got together to cover up this event? Who would take the fall when someone set out to uncover the truth?

What really sets my books apart from others written about military characters or situations, is the authentic flavor of my narrative. I tell the story I have designed using military jargon, dialog with the cadence of military-speak, and realistic combat scenes. I drop the reader into the story and tell them what it’s like to feel the recoil of an M16. I describe the tooth-rattling, ear ringing feel of being close to an explosive detonation. I write authentic radio chatter, right down to unit call signs. I make the reader’s heart pound and their blood race, as if they were right beside Corey in combat. My military situations could happen; they’re actually possible. My Recon Marines execute real-life missions. They’re not Navy SEALs single handedly saving the White House.

I admit it! I love stories like that! But I set out to do something completely different. The rogue SEAL has been done to death. I set myself apart by going for realism.

If you have any questions about me, my background, or about anything regarding one of my stories, leave a comment, I’m happy to answer.

Curious about Corey and The Final Line?

Here’s the blurb: Staff Sergeant Corey Yarwood is an instructor at the Basic Reconnaissance Course. His last deployment ended in horror, but he can’t remember those events. Battling severe PTSD, Corey’s drinking is growing out of control. Sean Chandler walks into a dive bar, and into Corey’s life. An actor and a musician, Sean has the empathy and compassion to sooth Corey’s pain, and the strength to support him as he struggles to heal. Corey’s lost memories are pivotal to a civilian murder, and a military investigation. Remembering could mean salvation, or destruction. Will the truth be too much for Sean to handle? 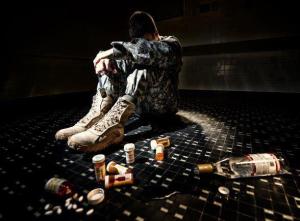 NOW FOR THE FREE STUFF!

Thank you so much for joining me here, and good luck to everyone with the drawings! 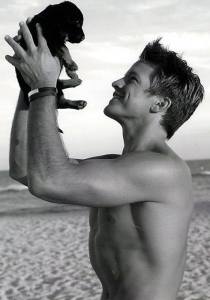 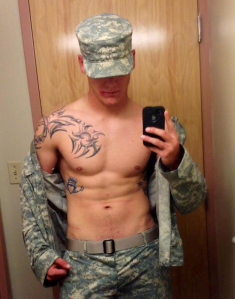