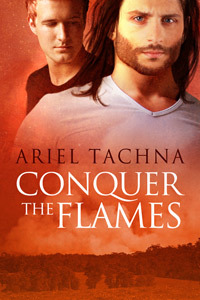 Thorne Lachlan, a firefighter for the Royal Fire Service, arrives at Lang Downs when a grassfire brings him onto the station to ask for assistance and prepare them for evacuation if necessary.  A former Commando for the Australian Army, Thorne has retired, beset by nightmares and blackouts, a  victim of PTSD.  Lang Downs is a sheep station unlike any other Thorne Lachlan has been to.  With homey cottages ringed with gardens to the people who live there, Lang Downs starts to cast its spell over a man clearly in need of  both sanctuary and home.

Then Thorne meets Ian Duncan, a long time resident of Lang Downs and the attraction between the men is both immediate and mutual.  But both men are afraid of committments and relationships.  Thorne because he fears he is a danger to all around him because of his PTSD. And Ian? Ian hides a deep secret that he had only told one man, Michael Lang, when he first arrived at Lang Downs at the age of 20. That secret has kept Ian a solitary man among friends on the sheep station, alone with his woodworking and small house.  Still, neither man is capable of staying away from the other and slowly they begin to build a relationship and hopefully a future together.  However, their pasts combine to raise up obstacles to their future.  Thorne and Ian must face down their demons and get the help they have long needed before they can have a future together.

Conquer the Flames is the fourth book in the Lang Downs series and it comes close to being my favorite story yet.  I had to wait several days to think about this review and why so much about this book spoke to me.  And even now I am still not sure I can answer that question with a clear explanation.

In many ways, Conquer the Flames has a slower, deeper feel to the story as well as the men at the heart of the book.  And that’s unusual considering the title and the profession that Thorne has found himself in as a firefighter.  But if you are to continue the analogy, this is much more a slow burn than a fast moving line fire as the basis and the fuel for the flames have a deep foundation in both mens past history and traumatic events.

Once more Ariel Tachna has taken great care in building her characterizations to go with the beautifully created landscape and setting that is Lang Downs.  Thorne is unlike any character that we have met here before.  He is a former Commando whose time in the Army has left him with PTSD.  He has anger management issues, blackouts and nightmares. And that doesn’t even begin to cover the events in his past that sent him running into the Army.  Ian Duncan is also a damaged soul.  His is a deep trauma inflicted in foster care and one he has never recovered from, even 20 years later.  Both men are so marvelously crafted that it never occurred to me to doubt their authenticity or backgrounds.  They feel so real, their problems and issues are so painful that the reader hurts along with them.

Tachna has treated each man’s problems with the gravity necessary when speaking of PTSD and abuse.  She gets the symptoms right as well as the need for outside medical assistance to help each man overcome years of denial and repression.  There are no immediate cures, no easy answers, just the accurate portrayal of time and the hard mental ,emotional work necessary to recovery and healing for each of them.  The author also sidesteps a common flaw when writing about such damaged characters, and that would be a quick sexual relationship and instant love.  Thank goodness none of that is found here.  I think it would have not only ruined the relationship’s credibility but destroyed the story for me as well.

This is a romance but it is a simmering one.  There can be no flashfires between men as hurt and broken as these two.  Instead we get a slow buildup of trust and understanding that is as sweet and fragile as it is satisfying.  Once you read this remarkable love story, you will understand it completely when I tell you I read and reread certain passages just to savor the scene and the emotions that were flowing over the pages. On more than one occasion I had to grab a tissue or two but they were honest tears brought forth by the real emotion and pain felt by Thorne and Ian, and of course the reader.  Just a remarkable job by the author in every respect.

As with the other books in the series, all the other characters, including Caine and Macklin, are here and well represented.  This story takes place five years after the events of Outlast The Night (Lang Downs #3), but the gap of time feels as seamless as the flow of seasons over Lang Downs.  We see the couples settling into their relationships and lives on the sheep station, the young children are getting older and new ones are being born.  And new people have been introduced to the series that just might make their way onto the sheep station just as the others such as Michael’s Lost Boys have found their way there too.

For the characters involved, and for the reader, Lang Downs remains an extraordinary place.  Its a location where once we arrive, we don’t want to leave just like all those people who have found the path to Lang Down and home.  I hope that Ariel Tachna has many more stories planned for this series.  I  intend to be there for each and every one.  I am putting Conquer The Flames on my Best of 2013 list.

Cover art by Anne Cain is as beautiful as the story within.

Books in the Lang Downs series in the order they were written and should be read: