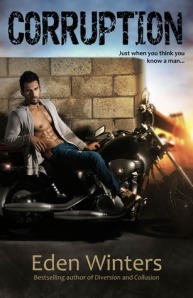 SNB Agent Simon “Lucky” Harrison has had many lives and just as many names. He started life and entered criminal life as Richmond “Lucky” Lucklighter.  He exited life that way too when it  became necessary to fake his death as a part of a pharmaceutical drug operation that turned ugly and ended up with Lucky “fatally” injured in the hospital.  Now Simon “Lucky” Harrison is a successful agent at the Southeastern Narcotics Bureau.  He is still recovering from his leg injury he incurred during the last drug bust when a new illegal drug operation comes to light.  When a young business woman dies on a dance floor from an overdose of bath salts, she is but the first of many.  The SNB clues lead to a local motorcycle gang and Lucky thinks he is the one most likely to be chosen to go undercover.  But his bosses have another idea.  They choose Bo, Lucky’s partner and love, although he would be the last to admit it.

Former Marine Bo Schollenberger, now SNB Agent Bo Schollenberger has turned his new career into a huge success.   Now his bosses at the    SNB want him to impersonate someone else. Someone named Cyrus Cooper, a bad ass drug dealing biker, a total opposite from the real Bo.  Bo has been taking  classes in undercover work and excelling at adopting various personas to everyones amazement.  But Bo is hiding a secret about his chameleon-like ability, one that just might get him killed or at least lose the man he loves, Lucky Harrison.

Soon Bo is deep undercover and becoming a man Lucky would never recognize.  Brutal, ruthless and deadly, Bo settles things with his fists or a gun and soon rises to the top of the organization.  When another agent dies, Bo needs another man to be his backup and guess who arrives?  But has Lucky arrived too late to save Bo?

With the third book in the Diversion series, Corruption by Eden Winters finds the two main characters at a crossroads in both their careers and their relationship.  In the last outing, we watched as Lucky finally realized that he loved Bo but he had  problems vocalizing his need as well as his love, while Bo was able to tell Lucky he loved him.  That emotional change and uneven state of affairs brought about new issues for Lucky, a man unsure of his position and ability to give Bo what he needs, including a stable relationship and a home.  Bo also  seemed to realize the many challenges ahead if he wanted Lucky in his life.  Corruption begins with both men questioning the relationship and their ability to go forward with a future together.

I love the complexities that Eden Winters continues to build into this series as well as her main characters.  In each new book, she adds new layers and textures to their relationship while revealing more of the depths to each man’s character and past.  Lucky has to be one of the most unusual main characters in  recent m/m romance or any romance for that matter.  A former drug lord’s boy toy and thief, he now works for the same agency that put him away.  But Lucky’s past is only as far away as the next emotional crisis of which there are many these days.  As Walter, his boss and father figure, presses Lucky to take on new responsibilities within the agency, Lucky fights to keep everything the same in his life, both his career and his romance with Bo.  Lucky likes the stasis he had achieved with Bo and his job at the SNB and any change throws Lucky off guard, bringing up old and new insecurities as well as painful instances from his past life.  Bo is pressing for changes as well.  Bo wants a commitment and not just a verbal one. He wants a very specific physical acknowledgement that they are on the same mental and emotional page with each other and Lucky is reluctant to give Bo what he wants.

As the story is told from Lucky’s pov, the reader has an intimate knowledge of Lucky’s thoughts and feelings as Bo presses for more than Lucky is able to give him at the moment.  We understand that Lucky can’t figure out why he is having problems moving forward while knowing exactly what is behind  Lucky’s refusal to change his relationship with Bo because Eden Winters has crafted a man whose motives are elusive only to himself and not those around him.   Equal in complexity to Lucky is the character of Bo Schollenberger.  His depths are still forthcoming as is the pain he continues to carry around with him from his past.  Bo’s position within the SNB has been changing with each book.  Bo has been steadily acquiring new skills and respect within the agency to Lucky’s consternation and pride.  One issue Bo has had in the past has been his emotional involvement with the people he has met undercover and this new case will test everything about Bo, from his character to his ability to continue to work for the SNB.

When Bo goes undercover as Cyrus Cooper, Winters creates yet another fully realized character, only this persona lays overtop a character we already know and love.  Cyrus Cooper is Bo’s complete opposite and yet he is Cyrus Cooper, a fact that not only the reader has to recognize but Lucky as well.  This is quite an achievement by Eden Winter.  She gives us two completely real yet opposing characters inhabiting the same body and makes us believe in both of them.  And then she elevates this aspect of the story by having Lucky relate in different ways to Bo and Cyrus, changing his approach to each man emotionally and sexually.

And as if all this is not enough, Winters throws in multiple plot threads, a charismatic and scary motorcycle gang lord, and a drug bust that ends in a shocking revelation that changes everything for Lucky, Bo, Walter and the SNB.  It is a bit of a cliffhanger and still this is an incredibly satisfying book.

Eden Winters introduced us to the regulations and corporate structures of the pharmaceutical industry and made them seem as foreign and obtuse as any business that has been twisted for criminal means.  It has been a real revelation and a remarkable foundation for this romance action series or whatever you want to label it.  I find myself hesitating, not wanting to put the  limitations of a label on such a unique and revelatory series and cast of characters.  I only know that I want and need more of them and the dubious path that Winters has laid out before them.  It’s an amazing journey and I know you will want to be here with me every step of the way.

If you are new to the series, don’t start here.  Go back to Diversion and start at the beginning of this marvelous series.  Here are the books in the Diversion series in the order they were written and should be read: