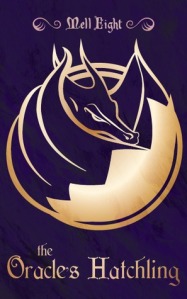 Ling was 18, old enough to be tested no matter his parentage.  Yet the Masters barred his way into the testing chamber when he arrived at the choosing ceremony.  forcing him to steal his way into the Oracle’s chambers.  It wasn’t his fault that his birth killed his mother, but that didn’t stop everyone at the Monastery from reviling him nonetheless. But when Ling is tested, the mark on his back is that of an egg instead of one of the four castes, leaving Ling in a worse position than when he went in.  Mocked and hated and now further separated by his tattoo, Ling obeys the Oracle when she sends him off to find employment and a life in Altnoia.

Once Ling has settled into life in the castle’s kitchen, he accidentally falls into a plot to overthrow King Edan and the Oracle who supports him.  Behind the plot is the son of the man who killed the royal family and  usurped the throne. The twin princes and their dragon killed his father and now Prince Damarion lives alone, angry and plotting in the dungeons below.  But Ling understands the pain behind the mask that  Damarion wears and starts up an unexpected friendship with the vengeful prince.  Neither man is prepared for the relationship that follows.  And where it will lead them only fate and the Oracle knows.

Not quite a continuation of the first story,  The Oracle’s Hatchling, the tale of Ling, the Hatchling of the title, is set after the events that took place in The Oracle’s Flame.  The twin Princes and Dragon now hold the throne of Altnoia but the effects of the treachery by the King’s brother continues to spread throughout the kingdom.  At its center is the son of the man who killed his brother and most of his brother’s family.  Now an orphan, Prince Damarion is the focus of all the rage and hatred the people of Altnoia felt towards his father.  Brooding, sulking, and somewhat petulant, he still remains a sad figure, one who has isolated himself from Prince Edan and the other residents of the castle.

Mell Eight manages to take two young men, different in status but not in the manner in which they both were made outsiders by events outside their control, and make them both realistic and worthy of our compassion.  Ling has suffered the worst, he lost his mother and then any place he might have had in the caste societies that live within the Monastery.  Constantly taunted and belittled, his only hope for something better, goes seriously awry or so the author makes us think.  The descriptions of the relationship between Ling and the Oracle are tender and bittersweet, almost guaranteed to bring forth a tear or two. And the moment in which Ling leaves the Monastery and everything he knows for the outside for the first time is something we can relate to, that first step into an unknown future that requires you to leave home maybe forever.

Damarion is another recognizable character.  And by that he feels like that older teen, twenty something young person, who is angry over the things that have happened in his life, things he had no control over and has acted impulsively to the detriment of all.  Our papers are filled full of these young men.  And Damarion’s anger, and sense of indignant self- righteousness and pain makes him an easy target and tool. Again we can understand his behavior and general outlook. Concentrating on only two characters made Ling and Damarion more fleshed out then the Princes because I felt we got to know these characters better. And how Mell Eight brings those two together seems just right as does the communication that starts the relationship between them.

In The Oracle’s Hatchling, we see the kingdom from the viewpoint of those that serve the most basic necessities of the castle.  The cooks, and household staff which is a nice contrast with those scenes where we are reunited with Dragon and his Princes.  There are some wonderful action scenes.  But my favorite? That has to be when we finally see what is behind that egg on Ling’s back.  That is so magical, so imaginative, that as much as I liked the entire book, that made the story for me because it was so unexpected.

Mell Eight intends to write a story about each caste in the Monastery and maybe one more that contains a surprise.  I really don’t know how she will top the surprise in this one.  I can’t wait.  The first story is obviously the Fire Caste with Dragon.  Ling’s Caste is something of a surprise which takes some explaining (see the author interview later this week). While you don’t necessarily have to read The Oracle stories in order, it certainly helps to understand the events and timelines that occur.  I continue to find the Oracle and her Monastery fascinating.  The Oracle’s Golem is next. What will the Earth Caste bring? I can’t wait to find out what is in store next for this magical series.

The first story was m/m/m, or should that be m/m/dragon?  This one is m/m.  No matter, both are imaginative and wonderful, the descriptions vivid and the action engrossing.  I loved the fantasy and Mell Eight’s world building and think you will too.  Pick them up and start reading.  The third is coming soon.

Cover art by London Burden.  I like the simplicity of the cover and the branding design for the series.

Books in the series include:

3 thoughts on “Review: The Oracle’s Hatchling (The Oracle #2) by Mell Eight”