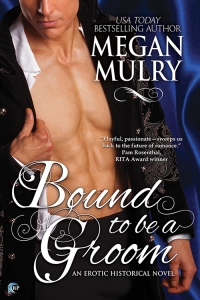 Badajoz, Spain – June 1808.  Anna Redondo has ambitions that stretch far beyond the cloistered walls of the Abbey of Santa María la Real de Las Huelgas, the convent she grew up in.  Instead of feeling safe, Anna feels confined and suffocated by the quiet, contemplative life she lives just because she had been born out of an affair her married mother had with an Englishman.  Only her forbidden love for Patrizia “Pia” Velasquez Carvajal, another girl who has grown up with her within the convent walls, has kept her from rebelling against the nuns and the harsh Mother Superior who rules the convent.

Inexperienced and without means, Anna has decided that the path to freedom and a future together for her and Pia is for Anna to become a wealthy courtesan.  It would give them money and her the life of pleasure she has been dreaming about.  But first she needs to acquire the sexual skills that all courtesans have and for that she needs a teacher. Two weeks after leaving the convent, Anna attends the wedding of another girl from the convent. At the wedding party Anna spies the handsome Sebastian de Montizon, a wealthy hedonist who also happens to be discreet and kind.  Just the sort of man who would make the perfect teacher.

Sebastian de Montizon is a Spanish aristocrat of great charm and large forbidden desires.  Surprised to be approached by a seemingly prim and proper convent miss, he is even more astonished by her frankness and her seductive entreaty.  But no one could have prepared Sebastian to find in Anna a Master for his need for submission.  One marriage proposal later and Anna has found a husband and a new life.  After the honeymoon, they set off to for the convent to retrieve an unsuspecting Pia who has been waiting for her lover to send for her.

Patrizia “Pia” Velasquez Carvajal was an orphan abandoned at the convent.  Kind and gentle, tall and beautiful, Pia found a deep and abiding love with Anna. Bereft of her love and alone, Pia has been waiting for Anna to send for her but never did she think that Anna would marry and betray her love.  When the newly wed Sebastian and Anna de Montizon arrive at the convent to pick up Pia, she does not know what to expect.  All she knows is that her heart is breaking. The truth of their union and their reasons for retrieving Pia are beyond anything Pia could imagine as is the threesome they soon become.

But Sebastian has a past with another and more desires than the girls realize or satiate.  And that leads the three of them to London and Farleigh, the Duke of Mandeville.  Farleigh and Sebastian became lovers when Farleigh visited Spain as a British envoy two years prior.  Since then Farleigh has had many male lovers but none of them have made him forget the beautiful Spaniard he left behind, one who so eagerly submitted to his every whim and desire.

Now Sebastian has descended upon London with a beautiful Spanish wife and her gorgeous friend in tow.  The three of them seem to have a special bond between them, one that Farleigh soon grows jealous of.  As Farleigh gets reacquainted with Sebastian, the old flames of desire reignite.  But Farleigh never expected to find that the bonds that Sebastian had with Anna and Pia would open up to include him and that three would become four and complete.

Bound to be a Groom is set against the backdrop of the Peninsular War (1808–1814) when Bonaparte invaded Spain and usurped the Spanish throne, making allies of the British and Spain. The ensuing political unrest and uprising by Spain is a perfect setting for the rebellion and emotional upheavals to come when a young convent miss, Anna Redondo, sets out to find a way for her and her lover Pia to be together outside the convent walls they were raised within.  Although the civil unrest and political intrigue of that time is used as a framework for Mulry’s plot, it only lightly intrudes here and there throughout the narrative that builds around four lusty gorgeous people and the polyamory bond they ultimately achieve. Lt.-Gen. Sir Arthur Wellesley, commander of the British expeditionary force, makes an appearance briefly during a ball to meet with Sebastian.  Sebastian acts as courier to bring details of the French movements in Spain to Wellesley.  Other than a few more mentions of Wellesley’s battles with the French army and the subsequent outcome, nothing more is made of this fascinating era. With such a dramatic backdrop I couldn’t help but think what a deeper element of intrigue would have on this group.

Instead the plot concentrates on the plans of Anna Redondo whose motives start out purely as a means to achieve her goal of a life with Pia and enough wealth to support them both.  Then her plans are hijacked almost immediately upon meeting Sebastian a sybarite who teaches Anna to enjoy male/female sex and who finds he lusts to submit to her domination. The sex scenes are explicit and totally sensual no matter what combination is in play at the time.  As Mulry adds to the foundation couple with her other main characters, the bonds of intimacy and love grow along with the kinks that are explored between them.  As it happily turns out, there are two doms, one male and one female to two submissives and how that is juggled emotionally as well as physically is another wonderful element here.  The emotional scenes between characters carry as much dramatic heft as the sexual ones do, another reason I enjoyed this story so.

Because as Mulry makes clear, there is more at stake than just sexual gratification.  There is the emotional commitment all four people make to each other that’s of the highest priority. Given the times and the need to be circumspect, the couples have to find a way to hide their bond in plain sight and the resolution is one that will satisfy everyone.

For me, the only drawbacks to Bound to be a Groom would be that perhaps the author included more details than was  necessary.  I liked some of the historic information here about the Peninsula War but it played such a minor role (a small incident then it disappears) that I felt its role in the story should have been a little more prominent.

And then there are certain “nitpicky” things that pop up that are certainly irrelevant to the story (and most readers) but drive me a little crazy.  At one point in the exerpt below Sebastian and his friend are showing off their riding skills in Feria.  It is just a throwaway fact but it stopped my reading cold.

After the two caballeros had finished showing off, one of the grooms brought out another pair of quarter horses in need of exercise. They were skittish and excitable. Anna watched quietly as Sebastian dismounted and traded the reins of the horse he’d been riding for the more frantic of the two. Isabella was right after all: he was powerfully handsome. He rubbed his big, strong hand against the horse’s satiny chestnut coat, following the contours of the quivering muscles along the beast’s neck.

What line? The mention of the quarter horses rode by Sebastian and his friend, Javi in riding ring.  In 1808, the Quarter Horse, a truly American breed, was still evolving into the hugely popular horse breed we think of today.   It was a horse of the frontier and of Texas where its breed was standardized.  The breed or types of horse that Sebastian and his friend more likely to have been riding would have been the Andalusian (PRE) or an Andalusian-Thoroughbred-Arab crossbred horse which was common then and immensely popular for use throughout Spain.  An insignificant notation?  Yes, it is.  But it’s inclusion was unnecessary in my opinion as its effect was that I had to stop and think about the statement. Then because I found the mention peculiar, I stopped reading to research the idea of  there being American quarter horses in Feria instead of concentrating on what was happening between the couples on the page.

Another quibble was the use of Spanish  terms (not proper nouns which would have made sense) in the dialog between Spanish main characters. We know Pia, Anna, and Sebastian are all Spanish and would assume they are speaking in their native language.  So why sprinkle Spanish words throughout their conversations when all of their dialog is supposedly in Spanish?  Here are some examples:

“He hustled her into the castle along with the sea of other guests. He knew the layout of the alcázar from several visits in his childhood.”

Castle and alcazar are one in the same (or in this case  exactly same place they were strolling through), not a proper name of a particular site.  Then in some cases, the english/Spanish tradeoff is just plain informative. Ex.

“If anyone glimpsed them talking, it would appear they were discussing something of little importance, the violinist or the membrillo that had been served after supper.”

I get that the author was trying to bring us more into the setting by sprinkling some Spanish vocabulary throughout but it ended up seeming more out of place than a subtle use of location and nationality.   With this type of usage  then Anna would have said “Stupido, stupido woman!” instead of Stupid, stupid woman! Which was the line (and definitely made more sense than mine). And then of course,  this sort of thing disappears all together.

Would this bother most people? No.  Would it interfere with their enjoyment of the book?  Absolutely not.   But for me, it just shows that even the most insignificant detail can trip up a reader as well as the break in continuity.

Those two minor issues aside, I throughly enjoyed this story.  Mulry’s characters were well drawn, the dialog seemingly keeping with the times and her erotic descriptions downright sensual in conveying the delight and passion of all the characters in the joy of sex and the emotional commitments they make to each other.  Each main character had enough flaws and strengths to them that they felt alive in their confusion, bravery, and total determination to make their goals and promises to each other work.  I liked that the women were just as strong as the men and of course, they all got their HEA.

Cover art by LC Chase includes that absolutely gorgeous torso but nothing about it says historic novel.

3 thoughts on “Review: Bound to be a Groom by Megan Mulry”