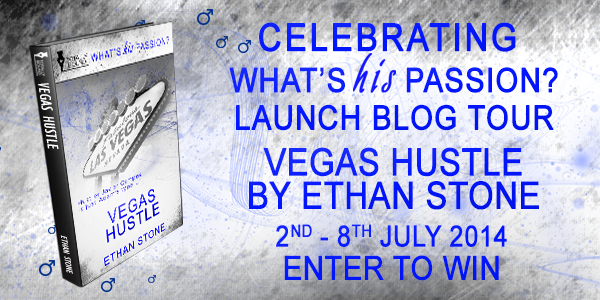 ♦Contest:  To celebrate the launch of What’s his Passion? Totally Bound is giving away a bundle of prizes. Enter here for your chance to win! Must be 18 years of age or older to enter. 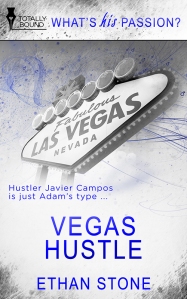 A business trip to Las Vegas becomes a life or death situation for a comic book fan.
Comic book geek Adam Brand is young, good-looking and wealthy. He’s also a virgin because he’s not skilled at picking up guys. While in Vegas with his friend Dean to finalize a real estate deal, he throws caution to the wind and hires a professional. Hustler Javier Campos is just Adam’s type and his first time is perfect.

“Yes, I’m looking forward to our other plans, too.” I smirked.

He leaned forward and eyed me. “Dude, we’re talking about you having sex for the first time and you sound like it’s just another day.” Dean had a fake ID and had gotten one for me as well. He’d been going out to bars and clubs and having sex with men since he was sixteen. He’d promised me we would party until we found the right guy for me to sleep with.

“I’m nervous about it,” I admitted.

“Adam, it’s going to be awesome.” He sat back in the chair and closed his eyes.

“Did you see that Hispanic stud in the hallway earlier?” I’d only gotten a quick glance at him but it was enough. He was a few inches shorter than me, had a goatee, light-brown hair and beautiful brown eyes.

Dean lowered his sunglasses. “You know he was a hustler, right?”

I forced my jaw closed, trying not to let my naiveté be quite so obvious. “How do you know?”

“There’s no way a dude like him could ever afford to stay at the Bellagio. He’d probably just finished with a customer.”

I knew hustlers existed, but the ones I’d seen and imagined were dirtier and skankier than the hottie in the hallway. “You ever hired one?”

He shook his head. “I don’t see anything wrong with it but I’ve never needed to pay for sex when it’s so readily available.”

I wondered what the man charged. He had the body type I craved as well as a rough edge that made my body tremble. Being kissed and touched by him had to be a thrilling experience. A man who got paid for sex was no doubt good at what he did.

Want to find out more about the characters from Vegas Hustle? 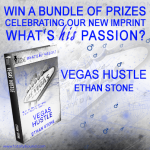 You can purchase it here!