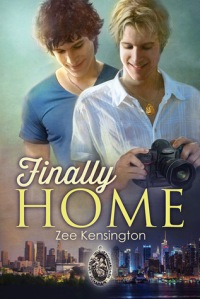 Bangkok, Thailand. 2011.  Seasoned traveler and noted cuisine writer Christopher J. Springer meets/rescues Marco Mineo at the airport.  Marco is making his first trip away from home and chose Thailand as his destination only to be overwhelmed upon his arrival.  Meeting Chris changed his life as the culinary author takes Marco under his wing, showing him the true Thailand over the next 10 days.  But it was more than that.  During that time, Chris and Marco became lovers, another first for Marco, a closeted gay at home.   When the time came for Marco to return home and Chris to journey on to his next destination, neither was prepared for how much it hurt to part and how deeply they would miss each other later on.

Los Angeles, CA.  Once home, Marco finds himself sliding back into a life that’s no longer enough to satisfy him.  He’s unhappy about working for his uncle, he’s throughly back in the closet because of his fears, and he’s missing Chris more than he ever thought possible.  Then he gets a text from Chris who is coming to L.A. and everything seems possible and scary once more.

Chris has traveled the world, free to go where he wants and hook up whenever it was possible with no strings attached.  But something changed in Thailand when he met Marco.  Now in Mexico, Chris finds his thoughts consumed with the young man back in L.A.  When his publisher cancels the third leg of his assignment and offers him a replacement city in the U.S., Chris jumps at the chance to see Marco again and chooses L.A.  The Marco he finds is a deeply unhappy one.  Chris understands Marco’s fears and hopes to help him slowly out of the closet.  But a family crisis pulls Chris away and Marco is left to decide what and who is important in his life.  His fears that keep him in the closet or his love of Chris?

I was reading the anthology Two Tickets to Paradise when I came across my first Zee Kensington story, Krung Thep, City of Angels.  That story blew me away.   From the moment Marco steps off the plane onto the runway at Suvarnabhumi Airport in Bangkok and meets Chris Springer, the author pulls us deep into the Thai culture, from the street food vendors to the back alleys of this mesmerizing city.  Her descriptions of the food  made my mouth water and the vivid imagery of the sights and sounds of Bangkok had me itching to catch the next plane out for my own adventure.  And the relationship that sprang up between Marco and Chris in that short story?  Believable and sort of magical.  It was one of my favorite stories in that anthology for good reason.  So imagine my joy in finding Finally Home, the sequel to that amazing story.  My only trepidation?  Would it measure up to the original I remembered so well?

Well, yes and no.  And no, primarily for just one reason.  That only the prologue takes place in Bangkok.  Here the author brings those readers unfamiliar with Marco and Chris up to date on the circumstances of their first meeting and the beginning of their relationship.  Readers, its not nearly enough.  Run, don’t walk and grab up that story.  It’s a must read.  But the prologue does a good job in bringing some of that initial magic home here.  Than this story really gets started in Los Angelos, Marco’s home.  Again, Zee Kensington applies her wonderful skills in bringing places and people to life.  For Marco comes (and lives) with his very close knit Italian family where the very idea of personal space is lost.  His mother is constantly fixing her son up on blind dates with women Marco has no intention of ever seeing again.  For reasons that will be revealed in the story, Marco has a very good reason for remaining in the closet at home. And his love for his family, which telegraphs beautifully in scene after scene , makes his fear realistic and at times overwhelming.  Helping Marco stay closeted is his uncertainty about his relationship with Chris.  He has so little experience that he’s afraid to ask Chris where they stand.  And again we get that too.

Kensington has chosen to make Chris nine years older than Marco.  It works as Chris has been traveling for years.  But while Chris is a seasoned world traveler, he is almost on the same level as Marco when it comes to commitment and relationships.  He too has had problems with his family over his homosexuality so Chris understands Marco’s fears of abandonment.  That’s a nice touch.  I thought the dynamics between Chris and Marco worked because Chris isn’t trying to push Marco further than he can accept, knowing it must be Marco’s decision.  There is also a nice playoff  between their ages, backgrounds, and yes, experience.  It works on all levels.

What did I miss?  The cultural and sensual experience that was Thailand.  Zee Kensington relayed that so well that I felt I was there.  The author’s stay there conveyed a vividness to the scenes and an immediacy to all Marco and Chris’s travels  that I remember today.  In its place are the street vendors of the less visited side of Los Angeles, the truck vendors and the East L.A. food scene.  It’s good but no replacement for the culinary banquet that was the first story.

What will the readers find frustrating?  The realistic give and take, the misunderstandings and the shaky course of  Chris and Marco’s relationship.  It’s a path strewn with obstacles, many of their own making and you will find yourself wanting to give each a shake or two.  But that’s because you have become so involved in their future together and  deeply connected to these characters along the way.  I so hope that this is not the end for Chris and Marco.  There are other places and culinary adventures awaiting them.  I wanted to see them together through Mexico and Kenya.  Perhaps later, one can always hope.  In the meantime, I will reread Krung Thep again and enjoy my taste of Bangkok and the beginnings of Chris and Marco’s journey to HEA.

I highly recommend Krung Thep, Finally Home and Zee Kensington to all lovers of food, travel, and hot men in love.  I can’t wait to see what this author has in store for us next.

Cover art:  Paul Richmond.  While I liked elements of this cover, the model for Chris is just too young.  That throws it off for me completely.

Book Notes:  Sequel to Krung Thep, City of Angels
The Traveler and the Tourist: Book Two
Krung Thep, book one of the series, can be found in the Two Tickets to Paradise anthology.

2 thoughts on “A MelanieM Review: Finally Home (The Traveler and the Tourist #2) by Zee Kensington”