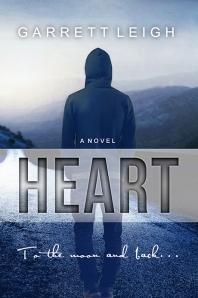 Cornish pastry chef Seb Wright dreads the summer tourist season. The cash injection to his artisan fudge pantry is more than welcome, the extra work, less so. Then one summer, a shadowy Good Samaritan catches his eye. Irish Traveller Dex is bewitching, a beautiful sullen enigma who turns Seb’s world upside down until he disappears in the night, vanishing like a mystical summer rain.   Twelve months later Dex is in the midst of a dark storm. A slave to his master, ‘Uncle’ Braden, he spends his days cleaning caravans and his nights working in Braden’s other businesses. His short summer with Seb seems a lifetime ago. Lost in the savage violence of the murky underworld, he doesn’t dare dream he’ll ever find his way back, until one night, a brutal crime opens the door for a chance escape. A new life beckons, old faces emerge, and immersed in the heady vibe of London’s East End, new love begins to heal his fractured heart.

Garrett Leigh has become a must read author for me since she put out Only Love. That book is still my favorite m/m book of this year. Heart is about finding one self, finding love, what it means to be in love, and family. Garrett Leigh always seems to put us in these dark places and we get to see these guys find their way to the light. From the beginning of the story we are introduced to this amazing man name Seb, for someone his age which is mine, the amount of compassion and love he has is astounding. I’m a sucker for abuse, dark gritty tells, under educated that’s just me. Seb was a twenty-something guy working in a town that he grew up end making fudge. He is about the only good Samaritan around in my opinion. He finds himself walking home one night and he got the feeling that someone was close which they were. It was Dex, beautiful, sweet, homeless gypsy Dex, and what does it do, honest Dex tells Seb he dropped his wallet he did. I think for me from that view point I wanted more Dex, that’s all I cared about. Reading from Seb’s point of view was so satisfying because he was enthralled just as much as the reader was. It’s a point in the beginning of the story where it’s the weather conditions are horrible and Seb see’s Dex underneath an awning trying to stay warm, Seb invites him in for food and shelter. What broke my heart was what Dex said next. He automatically went into thinking what did he owe Seb for doing this for him. As if everyone in the world expect something from a 19 yr old boy.

Things progress from there for a while. One morning Seb wakes up and Dex is gone. Surprisingly I didn’t cry, which I thought I was going to the entire time. The point of view changes to Dex story now, and man did I cry. He went through so much hard ache and pain. I can’t imagine people having to go through this. He was apart of a gypsy carnival. He was a prostitute who never seemed to come out on the winning side. As I don’t like to give away the plot I can only talk about how I felt towards these characters. I felt anger mostly. I felt anger because he had to go on years with out Seb and only have his memories as the only good thing in life. He does get save it’s not sweep off your feet. It’s hard, and Dex worked really hard for whatever he did in life. Those moments in the story pulled at my heart more and more. I really appreciate his growth, determination and usefulness.

Seb Wright is an amazing character. One thing I could say that really gave him an edge was his patience. He was super patient with Dex when they reunited. I loved how Seb was willing to move mountains for Dex. I will continue to support this author as long as Garrett continues to write. I wish I had beautiful words to encompass of how I felt. Sometimes I do have the words, and other times I just write what comes to me. I can say the angst was alive and kicking. I recommend this book to lovers of Garrett Leigh, lovers of angst. People who want to believe and succeed in life. Don’t ever give up is my only words of wisdom.

The cover artist: G.D. Leigh. I liked the cover; it doesn’t give much away for the story. Upon reading the story you kind of guess which character it’s for. The cover does make you feel at peace with what has transpired for one of the main characters.