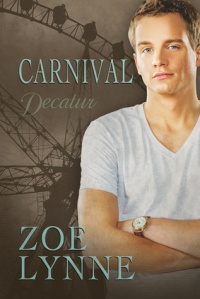 In a world of lights, music, fanfare and fun, there’s not a lot left to the mundane, and nothing can be truer for four special boys whose lives intertwine in a most unusual, unexpected way. They all have secrets and supernatural powers that set them apart from the average small town high-schooler.

Jessie’s world revolves around his family’s traveling carnival. Tate’s busy being the good son to Decatur, Alabama’s first black mayor. Rand knows everyone’s secrets. And Donny wants a family. When sexuality and special abilities become each boy’s focus, a whole new realm of possibilities opens up. With an uncertain road ahead of them, their talents to see the future, hear other people’s thoughts, and manipulate wills might help them change their destined courses and find the right path.

Four boys. Each with his own cross to bear. Just trying to grow up.

Carnival – Decatur is about four boys with abilities that are certainly outside of the norm, who have to deal with their own personal problems and ambitions as well as some things that are much less mundane. The book takes place in Decatur, Alabama, and centers around the Macon Brothers’ Carnival coming into the small town, and Jesse, whose father works in the carnival business and drags his son along from place to place, not something Jesse is entirely fond of.

This book was definitely strong, and I really enjoyed the balance between characters wanting basic things that everyone wants, but also having these special abilities that they had to focus on. I thought every single one of the four boys were strong and the differences between them and what they wanted really helped communicate that. There was strong world building, even for a modern fantasy, and I really found it an interesting book to read. Each of the characters also had realistic flaws, and I have to say that I absolutely loved the fact that there was a main character of color!

Often having LGBTQIA+ representation in books causes other diversity to fall by the wayside and I love seeing books where so many different people are represented, and represented so well. I really enjoyed the plot behind the book, too, although it definitely seemed like a more character driven story than anything else. Which was great, because I think the characters were really well written. There were times with each of them when I loved them, and times when I definitely didn’t, but I enjoyed their stories and was definitely invested in what happened to all four of the boys.

Cover Artist: Allison Cassatta.  I liked the cover of this book. My personal preference is drawn covers rather than photo manipulated, but it represented the book well and I think it would draw a reader’s attention if they were in a book store or browsing online.