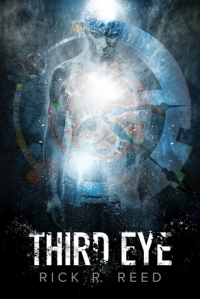 A riveting, nail-biting, thought-provoking, frightening thriller, this story is much more than an M/M romance—it’s a brilliant tale worthy of recognition on the NY Times Bestsellers List.

Cayce D’Amico is just a regular guy raising his seven-year-old son on his own, holding down a job as a waiter at the local diner in the economically-repressed town of Fawcettville, Pennsylvania. He’s young, gay, divorced, and totally focused on his son, Luke. One evening, when he realizes Luke is no longer in his back yard, he sets out to find him just as a thunderstorm hits the area. At the edge of the woods, he’s struck by a broken limb as lightning strikes the tree next to him. Luke is okay, but Cayce isn’t.

Waking in the hospital, he finds it odd that he knows something personal about the aide who touches his arm, and next, he’s struck with images that he soon learns are from a missing girl—one who Cayce can see is dead. It happens again the next day—this time with visions of another kidnap victim. Frightened, but knowing that if it was his son who was missing he’d want help, he goes to the home of the latest victim to offer assistance in finding her but is promptly turned away. Later that night he receives a call from the mother of the first victim, who claims the other mother called her in warning, but that she’s willing to listen to him. The two set out to find the girl, following Cayce’s visions.

Dave Newton is a reporter, if you can call it that in this small town of very little news. A native of England, he followed his lover here years ago—a lover who left him here with only the company of a bottle and a handful of drugs to get by. He’s kicked the drugs but still toys with the booze occasionally—anything to get through the boredom of his life. He’s intrigued by the story of the man who was hit with the limb and when he went to the hospital to say hello, he became even more intrigued by the man himself. Cayce is a nice guy, one who could possibly thaw his heart if he allowed it. It’s Dave who Cayce turns to when he and the mother of the missing girl find her grave. And it’s Dave who offers a shoulder for Cayce to lean on as the story develops, and Cayce is hounded by the press and shunned by the police.

It’s also Dave who supports and assists Cayce as he tries to solve the most important mystery of his life when someone close to him is taken. And when the two rush headlong into an exciting, nail-biting search they get results, just not the results they were looking for.

In this story, the author leads us on an emotional journey fraught with danger and more ups and downs and hairpin turns than an out-of-control eighteen-wheeler. It’s completely different from any of his other works and absolutely brilliant in its execution. Seriously, this ranks right up there with any of the world-renowned mystery writers of our time. The complexity of the storytelling, the attention to detail and the hold-your-breath plotline make this story outstanding. The author keeps the reader on the edge of their seat with flashbacks via Cayce’s visions alternating with scenes of what’s happening in real time to Cayce, and then scenes of the kidnappers and their victims, telling us just enough in each chapter to make the move to the next chapter vital to the reader’s need to breathe. Seriously, this book is very difficult to put down!

The romance in this story is secondary to the major plot with no explicit sex scenes. The attraction between Dave and Cayce develops as more of a true support of one partner for another with some kissing and handholding rather than the hot and heavy sex “on page” that could have been portrayed but would have detracted from the core story.

I can’t recommend this story highly enough. To be honest, I’m not a person who normally reads thrillers, and I never watch horror movies unless I’m forced to do so, and even then I peek through my fingers. I desperately wished I could peek through my fingers at some points in this story, but I was compelled to keep going and I’m so glad I did. The ending was all I had hoped it would be, and the possibility for a happy future for Dave, Cayce, and Luke was set in place. All is well in my world. Don’t miss the chance to read this book.

Caution: This book contains graphic violence and hetero rape with some scenes through flashback and some in real time.

Cover art by Aaron Anderson. Cover depicts a bright light superimposed over the figures of a man and a clock. The light may have been meant to illustrate the visions the man had, and the clock would symbolize time running out. Although I can understand that, I did not find the cover particularly attractive or attention-getting.